The Class Connotations of the Color Pink

Pink, as we all know, is all about gender – it’s for girls.  And sissies.

The University of Iowa… for decades has painted the locker room used by opponents pink to put them “in a passive mood” with a “sissy color,” in the words of a former head football coach, Hayden Fry.

That’s from Frank Bruni’s NY Times op-ed today.  But not all cultures link pink to femininity.  The Palermo soccer team wears pink uniforms as do other European teams.  In the U.S., it was only in the 1950s that pink took on its “boys keep out” message, and even then, a charcoal gray suit was often matched with a pink shirt or necktie.  In The Great Gatsby, set in 1922, Nick writes of Gatsby:

His gorgeous pink rag of a suit made a bright spot of color against the white steps, and I thought of the night when I first came to his ancestral home, three months before.

In the previous chapter, Tom Buchanan says that he has been “making a small investigation” of Gatsby’s past.

“And you found he was an Oxford man,” said Jordan helpfully.

“An Oxford man!” He was incredulous. “Like hell he is! He wears a pink suit.”

Gatsby’s choice of suit colors reveals not his sexuality but his class origins.  An educated, upper-class gentleman – an Oxford man – would not wear a pink suit.  Anna Broadway cites this passage in her Atlantic article and adds,

According to an interview with the costume designer for Baz Luhrmann’s recent film, the color had working-class connotations.

Today, that class connotation is reversed.  It’s the preppie type men at the country club who are wearing pink shirts or even, on the golf course, pants.   That trend may be reinforced by something entirely fortuitous – a name.  The upscale fashion designer Thomas Pink, perhaps because of his name, does not shy away from pink as a color for men’s clothes. 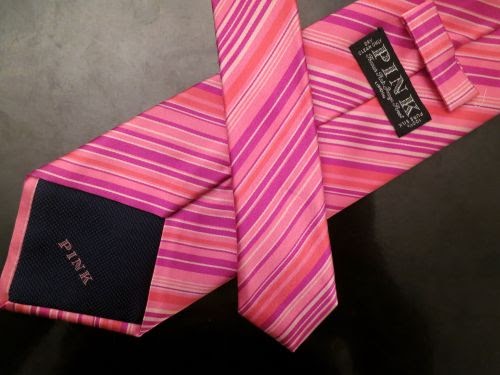 Do you agree that pink still has class connotations?  And how do they intersect with the color’s gendered meaning today?

I definitely think that pink is an "upper class" "preppie" culture. I don't know when the shift occurred, but in 1980s "Offical Preppy Handbook," Pink is considered a "proper" color for men and women. One passage says something to the effect of, "in other subcultures, pink on men may be seen as odd, but in preppy culture, it's almost a requirement. I wonder if it is the idea that, as with many things, the wealthy and established can get away with what the rest of us can not??

I'd say the upper and upper-middle classes have several styles and norms in general that the lower classes would consider incredibly unmanly.

There was a brief burst of pink shirts on boys around 2003-04 at the middle school where I substitute taught. The shirts -- and baseball caps, too, come to think of it -- usually were sports team shirts, but sometimes polos. The kids at this school tended to be children of the working poor or unemployed. Mostly African-American. They also liked to sport big faux diamonds, one in each ear, which I hadn't seen on boys before then. I think I linked that to a musician's look, though I forget who. As a sub (and a nearly-40 white woman), I did not have the rapport to say, "so guys, what's up with this?"

There is another niche for pink among young black men. Google Image say "Kanye pink" or "Jay z pink" and compare to "John Mayer pink" or "George Clooney pink". I will not say I know why, but the most common explanations offered are:
a) Pink among black men was popularized by pimps.
b) Pink is something only a truly masculine man can pull off, and stereotyping of young black men allow them to avoid being seen as feminine.
c) The tradition of dressing up in Southern black churches either innovated or kept alive wearing pink for men.

The pink suit marks Gatsby as "not Oxford" by which is meant that he is excluded from a certain set of English aristocracy or even American old money. It marks him as nouveau riche with an ostentatiously chic style that runs counter to the Protestant Work Ethic aesthetic of dark woolen restraint and conservatism with money. It's too much of an assumption to say it marked him as working class. Most nouveau riche come from the petit bourgeois class.

Pink probably entered the prep dress canon around the same time as Madras plaid with origins during the British Empire's rule of India. The bright cottons of India would have given a sort of man-of-the-world-at-leisure look.

This article is a BIT incomplete. Pink was the color of masculinity until the Nazis began to associate it with homosexuals whom they tagged with pink triangles. Prior to this, boys wore pink straight out of the womb. It was girls who wore blue. In teems of the comment regarding Black males wearing pink. Dark skin and jewel tones look amazing - I've also read that it is in our culture as descendants of Africa to wear items that are flashy and attention getting... Sort of like birds, where the female teems to have darker plumage. Many African cultures have men who dress up in bright makeup and clothing strictly to attract a wife once he reaches a certain age. In teems of American Standard of pink, it is a statement that a man is truly a man of he can wear pink and still not be questioned about his masculinity.

All pink on a little girl on the other hand suggests to me that parents shows no educated interest in gender, stereotypes and upbringing.

A few decades ago (90s maybe?), men wore "power ties." There seemed to be a new color every month. One month they were pink. I also remember a yellow one. Then came graphic print ties with images such as bottles of tabasco sauce on them.

[...] Pink hasn’t always been associated with little girls. Check out this post on the class connotations of the color pink. [...]

I have maybe an irrational dislike of pink clothes on anyone and of pink home decorating. Pink was so unrelentingly forced on me as a little girl that I have never wanted to wear it. I have such a strong dislike and negative connotations that I cannot be objective about the color. At least I can appreciate pink in nature.

[…] is stronger than women’s (though it’s also true that pink can be framed as masculine for select groups of men).  While this can feel timeless, like most aspects of gender, it hasn’t always been around.  […]