When the airline industry first tried to go commercial after World War I, it needed to convince skeptical customers that air travel was safe.  One strategy was to make passengers feel that the entire crew was able and willing to see to their safety. This included the stewards, the all-male precursors to the stewardess. But which men to hire?

The default employee should have been an African American.  Ocean liners and train cars, air travel’s main competitors and the model on which they built their business, largely employed Black porters and stewards.  But the airlines believed that the overwhelmingly White passengers would not have felt comfortable placing their lives in the hands of Black men.  So they hired White men instead.  Kathleen Barry, who discusses this in her book Femininity in Flight, explains:

Equanimity on aircraft circa 1930 was a tall order for anyone, but stereotypes dictated that it would most likely come from white male attendants. With uniforms that echoed the naval-style garb of pilots, stewards reassured passengers that the white men in the cabin as well as the cockpit were competent and in control. 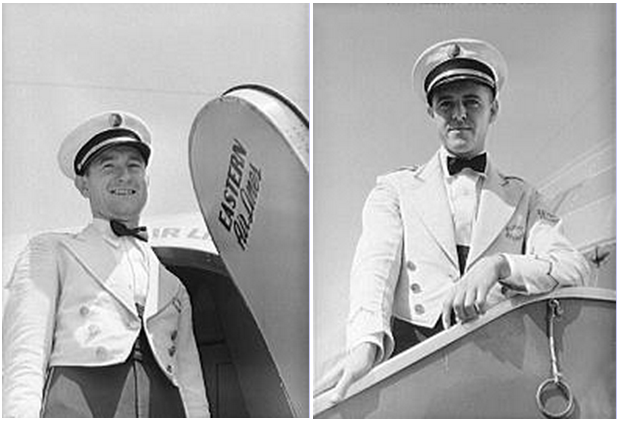 If stewards were so capable and appreciated, why not offer one’s appreciation in cash?  The answer is, in short, because tips were for Black people.  Black porters on trains and boats were tipped as a matter of course but, according to Barry, tipping a White person would have been equivalent to an insult. A journalist, writing in 1902, captured the thinking of the time when he expressed shock and dismay that “any native-born American could consent” to accepting a tip.  “Tips go with servility,” he said. Accepting one was equivalent to affirming “I am less than you.” This interpretation of the meaning of a gratuity, alongside airlines’ need to inspire confidence and simple racism, is why we don’t tip flight attendants today.

Interesting stuff, thanks for sharing!

This (somewhat problematic, to me) article makes a gendered case for the imposed servility of (mostly women) waitresses receiving tips http://jayporter.com/dispatches/observations-from-a-tipless-restaurant-part-5-sex-power-tips/

I lived for five years in Glasgow, Scotland, and our first few months there (2008), we lived in on the fifth floor of a building. Deliveries were made via a temperamental elevator and often arrived on foot. I thought that tipping the wiry guys who climbed all of those stairs was The Right Thing To Do. I was repeatedly proven wrong, and at one instance, the hostility which with I was met - an African American woman passing out two pound coins to young Scotsmen - was really edged and fierce. I guess now I understand why... but, it still makes no sense to me.

I'll need to read her book and see the sources she cites before I comment.

Is it not the case that there were no white men in servile jobs? I find it hard to believe that they did not receive tips if they were not in such jobs? or are the (all the) jobs "raced"?

"In 1916, William Scott wrote a stinging diatribe against tipping in his book, “The Itching Palm,” in which he stood up against the policy of paying for a service twice (once for the employer and once for the employee). He decried tips to be “democracy’s mortal foe” and creates “a servile attitude for a fee.”

In the American democracy to be servile is incompatible with citizenship. Every tip given in the United States is a blow at our experiment in democracy. The custom announces to the world…that we do not believe practically that “all men are created equal.” Unless a waiter can be a gentleman, democracy is a failure. If any form of service is menial, democracy is a failure. Those Americans who dislike self-respect in servants are undesirable citizens; they belong in an aristocracy.

Scott continues, “If tipping is un-American, some day, some how, it will be uprooted like African slavery”."

Ok but now tips are commonplace - at least in restaurants. What explains the current situation? Can't be just history, can it?

there are plenty of places in this world where tipping is not the norm and to do so, depending on exactly where, can elicit surprise and or insult. The reason these stewards are not tipped is that it is generally considered wrong to tip unless the work is considered servile. Of course with the limited view on history many Americans suffer under a simplistic answer is 'racism'.

New Orleans is so POOR, white and black, it's not funny.
But then again, a lot of that is self inflicted as IMO 75% are on drugs or alcoholics. Every where you go, at every function, even business function, there is alcohol.

They are so clueless when it comes to alcohol, they attempt to attract business outside of Louisiana with a wine glass in their hand and shove a wine glass in yours......then they ask, why don't they have any companies in Louisiana, 8 years since Hurricane Katrina...(this is not to mention below sea level, but that's another story.) It's cause they are so wasted from the night before, many don't show up, or show up very very late.

While racism was a reason flight attendants were not tipped in the past, I expect that if this had been different the custom of tipping them still would not have lasted until the present.

If that is the reason why are signs everywhere in NYC - gratuities are welcome!
I found it incredible that the world's richest country engenders a culture of aggressive tip seeking.

US attitudes toward tipping underwent a complete reversal between 1902 (the year of the "servility" quote) and the 1930s. By 1930, tipping had become deeply entrenched in the US, and tipping came to be regarded as almost-mandatory regardless of the race of the service employee.

Tipping was (and is) as deeply entrenched in places where the servers were white as in areas where servers were black. In fact, the six states that made tipping illegal (the laws were enacted between 1909 and 1915) included Mississippi, Arkansas, Tennessee, and South Carolina -- all places where the recipients of tips were frequently black. (Anti-tipping laws were a dismal failure and eventually repealed.)

The most likely explanation for the turnaround in US tipping etiquette during the 1910s and 1920s rests with Prohibition, which began in the US in 1919 . Tipping customs during this period were driven by what was happening in hotel dining rooms; stand-alone restaurants were far less common than they are now.

Before Prohibition, US hotels used the so-called American Plan (meals included in room rates), and tips were used to bribe the server for a better cut of meat, or for a larger server. Managers fought against tipping, since it was a bribe to give away extra food.

Prohibition caused hoteliers -- many struggling to make up for lost alcohol profits -- to reconsider the American Plan. To boost profits, there was a gradual shift to the European plan (meals priced separately from rooms) during the 1920s. This also led to a shift in attitudes toward tipping. Managers, instead of regarding tips as bribes, came to perceive tipping as a supplement to wages, and thus, managers changed their stance and encouraged tipping. And so here we are (at least in the US), stuck with this strange way of compensating service employees.

(I write from Canada, which lagged behind US practice but gradually adopted US-style tipping.)

So, why are flight attendants not tipped? It's true that the first flight attendants were white males. But in the early 1930s, the airlines replaced them with white women nurses. The presence of nurses was intended to soothe nervous flyers; it's also possible that payroll costs were a factor. One would not tip a nurse because nurses were regarded as professionals. That custom eventually became entrenched in FAA regulations.

Tip is the worse thing in this world. I do not understand why should we pay for service twice. Why the restaurant industry do not pay their waiter/waitress their salary? why this is our obligation?. I was so sick with the tip business in New York , that I believe I will never go back there again.

I have been a Registered Nurse for 45 years Nurses are NOT tipped and it would be most insulting to receive one ........ My advise is Employees pay the people who work for you

as a white male flight attendant I always refuse tips. I would like to define myself as a "first responder" but the public continues to see us a form of "wait staff." Although our annual recurrent training is all about first aid and safety drills, conversations with management generally center around a lack of sufficient servility. They just don't use those words.

If a writer is unable to do proof read their work before it's published, then at least use current and accurate facts, please. Flight crews do not accept tips because of tax purposes. They are payed well by the airlines that employ them.

The reason I don't accept tips ,as a flight attendant, is because 9 times out of 10, the passenger is buying alcohol and most often wants to "buy their way"into my liquor cart. You may think I'm a waitress, but I know better.

Barefoot Reading: This Week’s Recommended Stories and Insights from Around the World — September 6, 2013

Such a lot of sh.. We should be tipped as well, service today have no colour.

Here in Mexico tipping sometimes is a must since most people dont earn enough doing services.

Why would you tip someone with starter pay of 20K+ a year ? You tip others because of their low hourly wage comparatively flight attendants have better salaries. Also, please remember that airline crews are earning per diem or expense money as they are flying on top of their hourly wage.

the world would be better when we stop capitalizing black and white, and they dont mean anything any more— at least not to anyone who isnt checking for genetic illness [ie: tay sachs]. that is what the civil rights movement was about. identity politics may be easy, and it may be fun to glamorize yr antecedents while fighting with whoever's are different but, so help me, it also plays right into conservative hands. they got what they wanted; this will become clear later. they've broken up any possibility of radical reconstruction, and filled its place with sideshows and middle class fury.

I feel so uncomfortable with tipping culture in America. When you're not used to it, being called to pull out your wallet every five minutes in a nice hotel when you're already paying an astronomical amount to be there (FOR the service) and trying to understand who to tip, how much and how often is overwhelming, embarrassing and stressful. If only American employers would just pay their staff fairly. Tipping turns every interpersonal encounter with strangers as a tourist in the US into an economic exchange. It's depressing and dehumanising for everyone.