The Trouble with Apple

Suicide at Foxconn. Poisoned workers. Colluding to inflate the price of e-books. Tax evasion (albeit, legal). Shady suppliers who can’t toe the line of labor or environmental laws in China. Apple’s reputation has taken a hit in recent years. Or, so it seems it should have. But, despite the fact that news reports on the company’s behavior and supplier relationships have been more negative than positive since 2012, Apple’s revenue has continued to climb and break records.

In fact, while the press has illuminated terrible labor conditions in the supply chains for iPhones and iPads (with the most recent revelations coming via China Labor Watch’s report on Pegatron sites where the “cheap iPhone” is in the works), sales of these products in particular have soared, and now account for the majority of the company’s revenue. Apple has jockeyed with ExxonMobil for the world’s most valuable company over the last few years, and currently stands second to the oil giant with $413.9 billion. Remarkably, Apple amassed $156 billion in revenue in 2012 without being the industry leader in any of its product sectors (in terms of unit sales), due to the very high profit margins on iPhones and iPads. 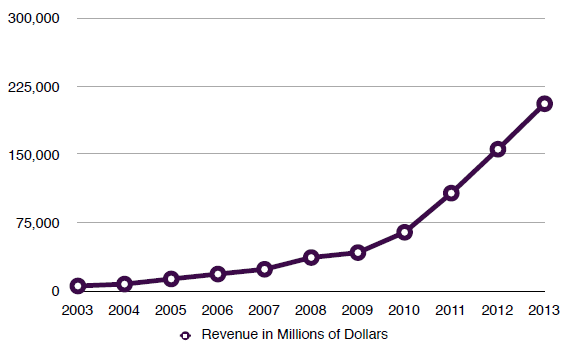 How does Apple maintain this economic dominance in light of negative press that should be bad for its bottom line? How do we, the highly educated consumer base of the company, remain invested in Apple products when work conditions in China and the clever skirting of tax liability grate against our progressive sensibilities? As a sociologist who focuses on consumer culture, I suspect that it is Apple’s brand power that keeps us eating its fruit, and the company afloat. With its iconic logo, sleek aesthetic, and promise of creativity, excitement, and greatness embedded in its products and message, Apple successfully obscures its bad behavior with its powerful brand.

Marketing and branding experts describe a brand as a vision, a vocabulary, a story, and most importantly, a promise. A brand is infused throughout all facets of a corporation, its products, and services, and is the ethos upon which corporate culture, language, and communication are crafted. A brand connects the corporation to the outside world and the consumer, yet it’s intangible: it exists only in our minds, and results from experiences with ads and products.

To understand Apple’s brand and its significance in our contemporary world, I have embarked on a study of the company’s marketing campaigns. I started with a content analysis of television commercials, and with the help of Gabriela Hybel have analyzed over 200 unique television spots that have aired in the U.S. between 1984 and the present. One of the key findings to emerge is that Apple, and the ad firms it contracts with, are exceptionally talented at what the marketing industry calls emotional branding.

In his book named for this approach, Marc Gobé argues that understanding emotional needs and desires, particularly the desire for emotional fulfillment, is imperative for corporate success in today’s world. After studying Apple commercials, one thing that jumps out about them is their overwhelmingly positive nature. They inspire feelings of happiness and excitement with playful and whimsical depictions of products and their users. This trend can be traced to the early days of the iMac, as seen in this commercial from 1998.

An iPod Nano commercial that aired in 2008 takes a similar approach to combining playful imagery and song:

In a more recent commercial, actor and singer Zooey Deschanel, known for her “quirky” demeanor, performs a playful spin on the utility of Siri, the voice activated assistant that was introduced with the iPhone 4S in 2011.

Commercials like these — playful, whimsical, and backed by upbeat music — associate these same feelings with Apple products. They suggest that Apple products are connected to happiness, enjoyment, and a carefree approach to life. To tip the sociological hat to George Ritzer, one could say that these commercials “enchant a disenchanted world.” While Ritzer coined this phrase to refer to sites of consumption like theme parks and shopping malls, I see a similar form of enchantment offered by these ads. They open up a happy, carefree, playful world for us, removed from the troubles of our lives and the implications of our consumer choices.

Importantly, for Apple, the enchanting nature of these ads and the brand image cultivated by them act as a Marxian fetish: they obscure the social and economic relations, and the conditions of production that bring consumer goods to us. Now more than ever, Apple depends on the strength of its brand power to eclipse the mistreatment and exploitation of workers in its supply chain, and the injustice it has done to the American public by skirting the majority of its corporate taxes.

Next: Sentimental Consumerism, the Apple Way.

Nicki Lisa Cole, Ph.D. is a lecturer in sociology at Pomona College. She studies the connections between consumer culture, labor, and environmental issues in global supply chains. You can follwer her at 21 Century Nomad, visit her website, and learn more about her research into Apple here.

[...] Suicide at Foxconn. Poisoned workers. Colluding to inflate the price of e-books. Tax evasion (albeit, legal). Shady suppliers who can’t toe the line of labor or environmental laws in China. Apple’s reputation has taken a hit in recent years, but it sales have continued to climb. How does Apple maintain its economic dominance in light of such powerful scandals? With an exceptionally strong brand that taps into our hopes and cultivates positive emotions. Read the full article at Sociological Images: Seeing is Believing. [...]

Not mentioned in your analysis:

They make a high quality product with a strong visual design focus. Which is to say they're pretty and they work well. They charge a premium price for these two elements which many are willing to pay. Additionally, they have a tight ecosystem around their products (The App store, Apple stores) which keeps the consumer close and increases repeat business.

While I will concede that branding may very well have contributed to their popular perception, I suspect that people just don't CARE enough about those externalities to influence their buying patterns.
--

With specific regard to issues with manufacturing in China, I don't think people hold Apple responsible for them. I think there is a public perception that China doesn't care about its people and that it's the country's fault for letting those things happen.

In the US, if we heard that a company was locking employees in, etc, there would be massive public outcry and law enforcement response. Americans don't understand why that doesn't happen in China . . . or that it's the result of corrupt politicians, etc. I see it as turn of the century US, waiting for the Triangle Shirtwaist fire to happen . . . except that may not help, since they censor their media so much.

the injustice it has done to the American public by skirting the majority of its corporate taxes.

That's not fair. As you mention at the top of the article, Apple's lack of tax payments are all LEGAL. So that isn't injustice, it is smart business. Wouldn't they be doing an injustice to their shareholders if they didn't seek to maximize profits in a legal way?

The blame lies with US tax law, and the politicians who wrote it. It isn't Apple's fault for taking advantage of the rules as they are written.

I feel the need to also point out that Apple's offshore suppliers also work with other companies as well. That's not to say that Apple couldn't influence them, but it may not be as easy as it sounds to change the way those suppliers run.

While I would disagree that Apple's success is based purely on branding, I agree with the implication that going after Apple's branding is the way to curb their bad behavior. "Brand trashing" is an up and coming form of resistance representing one of the few ways consumers have to level the playing field.

Nicely articulated indeed. I was wondering though, about other tech companies who may be less popular, but may feed off similar supply-chain systems. Off the top of my head, Dell, HP, Lenovo, Samsung, Sony. Would'nt your arguments be strengthened by examining how these companies treat their workers as well? Apple-bashing is fine with me, but I am curious about the remaining electronics giants.

Disclaimer: I own products made by all these companies.

[...] ones, and that the customer will experience positive emotions because of this. This trend, like playfulness, can be traced back to a commercial for the iMac and iMovie that aired in [...]

And once invested in several Apple products, the consumer is stuck (imprisoned?) by the inability to sync and use a new product from another company with his or her still working Apple products. A smart model for creating future customers is to trap the customers with the initial purchase/s. Consumers may not like it, but if the goal is profit, it is smart to do if it works; and if there isn't a consumer revolt in protest, which there will be if the products do not remain superior to competitors' products.

[...] a recent post on the Apple brand and its cultural significance, I drew on my study with Gabriela Hybel of over [...]

[...] dance. In my previous posts, I’ve focused on two important elements of Apple’s brand promise: whimsicality and  sentimentality. In this post I spotlight another key finding from our research: the [...]

Beyond the intial product purchase, there is also the idea of lock-in. Consumers must not only overcome their thoughts re: labor violations as compared to brand power but also the act of switching to another device. Companies know lock-in very well and the average Apple consumer haa already invested in itunes and other Apple products linked to their device so even though they may care about the labor supply chain, it's just not enough to overcome brand + lock-in. I'm one of them!

[...] I showed that the company accomplishes this with commercials that associate its products with playfulness, sentimentality, and cool youthfulness.  The most prominent theme, however, and I suspect the [...]

[...] dance. In my previous posts, I’ve focused on two important elements of Apple’s brand promise: whimsicality and sentimentality. In this post I spotlight another key finding from our research: the association [...]

[...] I showed that the company accomplishes this with commercials that associate its products with playfulness, sentimentality, and cool youthfulness. The most prominent theme, however, and I suspect the most [...]

[...] a recent post on the Apple brand and its cultural significance, I drew on my study with Gabriela Hybel of over [...]

[...] dance. In my previous posts, I’ve focused on two important elements of Apple’s brand promise: whimsicality and  sentimentality. In this post I spotlight another key finding from our research: the [...]