The Banal, Insidious Sexism of Smurfette

The Smurfs, originating as they did in mid-century Europe, exhibit the quaint sexism in which boys or men are generic people – with their unique qualities and abilities – while girls and women are primarily identified by their femininity. The sequel doesn’t upend the premise of Smurfette.

In the original graphic novels, Smurfette (or La Schtroumpfette in French) was the creation of the evil Gargamel, who made her to sow chaos among the all-male Smurf society. His recipe for femininity included coquetry, crocodile tears, lies, gluttony, pride, envy, sentimentality, and cunning.

In the Smurfs 2, there are a lot of Smurfs. And they all have names based on their unique qualities. According to the cast list, the male ones are Papa, Grouchy, Clumsy, Vanity, Narrator, Brainy, Handy, Gutsy, Hefty, Panicky, Farmer, Greedy, Party Planner, Jokey, Smooth, Baker, Passive-Aggressive, Clueless, Social, and Crazy. And the female one is Smurfette–because being female is enough for her. There is no boy Smurf whose identifying quality is his gender, of course, because that would seem hopelessly limited and boring as a character.

Here are the Smurf characters McDonald’s is using for their Happy Meals: 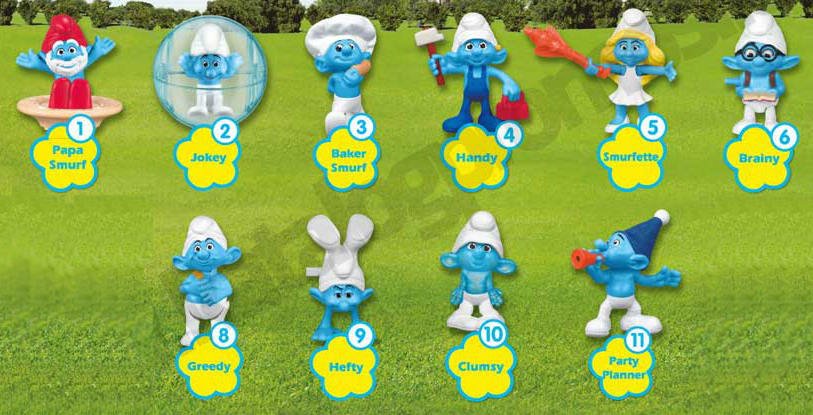 When you buy a Happy Meal at McDonald’s, the cashier asks if it’s for a boy or a girl. In my experience, which is admittedly limited to my daughters, girls get Smurfette. I guess boys get any of the others.

The Way It’s Never Been

Identifying male characters by their non-gender qualities and females by their femininity is just one part of the broader pattern of gender differentiation, or what you might call gendering.

There are two common misconceptions about gendering children. One is that it has always been this way – with boys and girls so different naturally that all products and parenting practices have always differentiated them. This is easily disproved in the history of clothing, which shows that American parents mostly dressed their boys and girls the same a century ago. In fact, boys and girls were often indistinguishable, as evident in this 1905 Ladies’ Home Journal contest in which readers were asked to guess the sex of the babies (no one got them all right):

The other common perception is that our culture is actually eliminating gender distinctions, as feminism tears down the natural differences that make gender work. In the anti-feminist dystopian mind, this amounts to feminizing boys and men. This perspective gained momentum during the three decades after 1960, when women entered previously male-dominated occupations in large numbers (a movement that has largely stalled).

However, despite some barrier-crossing, we do more to gender-differentiate now than we did during the heyday of the 1970s unisex fashion craze (the subject of Jo Paoletti’s forthcoming book, Sex and Unisex). On her Tumblr, Paoletti has a great collection of unisex advertising, such as this 1975 Garanimals clothing ad, which would be unthinkable for a major clothier today: 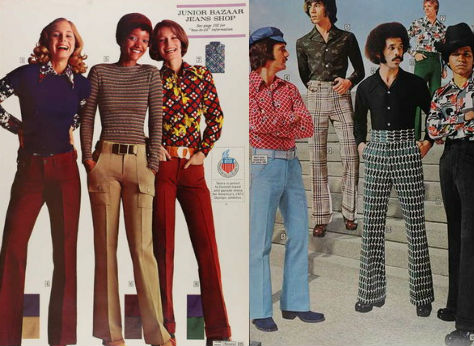 Today, a blockbuster children’s movie can invoke 50-year-old gender stereotypes with little fear of a powerful feminist backlash. In fact, even the words “sexism” and “sexist,” which rose to prominence in the 1970s and peaked in the 1990s, have once again become less common than, say, the word “bacon”: 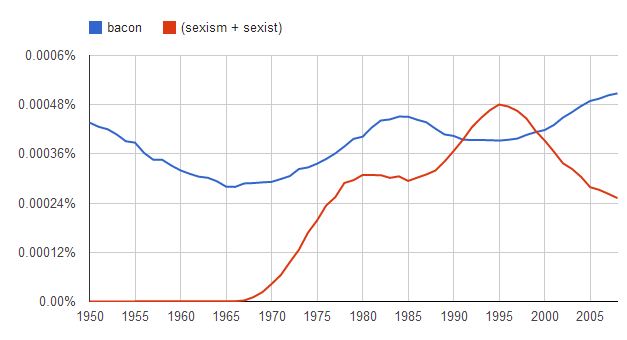 And the gender differentiation of childhood is perhaps stronger than it has ever been. Not all differences are bad, of course. But what Katha Pollitt called “the Smurfette principle” — in which “boys are the norm, girls the variation” — is not a difference between equals.

Cross-posted at The Atlantic and Family Inequality.

"the gender differentiation of childhood is perhaps stronger than it has ever been." Hence the pressing need for more analysis, skepticism, and critique of "gender identity" in children.

Now to be fair, the word bacon should be the most spoken word in the English language period.

I kid, I kid. It's a good article highlighting a serious problem and Smurfette is the namer of the "Smurfette Principle" for a reason.

When I was a kid in the 80's, I remember when the Smurfs figurines came about. Other kids at school started getting them. I was fascinated by them because of all the differnt ones there were, oogling the displays at the stores, wishing I could cllect them all. Naively, I assumed they were genderless--until they came up with the Smurfs cartoon and introduced Smurfette to American audiences, first as an evil dark-haired creation of the wizard character to mislead the good (now apparently all-male) Smurfs, that was then tranformed by the Smurf's wholesome goodness into a blonde "addition" to the Smurf village, with her principle and only role being an object of flirtation, sexual affirmation and desire for the other "real" Smurfs. As a dark-haired little girl, I was terribly unhappy about this, although I didn't understand all the things that upset me about it.

In the decades since there's been tons of criticism about the Smurfette thing, so it's beyond me why they could not do better in the films. Or why TV shows aimed at youths and young adults don't avoid the Smurfette principle, although far too many follow the same recipe. These producers of young people's entertainment really fear that kids won't be engaed by female characters, and so limit female charaters to the one, token, usually shallow and unengaging Smurfette trope. ut how are young people suppose to knwo that female characters can be engaging if all they see are bland variations on Smurfette?

[...] THE BANAL, INSIDIOUS SEXISM OF SMURFETTE from The Society Pages [...]

[...] Cohen over at The Society Pages has a good article out detailing why Smurfette is still problematic.  The basics: “The Smurfs, originating as they did in mid-century Europe, exhibit the quaint [...]

For me, the original Smurfs look genderless. But the corollary to the growing gendering is "gender everything" (including pens and cheese). Another corollary: there MUST be a specific female version (just one) of everything. How can girls follow role models that are (Gosh) genderless, even worse, behave like "boys" (do interesting stuff)?

"Boys are the norm, girls the variation-" interesting that the female sex should be the variation when statistics demonstrate that there are more females on the planet, thereby making the sex more common, or normal, than the slightly more anomalous male sex.

Please show a source for your sexism vs. bacon chart! Except for a brief peak in the 1990s, it seems like bacon is always more common than "sexism." As it should be...

[…] up, serious discussion of blatant sexism in western discourse..ie, the Smurfs. And can I just also add, why is it that people just roll their eyes or feel like we’re […]

Here's the truth though:
Men ARE "hopelessly limited and boring" if they are identified by just their gender.

A woman can walk into a social group and be instantly popular and interesting to everyone.
Ultimately, a woman gets the choice who she socialises with and eventually, who gets to become their mate.

Guys are dime-a-dozen and have to find a niche to fill in order to stand out. We don't get to choose.
We're lucky to be chosen.

Or is it that the writer of this article would prefer that women should also have to work hard to stand out and face the same cripplingly poor odds of rejection?