McDonald’s has distributed a pamphlet showing employees how to make a budget and stick to it.  As you can see, the pamphlet is a joint effort by McDonald’s, VISA, and (apparently said with a straight face), Wealth Watchers International.  The “key to your financial freedom,” they say, is keeping a budget journal. 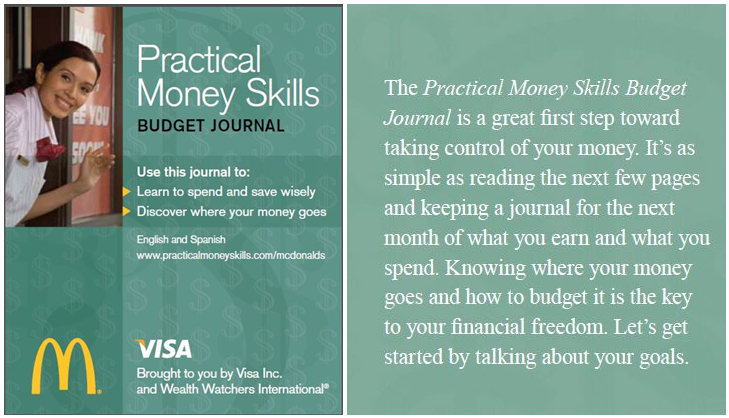 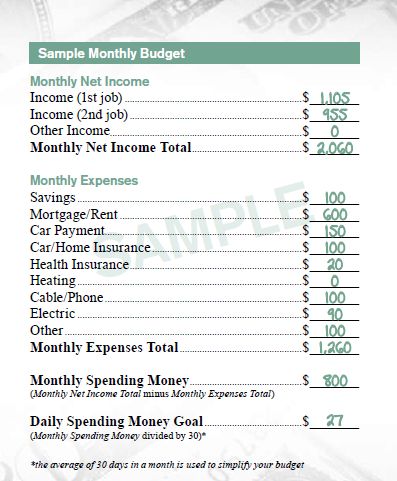 But do you notice anything missing?  Food, for example. Presumably, that comes out of the $27 a day in spending money.  Transportation costs? Car payments are included, but not gasoline or upkeep. On an income of $24,000 a year, will this family have a car that needs no maintenance?  And if the two earners have only one car, it’s likely someone will have to take public transportation to work.  Oh, wait  – maybe they both work at the same McDonald’s. And they never buy clothes.

I’m not sure how McDonald’s employees get health insurance for $20.  Or home heating for free.

I compared this budget with those found at the The Economic Policy Institute, which has a “Family Budget Calculator.”  You enter the location and the number of adults and children, and it shows the budget for “a secure yet modest living standard.”  Since McDonald’s used a 2-earner family, I imagined a family with two adults and one child.  Here’s what they would need in San Antonio. 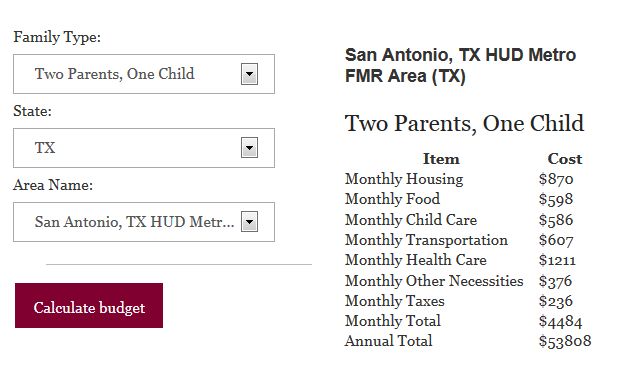 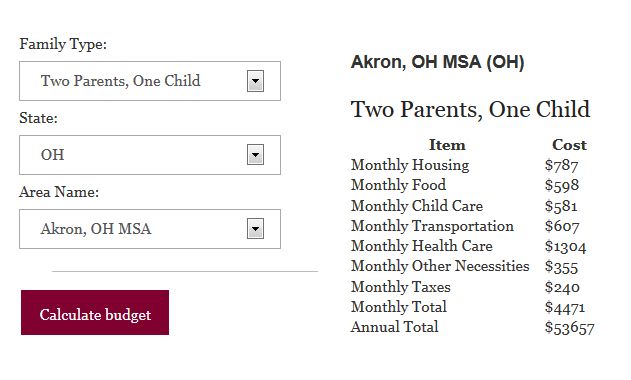 Both cities require a monthly income of $4400 for a modest living, more than double what McDonald’s envisions for its employees.  The big difference is health care – $1200 a month is a lot more than $20.  Then comes transportation ($600 vs. $0).  Then there’s the $580 for childcare, an item that is also absent from the McDonald’s budget.  (Apparently, workers at Golden Arches are part of that low-fertility problem that some observers in the Wall Street Journal worry about – here for example).

As for daily spending, food alone, at $600, more than wipes out what the McDonald’s budget suggests. Perhaps McDonald’s assumes that the family eats most of their meals on site, taking advantage of the 50% employee discount.

So much for the spending part of the McDonald’s budget.  What about the income part?  The Glass Door  posted these pay ranges for various positions. 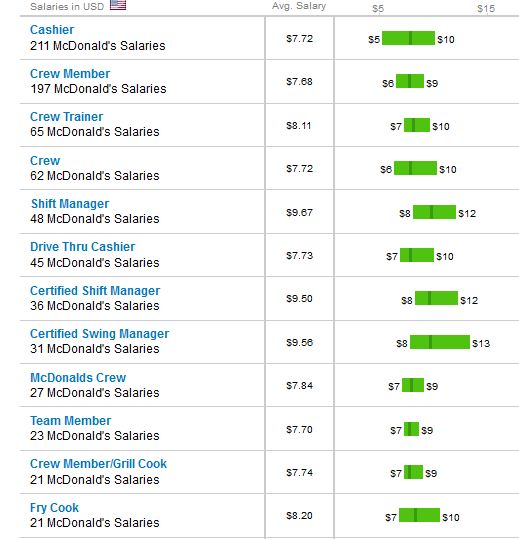 Workers might get as little as $6 or even $5 per hour.  The average seems closer to $7.  Fast food is not covered by federal minimum wage, but let’s use that $7.25 as a default estimate.  A forty-hour week, four weeks a month, comes in at $1160 – very close to the $1105 in the McDonald’s sample budget. So that side of the balance sheet is fairly realistic.

That annual income of just under $24,720 is above the official poverty line – $19,530 – but not by all that much.  Given the omissions in the expense column, I would think that a family would find it very hard to live on that little.  And I doubt they could sock away $100 in savings, no matter how much “journaling” they did.

You have a much more gracious (and expensive) way of looking at this budget than a lot of people. Most people I've seen who have looked at this journal have assumed McDonald's was assuming *their worker* would have another job.

>"Fast food is not covered by federal minimum wage"

Executive, administrative, professional and outside sales employees: (as defined in Department of Labor regulations) and who are paid on a salary basis are exempt from both the minimum wage and overtime provisions of the FLSA.

Looking at self-reported salary, some of which might be after-tax, reported by people covered differently under FLSA (such as students, or young people), or simply inaccurate, still puts the average above the $7.25 proposed as an estimate. ($7.70, to be precise, or over 5% more than $7.25)

The intention of a sample budget is to show how the math works; it's not intended to be an exhaustive case that applies to everyone.

The EPI's numbers seem a bit... pessimistic. I ran the numbers for my state, and according to them I was barely getting by on my starting salary as a Software Engineer... having lived on that salary, let me say that it does not *feel* anything close to barely getting by.

There should be a lot more outrage over this than there is.

What corporation has the gall to try to micromanage their employees' lives like this? And can't they pay them a higher minimum wage? That might be a start to help out their employees. What a waste of trees and time.

The budget assumes the person has a second job to go to. So, what if Mc D`s demands the person stay back for a couple of extra hours causing the person to be late? That happens a few times and the person loses that second job because Mc D`s gets in the habit of keeping them back one or two hours or if they refuse so they can get to their second job, Mc D`s fires them. Down to one job.
Also, the expenses they show are not even close to what the real living expenses are today.

The federal poverty level is not really a living wage in most places. It is based on old methodology - it doesn't take into account taxes or food stamps, or local cost of living (except in Hawaii and Alaska), and it is based on a flawed estimate of needs. In the 1960s, when it was formulated, the poor spent about a third of their income on food, so the poverty level is the cost of an emergency meal plan times three. Now, though, it is more like a seventh of a typical budget. We also have better data, so there is no reason to continue to use such a simplistic measure.

The wages McDonald's workers earn are undoubtedly low, and their sample budget clearly leaves out necessities. That said, it seems likely that their budget was intended to be applied to a single wage earner, which makes comparing it to the income needed by two adults & one child rather specious. Two McD's employees would earn $4120/mo, which is a lot closer to the dollar amounts determined by the EPI calculator. Still low, but just sayin' -- you should probably compare apples to apples.

Insulting. I can't believe their response to the outcry from fast food employees for a fair, living wage is to deliver us this offensive garbage. "Sorry we pay you abhorrently little to work on your feet in a greasy pit 40 hours a week. Maybe if you just knew how to write down numbers you can reach financial freedom! Just think, your Arches CEO makes $998 an hour - even when he sleeps, every year! Think about putting on a sweater instead of turning on your heat, and pretty soon you, too, might find "financial freedom".

Or as Karen Walker puts it: "Why, poor people are just so clever. I wonder why they can't figure out a way to make more money."

Least we forget, much like Wal-Mart, by McD's thwarting the good sense to pay workers well and lead the charge for a thriving middle class (that would substantial aide in rescuing America from our current economic woes), they essentially create a working poor; I am shocked this budget plan does not include instructions on how to apply for federal and state assistance! I mean, why should they pay someone to work when we can all subsidize their corporate greed?

Who came up with the headline: "...Delusional Blame-the-Victim..."? How about maintaining at least the pretense of objectivity? Seriously, it frames this as nothing more than an opinion piece for which readers should rightly view any facts with suspicion. The readers of this blog are thoughtful, intelligent human beings who may actually be capable of and wanting to supply their own conclusions based on facts and clear-eyed analyses. Who knows, the conclusions could even be the same without such heavy handed steering.

Restaurants notoriously do not allow for 40-hour work weeks, but schedule employees 35 or less hours per week in order to avoid paying benefits full-time employees receive. In other words, few food service workers are "full-time" employees on paper.

Checked out the “Family Budget Calculator.” I don't know where the site gets its numbers, but where I live, the cost of housing is way too low on its budget. Sure, if we want to live in a slum!

Wow, I noticed a lot of the things listed in the article on my own on first looking at that budget and relating it to my own situation.

here's a few others -
*$27 a day for everything else; okay, that's covering food, clothing, incidental medical expenses not covered by insurance ($10 for a bottle of ibuprofen for your aching feet!), spending on children and/or pets, transportation costs ($10 for 1/3 tank of gas every week or so), entertainment (us poors just switch off when we're not working, don't you know that? but he/she is apparently working 2 jobs at 80 hours a week, so so much for entertainment), cleaning supplies, household supplies ($8 for toilet paper), any money owed on taxes (yearly, yes, but it can be a burden), and any other emergencies that might come up! Wheee! Livin' large!

*0 dollars for heating? (What about A/C?) Where is this person living that they're not paying anything for heat/cooling?

*$600 for rent - which will get you bupkis, maybe a studio apartment, more likely a room in a shared house, and all the potential problems of a shared living environment.

*$150 for a car payment? HAW HAW HAW, maybe with PERFECT credit, unlikely for a person on the low end of the economic scale. Car payments would likely be twice that.

*Electric $90 a month? What, does this person have nothing more than a cell phone and a lamp? Hopefully also not living where the electric company inflates its rates (Duke Electric, I'm looking at you)

*I also notice that there's no allocation for day care, so I guess this person can't have children either; our culture makes a big stink about "neglect" but never thinks about how much day care costs and how unaffordable it can be.