A single event can take on great symbolic importance and change people’s perceptions of reality, especially when the media devote nearly constant attention to that event.  The big media story of the killing of Trayvon Martin and the trial of George Zimmerman probably does not change the objective economic, social, and political circumstances of Blacks and Whites in the U.S.  But it changed people’s perceptions of race relations.

A recent NBC/WSJ poll shows that between November of 2011 and July 2013, both Whites and Blacks became more pessimistic about race relations. 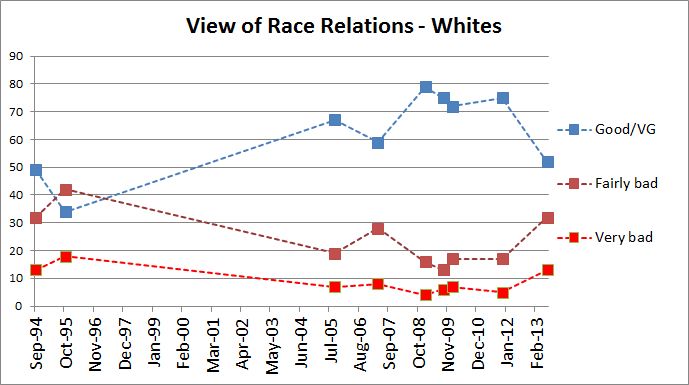 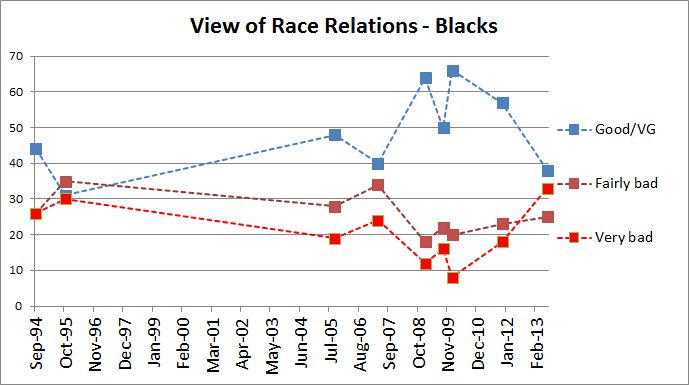 Since 1994, Americans had become increasingly sanguine about race relations.  The Obama victory in 2008 gave an added boost to that trend.  In the month of Obama’s first inauguration, nearly two-thirds of Blacks and four-fifths of Whites saw race relations as Good or Very Good (here’s the original data). But now, at least for the moment, the percentages in the most recent poll are very close to what they were nearly 20 years ago.

The change was predictable, given the obsessive media coverage of the case and the dominant reactions to it.  On one side, the story was that White people were shooting innocent Black people and getting away with it.  The opposing story was that even harmless looking Blacks might unleash potentially fatal assaults on Whites who are merely trying to protect their communities.  In both versions, members of one race are out to kill members of the other — not a happy picture of relations between the races.

My guess is that Zimmerman/Martin effect will have a short life, perhaps more so for Whites than Blacks. In a few months, some will ascend from the depths of pessimism. Consider that after the verdict in Florida there were no major riots, no burning of neighborhoods to leave permanent scars — just rallies that were for the most part peaceful outcries of anger and anguish.  I also, however, doubt that we will see the optimism of 2009 for a long while, especially if the employment remains at its current dismal levels.

Personally, I take the fact that the protests were largely peaceful as a huge sign of improved race relations. Peaceful protest implies a much higher degree of trust that the protesters have a voice in the system.

I think the titling etc. could have been better for this... it's about the perception of race relations, not the thing itself. It's not like white privilege suddenly soared from point 0 after this trial, or black men were arrested more than white men, killed more than them by officers, whatever. All this was already happening for a long time. But suddenly people couldn't just push it under the rug with a Morgan Freeman quote.

Why is this being framed as whites vs. blacks? My guess is it because it fits the narrative you want to tell.

George Zimmerman is 50% Hispanic, 50% white. But the media focuses on his white heritage to stir up racial white vs. black controversy.

Compare that to Barack Obama, who is 50% black, 50% white. Here, the media focuses on his black heritage to forge a more compelling story: the first black president.

In each case, the race labels are chosen to fit a narrative and stir up emotions.

I don't know about the effect of the acquittal but I'd say that the media's response and grandstanding by those who love to hear themselves talk (on both sides) certainly hasn't helped.

The question really isn't, "did Zimmerman's acquittal hurt race relations?" First, that is a loaded question. A neutral question would have been better.

Since only the tiniest fraction of the public has any direct knowledge of the subject, all opinions were gained through selective release of information passed on by journalists and bloggers, all of whom came to the party loaded down by their own preconceived notions of race relations, fairness and justice. The question really is, were race relations hurt by the media coverage (from both sides of the white/black social justice divide) of the Martin/Zimmerman trial and its eventual outcome? It relates to the bigger question we must always ask about the media: Is it reporting or creating the news?

In this game we have no need to share with any person for the gaming because its a online game and free spades we can get more player in online so please try if you want.

I am very proud to say that highspeedisps.com is a platform where you can find the best internet services.