The Failure of Racial Profiling

Jay Livingston at Montclair SocioBlog discussed the two figures below (full report here).  The first shows that Black and Hispanic drivers are more likely to be stopped by Los Angeles Police than White drivers.  The second shows that, when stopped, if searched, police are more likely to find weapons and drugs on Whites than on either Blacks or Hispanics.  Conclusion: Blacks and Hispanics are being racially profiled by the L.A.P.D. and racial profiling does not work.  Data from New York City in 2008 tells a similar story. 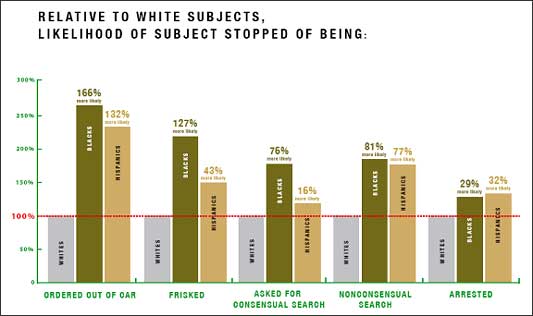 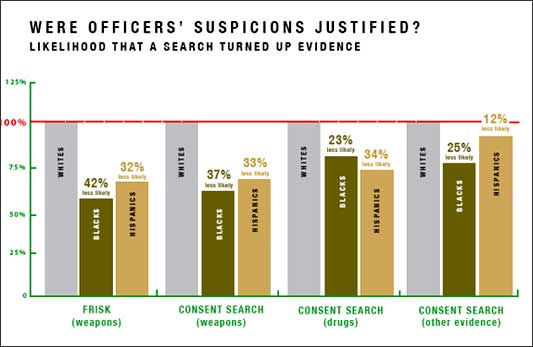 Originally posted in 2011. Re-posted in solidarity with the African American community; regardless of the truth of the Martin/Zimmerman confrontation, it’s hard not to interpret the finding of not-guilty as anything but a continuance of the criminal justice system’s failure to ensure justice for young Black men.

Now I haven't looked at these graphs for a very long time, so I may be missing something here, but I think the second graph can be interpreted in a different way. Is it possible that because Whites are much less likely to be pulled over, when they are pulled over they are of a heightened suspiciousness to the police (compared to the threshold set to pull over a minority), and are therefore more likely to be caught with drugs than when minorities are pulled over?

Obviously I'm not saying that racial profiling isn't happening (it clearly is), but I'm not sure that the "suspicions being justified" graph is the best way to consider the data. Because the police are being choosier when it comes to pulling over Whites, it should be no surprise that they are correct a higher percentage of the time. Perhaps, and I don't actually believe this is true, if the same threshold was set for pulling over all people, regardless of race, minorities would then have a higher percentage of being caught with weapons or drugs. Again, personally I don't believe this is true, but the way the data is presented does not exclude this possibility.

And perhaps the "full report" gives this data, but I'd also be interested in knowing the absolute numbers associated with this data.

I agree with the statement that the graphs do not indicate an absolute error in police methodology, and would say I think the skew in the data is almost definitely for the reason given.

Racial profiling is done for a reason. Statistics have shown the police that minorities are more likely to have reasons to pull them over.

Were these statistics acquired during the extended period of equality between all races America had? The unbiased conviction ratios between different races we had during this mythical time?

There is simply no way to get accurate figures about this sort of thing, without stopping and (thoroughly) searching a ridiculous amount of people in an unbiased area in a way which was intentionally unbiased. Should be easy.

Personally, I think the resources spent on studies like this would be better spent researching possible connections between the war on drugs and 'organized' crime. It was pretty obvious during prohibition.

[...] more on crime and imprisonment, see this post on the ineffectiveness of racial profiling, this table on the percentage of children with parents [...]

are you my edward?

It may be three years old, but I want to give kudos to the designer of those graphs.  No (or rather, looking at the 75% and 25% markers on the lower one, very little) fudging of axes; clear demarcation of the standard of comparison; numbers both absolute and relative...and all without crowding things.

Re: Another Explanation
I had the very same thought regarding the "choosiness" of the police when pulling over white drivers, therefore, having their suspicions justified more often. I suspect that the numbers would be similar for all drivers, regardless of race, were they pulled over for "real" reasons, and not simply profiled.

Were I a crime boss of some sort, I would conclude that the best way to continue committing crimes would be to find a bunch of white employees to ferry weapons, drugs, and other illegal contraband from place to place on my behalf. They're less likely to be stopped, searched, and all that jazz, so naturally I would want to employ as many white criminal errand-runners as possible. I could even throw in a few minions of another race as bait for the police to pick up so they would leave the other gophers alone, like in that one movie about drug runners. My point is that racial profiling is probably more helpful to criminals than harmful. When things skew so ridiculously, it's easier for the bad guys to slip through the cracks.

So USA continues to say that hispanic is a race huh?

The Failure of Racial Profiling;How Much is Too Little Salt?; and More « Welcome to the Doctor's Office — December 1, 2011

[...] Racial profiling still continues today. Though blacks and whites use drugs at similar rates, Black and Latino males are three times more likely than white males to have their cars stopped and searched for drugs – even though white males are four-and-a-half times more likely to actually have drugs on them when they are stopped. Researchers also recently found that when police officers are presented photos of black and white men holding either a gun or a non-threatening object in a video game style setting, police are more likely to hesitate at shooting armed white men. Racial discrimination in jury selection also remains widespread as well as racial bias in presidential pardons and racial bias in the effects of a criminal record on one’s ability to be hired. [...]

revision: Conclusion: whites are the thugs more than blacks and latinos, if you wanna generalize a group.

I may be crazy but doesn't the fact that they had 100% success rate imply they should be pulling over more white people? If they have that high a success rate they are obviously missing a lot of arrests. They can't be 100% accurate so regardless of the actual numbers involved there are a lot of white people getting away with these crimes and a lot of minorities getting hassled for no reason.