In analysis of Presidential pardons during the George W. Bush administration, ProPublica has found that whites were four times as likely as non-whites to be granted a pardon.  Pardons were granted to 12% of whites, 10% of Hispanics and Asians, and zero percent of Blacks and Native Americans. The disparity remained even when investigators controlled for type of crime. 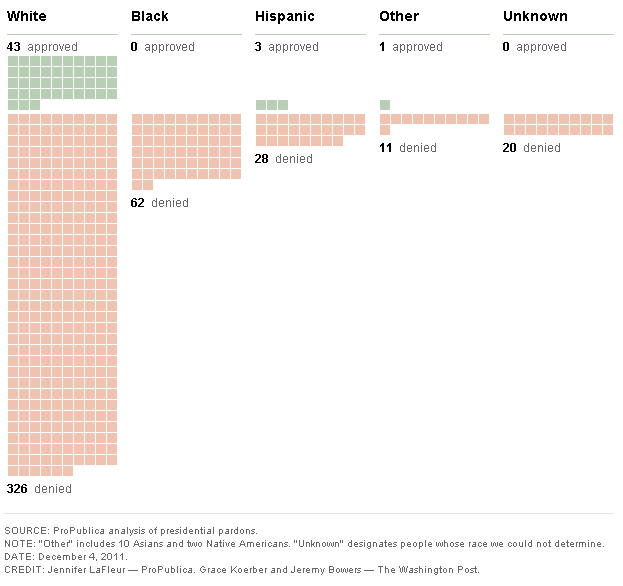 …President George W. Bush decided at the beginning of his first term to rely almost entirely on the recommendations made by career lawyers in the Office of the Pardon Attorney.

The office was given wide latitude to apply subjective standards, including judgments about the “attitude” and the marital and financial stability of applicants…

Bush followed the recommendations of the pardons office in nearly every case… President Obama — who has pardoned 22 people, two of them minorities — has continued the practice of relying on the pardons office.

An African American woman from Little Rock, fined $3,000 for underreporting her income in 1989, was denied a pardon; a white woman from the same city who faked multiple tax returns to collect more than $25,000 in refunds got one. A black, first-time drug offender — a Vietnam veteran who got probation in South Carolina for possessing 1.1 grams of crack – was turned down. A white, fourth-time drug offender who did prison time for selling 1,050 grams of methamphetamine was pardoned.

ProPublica traces the disparity to age, leniency given to people who are seen as “upstanding” members of society (e.g., they’re married, have little debt), the influence of money and politics (letters from Congresspersons and donations to lawmakers by convicts’ spouses), and simple prejudice.  Nevertheless:

When the effects of those factors and others were controlled using statistical methods, however, race emerged as one of the strongest predictors of a pardon.

Originally posted in 2012. Re-posted in solidarity with the African American community; regardless of the truth of the Martin/Zimmerman confrontation, it’s hard not to interpret the finding of not-guilty as anything but a continuance of the criminal justice system’s failure to ensure justice for young Black men.

Bias in Presidential Pardons; States That Believe in Recovery (and Don’t); Plus More « Welcome to the Doctor's Office — February 7, 2012

What would be interesting is to see how the rates change under different presidents. However, I wasn't able to find data for other presidents. Anyone have any links to valid data from previous presidencies?

There should be no Presidential pardons for criminals, unless it can be demonstrated that they were wrongly convicted.

Wonder how this looks if you separate it by campaign contributions...

Were those 62 all of the people who attempted to get a presidential pardon? If so, then the amount of people asking for a pardon should also be taken into account.

Yes I understand the percentage of pardons is lower for non-whites, but perhaps there weren't enough non-white people asking for pardons to get a  good sample.

Also, it could be that the types of crimes committed by each group isn't the same.

I don't mean to say that this is all that's going on. The stories told there show possible bias and I think that this should be given more importance than the number of pardons, in this case.

Perhaps organize the data based on what types of crimes were committed, what crimes were pardoned, etc.

George W. Bush pardoned John Forte, so that's at least one black person, isn't it? Is it possible that others were missed in this survey? Probably statistically insignificant, but still...

[...] armed white men. Racial discrimination in jury selection also remains widespread as well as racial bias in presidential pardons and racial bias in the effects of a criminal record on one’s ability to be [...]

[...] frisked in New York City and elsewhere around the country. We also know that White prisoners are four times as likely as people of color to be granted Presidential pardons. Troy Davis’ death is a recent, heartbreaking reminder of [...]

[...] persons to be pardoned? Even when the crime is something as innocuous as under-reporting income? Sociological Images has that in nice graphic form, if you can’t visualize the disparity.This world. Posted by: Phire on May 1, 2012 | [...]

Something good Obama has done and he should do more of it - US Message Board - Political Discussion Forum — December 19, 2013