The Fat Joke: Power and the Meaning of Words

If this PostSecret confession doesn’t break your heart, you are a bad person. 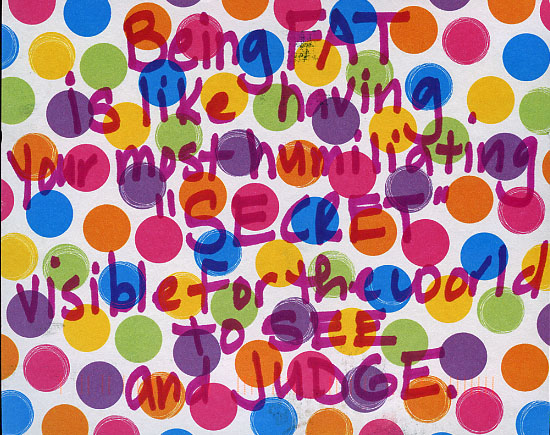 Last week I chatted with the Canadian Broadcasting Company for a segment they’re doing on humor and power.  I used hateful jokes about fat people as an example of how patterns in comedy reveal our biases: who it is okay to revile, whose feelings we can dismiss, who we see as less-than-human.

I was surprised when the host said that some argue that pointing out people’s weight isn’t offensive because it’s “just a fact.”  I responded, “Sociologists don’t believe in that kind of fact.”  Two hundreds years ago being called fat would have been a compliment: it represented power, success, wealth, and (yes) health.  Today the meaning of fat has changed.  The word is now a weapon.  For the person who wrote this secret, fatness is not a fact; it’s a “humiliat[ion].”  This is what dehumanization feels like.

Whoever you are, I wish I could give your warm, comfy body a big giant hug.

I don't disagree. The word "fat" has definitely taken on pejorative connotations, something we are socialized to understand in all kinds of communications apart from fat jokes. cf. "Do I look fat?" "No, you look great!"

But the word really should just be a description of a fact, as the CBC would have it, and I think the ideal endgame would be to have the word somehow de-stigmatized. (e.g. "Do I look fat?" wouldn't even be a question; and if it was, "Yes, AND you look great!" could be the answer.)

I know this isn't the culturally normal response, but shame is a state of mind, ok deeply programmed by stupid people, often our parents. If you yourself connect some physical defect with not being good enough then of course other people can see that vulnerability and hurt you. If you stop doing that then you're fireproof. It takes a bit of work but it's worth it. And so are you, as it were.

Being fat is a physical attribute, and one that people can use to make inferences about other people's behaviors.

If you carry excess fat on your body, you are consuming more calories than your body needs to function at its present level of activity. Fat cells around your stomach don't create themselves, they can only form when there are excess energy molecules to utilize. Right or wrong, good or bad, carrying fat means you are consuming more calories than you need.

Of course, we know people's bodies are different. People expend energy and metabolize food at varying levels of efficiency... two different people can eat the same meal and perform the same exercise, but one person's body might convert more of the meal to fat while expending less energy to complete the exercise. There's no "right amount" for any one person to eat/exercise.

There is, however, a "right amount" for each individual person to keep his own weight steady. An overweight/underweight person is consuming too much/too little for to keep their own body in balance.

Again, I'm not saying people's choices are necessarily right or wrong (I, for one, oppose things like large soda bans in NYC). But in the same way humanity judges other "vices" like greed, your can expect food greed (or gluttony) to invoke the same judgement.

If it were just a 'fact' then it wouldn't be the basis of jokes. Jokes are about 'meanings' not facts.

This is so interesting to me. I can totally relate to this. I am a stripper. I'm conventionally attractive in every way except.... I have large labia minora. Not that its necessarily "ugly" but it's just not what some people think of when they imagine an attractive vulva. I feel like it's my humiliating secret and I feel embarrassed about it when I work even though I know I'm normal and healthy. I can't imagine what it must be like to have that feeling about my entire body. My type of vulva is ridiculed and made fun of. When guys like it, it's almost considered a fetish. In this way, I relate to fat women. My heart and admiration goes out to them. Thanks for this post.

As a Canadian, and someone who was bullied to the point where my bullies made a short film with a humiliating caricature of me in it for laughs (which they then showed to the entire class), I kind of want to see this segment. Do you know what it's called and/or when it might be coming out?