Relax, “Breadwinner Moms” Do Not Portend a Coming Matriarchy

The other day when the Pew report on mothers who are breadwinners came out, I complained about calling wives “breadwinners” if they earn $1 more than their husbands:

A wife who earns $1 more than her husband for one year is not the “breadwinner” of the family. That’s not what made “traditional” men the breadwinners of their families — that image is of a long-term pattern in which the husband/father earns all or almost all of the money, which implies a more entrenched economic domination.

To elaborate a little, there are two issues here. One is empirical: today’s female breadwinners are much less economically dominant than the classical male breadwinner — and even than the contemporary male breadwinner, as I will show. And second, conceptually breadwinner not a majority-share concept determined by a fixed percentage of income, but an ideologically specific construction of family provision.

Let’s go back to the Pew data setup: heterogamously married couples with children under age 18 in the year 2011 (from Census data provided by IPUMS). In 23% of those couples the wife’s personal income is greater than her husband’s — that’s the big news, since it’s an increase from 4% half a century ago. This, to the Pew authors and media everywhere, makes her the “primary breadwinner,” or, in shortened form (as in their title), “breadwinner moms.” (That’s completely reasonable with single mothers, by the way; I’m just working on the married-couple side of the issue — just a short chasm away.)

The 50%+1 standard conceals that these male “breadwinners” are winning a greater share of the bread than are their female counterparts. Specifically, the average father-earning-more-than-his-wife earns 81% of the couple’s income; the average mother-earning-more-than-her-husband earns 69% of the couple’s income. Here is the distribution in more detail: 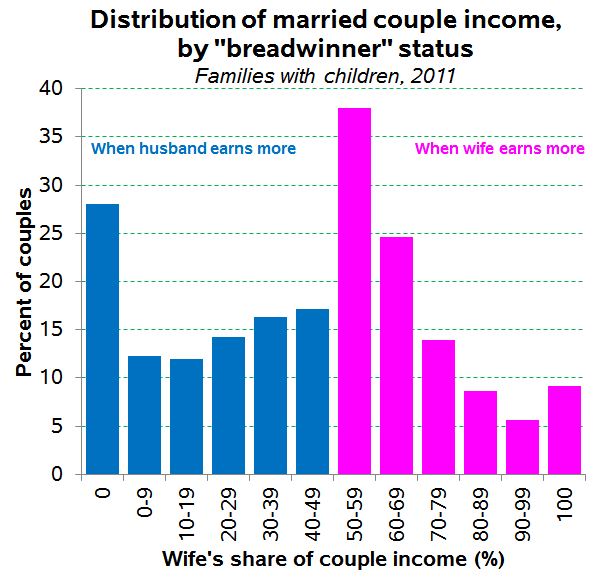 Collapsing data into categories is essential for understanding the world. But putting these two groups into the same category and speaking as if they are equal is misleading.

This is especially problematic, I think, because of the historical connotation of the term breadwinner. The term dates back to 1821, says the Oxford English Dictionary. That’s from the heyday of America’s separate spheres ideology, which elevated to reverential status the woman-home/man-work ideal. Breadwinners in that Industrial Revolution era were not defined by earning 1% more than their wives. They earned all of the money, ideally (meaning, if their earnings were sufficient) but, just as importantly, they were the only one permanently working for pay outside the home. (JSTOR has references going back to the 1860s which confirm this usage.)

Modifying “breadwinner” with “primary” is better than not, but that subtlety has been completely lost in the media coverage. Consider these headlines from a Google news search just now:

Further down there are some references to “primary breadwinners,” but that’s rare.

Maybe we should call those 100%ers breadwinners, and call the ones closer to 50% breadsharers.

This just in: When looking at headlines to news stories "subtlety has been completely lost", even though "further down [in the story] there are some references" to the subtlety

More on this startling new development at 11

As long as they consider men who make 51% "breadwinners", I don't see the problem. Yes, there's a nuance lost in a summary -- there is certainly something more you can learn by looking deeper -- but I don't think the difference is enough to make the summary misleading.

When married mothers are primary (50+1) earners, about a fifth of them earn 80% or more of family income. When married fathers are primary earners, about half of them earn more than 80% of family income. (Some tweaks to the graph would make the comparison more clear.)
If the data aren't too thin, it would be interesting to see in terms of family life cycle, e.g., by age children: families with no children, families with preschoolers, with older children and "empty nest" families. It's hardly news that women's earnings traectories tend to be suppressed by motherhood in ways that men's earnings are not.
I also wonder about the level of income/wealth/SES across these married couple families. Are families with married mothers as dominant earners (80%+) just as well-off as families with married fathers as dominant earners?

It's ironic that back then when bread was made at home, the ones who actually kneaded the flour and baked the loaves (so they were the actual breadmakers) were the women of the family and/or the female servants, not the men.

How do those averages work out when you only consider two-income families? I'm guessing that the 29% of women-who-make-less who don't make anything skew everything pretty heavily.

That's a good point, I like "breadsharer." I also think you have to take benefits into account. My husband and I make around the same income, but I'm self-employed and we have benefits through his work, so his job is more valuable to the family.