The Pew Research Global Attitudes Project recently released data on attitudes about homosexuality in 39 countries. Generally, those living in the Middle East and Africa were the least accepting, while those in the Americas, Europe, and parts of Asia (the Philippines, Australia, and to a lesser extent Japan) were most accepting:

Generally, the more religious a country, the less accepting its citizens are of homosexuality:

The proportion of people who support social acceptance of gays and lesbians ranged from a high of 88% in Spain to a low of 1% in Nigeria:

Attitudes about homosexuality vary widely by age. There is a pretty consistent global pattern of more positive attitudes among younger people, with a few exceptions:

Thus far, legalization of same-sex marriage has been largely confined to the Americas and Europe; New Zealand and South Africa are the two outliers: 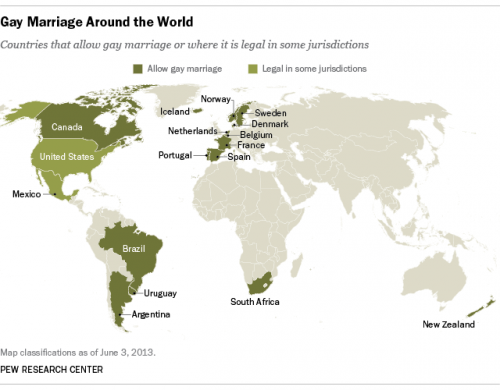 The Pew Center points out that of the 15 nations that have fully extended marriage rights to same-sex couples, 8 have done so just since 2010. In the U.S., we’re currently awaiting a Supreme Court’s decision, which should arrive shortly, to know if we’ll be joining the list sooner rather than later.

Thanks to Peter Nardi at Pitzer College for the link!

Hmm, I wonder about the wording and binarity really. “Shouldn’t support” actually contains both “no marriage, but no criminalization” and “prison sentence”. While both indicate not-acceptance it’s different kinds of not acceptance.

Interesting about European countries in general ranking so high as compared to the US. I've been to both Germany and England, and have a lot of German friends, and in my experience (despite American stereotypes that European machismo is "gay") men from these countries are much more likely to be openly homophobic. Driving down the street screaming slurs, seeming horrified beyond reason if anyone suggests that they are gay, and openly expressing distaste for being around gay men. But they seem equally as horrified at the idea that gay people shouldn't have equal rights, while a lot of Americans will fight tooth and nail to make sure gay people don't get rights, but do it in a sugary sweet way and would be horrified at the idea of using gay as an insult or saying homophobic slurs.

Very proud of being spanish and have been invited to a few gay marriages. I must say it has cost a lot to our society, specially on very religious areas, although I think there is an acceptation of homosexuality, and we are still working on it, trying to not loose equal rights versus the more conservative sectors.

[...] Global Attitudes toward Homosexuality — Generally, the more religious a country, the less accepting its citizens are of homosexuality: Ah, the magical link between bigotry and faith. [...]

[...] At Sociological Images, a new Pew Research map shows Canada is among the countries with the highest acceptance of homosexuality. [...]

These maps skew towards anti-homosexuality because they use the same color for "no data" and "less acceptable."

[...] course, marriage equality does not yet exist in thirty-seven of the fifty United States, but with young people around the world overwhelmingly increasingly showing their support, it is coming. Thank goodness, in the best sense of the [...]

The "should homosexuality be accepted" one is very vague. It's hard to tell whether they're talking about their opposition to gay marriage or their belief that gay sex itself should be illegal.