Teen pregnancy, like obesity, is often framed as an “epidemic.”  As such, both the “epidemic” of teen pregnancy and the “epidemic” of obesity can be understood through the lens of what sociologist Stanley Cohen popularized as a “moral panic.” In Cohen’s words, moral panics are “condensed political struggles to control the means of cultural reproduction”; additionally “successful moral panics owe their appeal to their ability to find points of resonance with wider anxieties.”

“The Real Cost of Teen Pregnancy” — a public health information campaign launched by the Mayor and Human Resources Administration of New York City in March 2013 — features babies and toddlers, primarily children of color, chastising their teenage mothers. Launched at a time when teen pregnancies have actually declined, primarily due to the availability of safe and affordable reproductive health care, the accusatory “shame and blame” narrative of these images is not only out of proportion to the “problem” it seeks to address, but is weighed down by its obvious cultural narratives about teens of color, poverty, gender and sexuality. 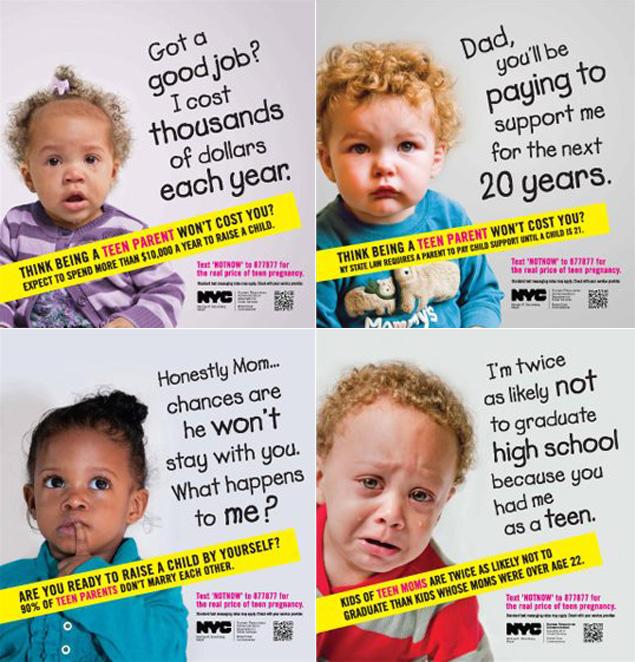 Having a pensive toddler of color next to the slogan “Honestly Mom… chances are he won’t stay with you. What happens to me?” and a weeping boy of color next to the words “I’m twice as likely not to graduate high school because you had me as a teen,” serves to re-stigmatize single teen mothers, encouraging wider social senses of moral outrage, hostility and volatility toward young, predominantly impoverished girls of color. Not unlike cultural narratives about “welfare queens,” the campaign plays into racist and classist fears about sexually active girls of color and teenage mothers who use social services. The message just under the surface here is about the need for social control of “unruly bodies.”

These 4,000 posters, put up in buses and subways, cost a reported $10,000 per year for the city, and have already drawn harsh critique from many. Haydee Morales, vice president for education and training at Planned Parenthood of New York City, for instance, has reportedly suggested the campaign has got it backward. In her words, “It’s not teen pregnancies that cause poverty, but poverty that causes teen pregnancy.”

According to Samantha Levine, a spokesperson for New York’s Mayor Bloomberg, “it’s well past the time when anyone can afford to be value neutral when it comes to teen pregnancy.” Public health campaigns are never value neutral. They communicate social beliefs about normalcy, productivity, desirability, and cultural worth.

An additional cost of the unexamined acceptance of this new teen pregnancy campaign is accepting yet another narrative about individual choice over systemic change. Placing responsibility on the shoulders of the individual, such campaigns silence more complex conversations about accessible and affordable reproductive health care, anti-poverty campaigns, and gender and social justice work. Instead of buying into the “moral panic” of teen pregnancy, perhaps the mayor’s office might look into more long lasting and less stigmatizing possibilities of structural change to improve the lives of young women in New York City.

“Shame and blame” has rarely gotten public health anywhere. In the words of researcher and speaker Brené Brown, “Shame diminishes our capacity for empathy. Shame corrodes the very part of us that believes we are capable of change.”

Sayantani DasGupta is a faculty member in Narrative Medicine at Columbia University. She is the editor of Stories of Illness and Healing: Women Write their Bodies,  co-authored The Demon Slayers and Other Stories: Bengali Folktales, and authored Her Own Medicine: A Woman’s Journey from Student to Doctor.

I'm curious how this plays into the apparent assumption that racism, sexism, white privilege, and other forms of bigotry can be dealt with primarily through shame...

But regarding the specific images... the analysis seems to be making different assumptions than I would about the target audience. These seem to me to be much more of a warning than a shaming... it's not trying to change the behavior of teen mothers, it's trying to change the behavior of potential teen mothers. The goal is not to influence people through shame or guilt, but through the avoidance of being shamed. Therefore the concerns about enforced powerlessness would not apply to its effectiveness with its target demographic.

The goal and mechanism seems very similar to the surgeon general's warning on a pack of cigarettes.

That said, the criticisms are *entirely* valid for its potential negative effects on people who are already teen mothers, and are already likely going through a difficult time.

Both of the articles linked seem to assume that social shaming is not an effective strategy, regardless of whether it has negative side effects. Do you have links to the research supporting this view?

Comparing this to the obesity epidemic was a poor choice. Obesity is one of the foremost, if not THE health epidemic for many developed countries, with severe repercussions for public health. It is so much more than a moral panic-induced, socially constructed "epidemic" (italicized, seriously?). The Foucauldian framework used here always provides meaningful insights, but scope of the obesity epidemic reaches way beyond that.

What is the point to all this anti-social behavior and campaigns such as this wretched little piece of misogynistic racism? Perhaps, it's that nobody wants to be in last place while the global economy is doing everything in its power to lower their overhead by displacing workers and exploiting the ones with jobs to the fullest, while privatizing profit and socializing loss with, among other things, enormous environmental destruction. And most don't want to displease the boss, lest they be the next redundancy. Whites can be their own Uncle Toms, just as long as they get to kick someone beneath them. The fear of becoming "white trash" is powerful, because poor whites know not too deep down that they are already being treated like "niggers" by their superiors. And the Southern memory knows that very poor, ignorant, and hyper-religious whites were particularly despised by the slaves.

I could not agree more. I was a teen mother when I had my first child. When I first saw these ads, I felt compelled to write about them on my blog:

Are the condoms at Walgreens too expensive? Actually, I was just watching this Lisa Ling documentary about swingers, and apparently they sell condoms at the Dollar Store.

Seriously folks, there are a number of ways to get no/low cost birth control. And if for some strange reason there aren't, or you are too afraid/embarrassed/immature to do what is necessary to obtain it--there is always abstinence, which last time I checked is 100% effective. If a person doesn't have the courage to go to the drugstore and purchase condoms and/or spermicide, perhaps that should be a sign to them that they are not emotionally ready for the myriad of consequences that can result from having sex.

While poverty is a contributing factor to teen pregnancy and birth, having a child before the age of 22 significantly lessens your chances of finishing college, even accounting for social class:

The posters are stating facts. How can anyone make informed decisions while the truth is sugar-coated and hidden? My sister became a teen mom. She now lives in poverty and has little chance of escaping it as a direct result. All through her pregnancy, I was the only one who told her this would happen, everyone else lied that everything would be OK and just magically sort itself out. Yes, people should know that children are extremely expensive. They should know that having a baby will not secure a relationship. And people should know what kind of life they are probably going to be giving their kids. I fear for a world in which telling people the truth is "shaming." What else should we deliberately avoid educating people about?

Public Service for Whom? Teen Pregnancy on Television and Beyond Lauren Weinzimmer / University of Texas – Austin | Flow — July 1, 2013

[...] In March 2013, New York City launched “The Real Cost of Teen Pregnancy” public health campaign (select advertisements pictured above). These advertisements were designed to play upon the moral panic surrounding teen pregnancy, but also to victimize and further stigmatize this already targeted population. For more about the campaign and how it plays into moral panic and the understanding of teen pregnancy as an “epidemic,” see the article here. [...]

[...] ethnic groups, public health and privately funded campaigns are popping up across the U.S. aimed at chastising, shaming, and blaming teenage [...]

[...] groups, public health and privately funded campaigns are popping up across the U.S. aimed at chastising, shaming, and blaming teenage [...]

[...] the size of the problem, or just make parenting sound like a terrible thing (see for instance this and this). Do you agree or disagree with these arguments? Explain your [...]

[…] 20 years ago.  And public health campaign about the cost of the “epidemic of teen pregnancy” may do more harm than good. What about the hook-up culture? To learn more about teenage sexual behavior in general, check out […]