Cross-posted at Inequality by (Interior) Design.

A Brazilian modeling agency, Star Models, recently released a new series of anti-anorexia PSA advertisements. They illustrate one of the ways ultra-thin body ideals characterizing women’s bodies in the fashion industry today are institutionalized, or made part of the way we “do” fashion. Fashion sketches — the way that people communicate designs to one another — idealize these bodies, with their exaggerated proportions, long slender limbs, and expressionless faces. The PSAs place real women alongside the sketches, graphically altered to similar proportions, in order to problematize the ideal. 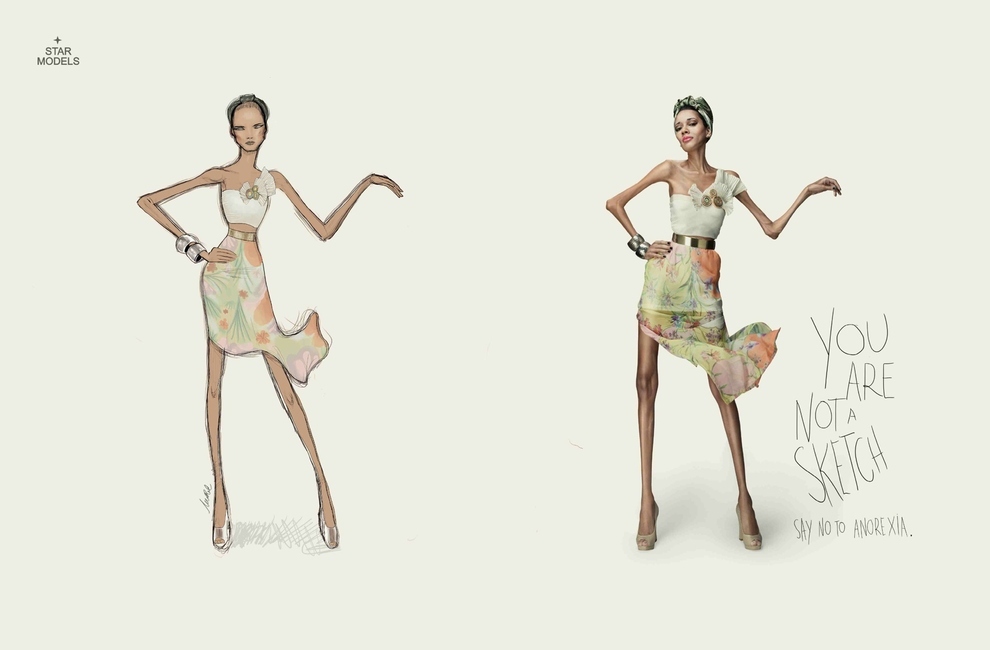 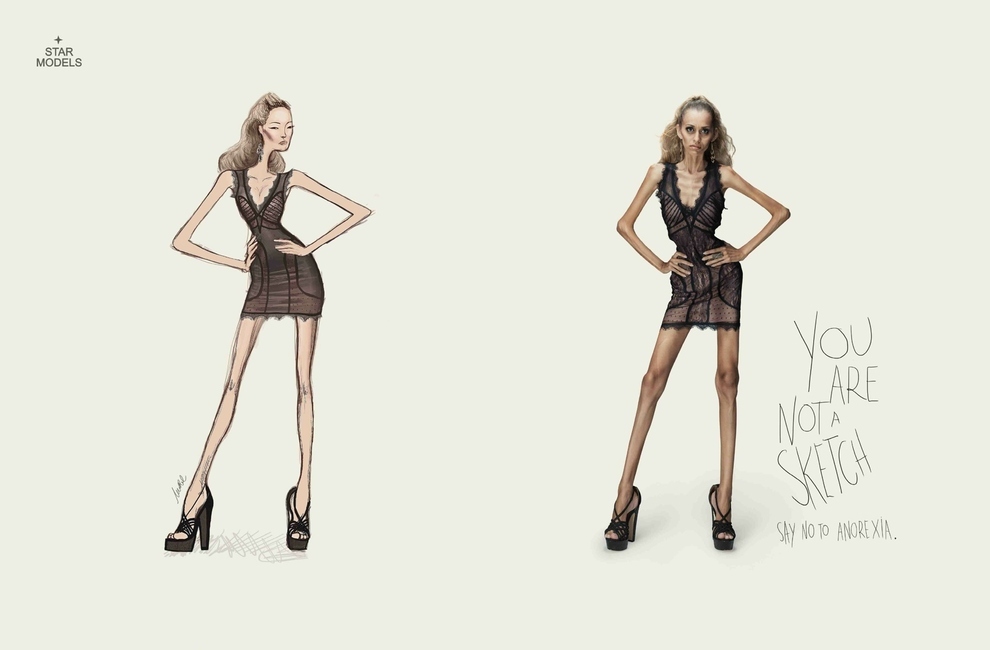 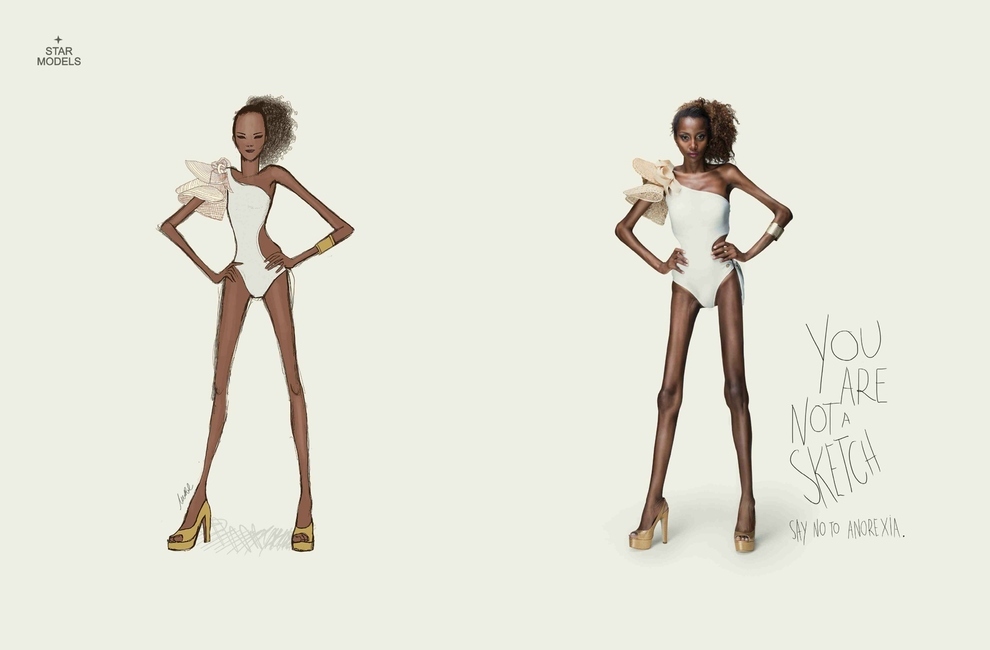 Sociology professors are constantly asking students to analyze what they might be taking for granted. One issue we take for granted is that the images on the left are what “fashion” looks like and ought to look like. That they are culturally recognizable as fashion sketches speaks to the ways in which hyper-thin feminine bodies are institutionalized at a fundamental level in the fashion industry today.

The Dove Evolution video — as a part of their “Campaign for Real Beauty” — vividly illustrates the work that goes into the production of advertisements. Using a time-lapse video depicting the diverse labor that goes into the production of an ad was a simple illustration of the impossibility of contemporary beauty ideals. Viewers are left thinking, “Of course we can’t look like that. She doesn’t even look like that.”

Star Models’ anti-anorexia ads promote a similar message, but also call our attention to the more dangerous aspects of adherence to industry ideals. Similar to depictions of what Barbie might look like as a real woman, altered images of dangerously thin models aside these sketches have a very different feel from the sketches they imitate.

What is being done about it?

In 2007, the Council of Fashion Designers of America (CFDA) passed a Health Initiative in recognition of an increasingly global concern with the unhealthily thin bodies of models and whether/how to promote change in the industry. The CFDA is working to better educate those inside the industry to identify individuals at risk, to require models with eating disorders to seek help and acquire professional approval to continue working, to develop workshops promoting dialog on these issues, and more.

The CFDA’s Health Initiative, however, treats eating disorders as an individual rather than social problem. This allows the CFDA to obscure the role it might play in perpetuating cultural desires for the very bodies it purports to “help” with the Health Initiative.

Susan Bordo famously wrote about anorexia as what she termed “the crystallization of culture.” We like to draw firm boundaries between normality and pathology. But Bordo suggests that anorexia is more profitably analyzed as culturally normative than as abnormal. Similarly, Star Models’ PSAs play a role in framing the fashion industry as (at least partially) responsible for ultra-thin feminine body ideals. Yet, they arguably fall short of providing institutional-level solutions as the tagline — ”You are not a sketch. Say no to anorexia.” — concentrates on individuals.

The CFDA’s focus on health initiatives and support for individuals suffering from anorexia, bulimia and other eating disorders are critical aspects of recognizing issues that seem to plague the fashion industry. While this surely helps some individual women, the initiatives simultaneously avoid the cultural pressures (in which the fashion industry arguably plays a critical role) that work to systematically conflate feminine beauty with ultra-thin ideals. Similar to problems associated with focusing attention only on the survivors of sexual assaults (failing to recognize the ways that sexual violence is both institutionalized and embedded in our culture), these images simply illustrate that individual-level solutions are unlikely to produce change precisely because they fail to locate “the problem” and ignore the diverse social institutions and ideals that assist in its reproduction.

Thanks to a student in my Sociology of Gender course, Sandra Little, for bringing this campaign to my attention.

Tristan Bridges is a sociologist of gender and sexuality at the College at Brockport (SUNY).  Dr. Bridges blogs about some of this research and more at Inequality by (Interior) Design.  You can follow him on twitter @tristanbphd.

The fashion drawings of women have noses now, anyway.

I saw a woman once who looked as anorexic as the models on the right. It was stunning in a bad way. It was unreal--- I kept blinking because I could hardly believe what I was seeing. How was she not in a hospital?

Really interesting piece, thankyou. I agree that the treatment of eating disorders needs to acknowledge the cultural causes more rather than treating them as individual issues.
However, I think this also means that the ways EDs are represented as only (or primarily) to do with extreme thinness is also problematic, as it means that non-thin people with EDs are deligitimised, and that the cure for disorders (particularly anorexia) is simply gaining an appropriate amount of weight. This ignores how EDs are a mental health issue as well as a physical health issue.

One issue we take for granted is that the images on the left are what
“fashion” looks like and ought to look like. That they are culturally
recognizable as fashion sketches speaks to the ways in which hyper-thin
feminine bodies are institutionalized at a fundamental level in the
fashion industry today.

There are books about how to draw fashion plates and that's the usual style taught at fashion school, yes.

(The first link is a tutorial that begins by tracing a fashion model from a magazine, then it says "On a piece of sketch paper, redraw your fashion model freehand, but lengthen the torso, arms, and legs." You can't beat that.)

Whenever people talk about Dove's "real beauty" campaign, I can imagine Don Draper and Pete Cambell sitting around in a office trying to figure out how they're going to convince women that Dove really cares about them and wanted them to accept themselves for who they are. Dove is the same brand that came up with a deodorant for women with ugly armpits and Dove's parent company sells skin bleaching products in other countries. I realize that the message is positive and that it might be making a difference in the lives of some people, but I really have a hard time with the idea of giving Dove or Unilever any props for that. And I know that's cynical, but I hate the idea of accepting yourself becoming as commodified as hating yourself.

Because Anorexia nervosa is, first and foremost, a psychological disorder, the expression "Say no to Anorexia" is about as insightful and helpful as "Say no to Depression" or "Say no to Obsessive Compulsive Disorder" (both of which are, incidentally, heavily associated with anorexia). Propaganda that frames mental illness as a choice may well do those suffering from it more harm than good.

And for the same reason, I think it's both wrong and dangerous to frame anorexia - or any other mental illness - as a "social problem," no matter how powerful it is as a symbol to a crass ideologue like Susan Bordo. That's not to say that there isn't a social problem; clearly, we have entities like the fashion industry providing dubious rewards for leaving a dangerous condition untreated, and a cultural landscape that normalizes eating disorders, both pouring fuel onto the fire.

Still, most people living with anorexia nervosa are not aspirant fashion models. And for said models, the rewards can be so substantial that many non-anorexics find themselves exhibiting behaviors associated with anorexia.
Rather than constructing a mental-health issue as an ideological battleground - a tactic doomed to failure - I would suggest distinguishing the illness (anorexia) from the behavior at issue (primarily, self-starvation). Self-starvation is a behavior that can be chosen or culturally rejected; anorexia is a private condition that is best treated at an intimate level with the cooperation of one's therapist and supportive loved ones.

Sociologists are not therapists for a reason.

I was dubious that fashion sketches were really so unrealistic, then I did a google search and found this. The misogyny of this image is amazing (trigger warning)

This is actually something I've been wondering about, because targeting social structures rather then individuals is a problem in every single social justice campaign. How *DO* you target social structures? Any examples of it being done well?

[...] “One issue we take for granted is that the images on the left are what ‘fashion’ looks like and ought to look like. That they are culturally recognizable as fashion sketches speaks to the ways in which hyper-thin feminine bodies are institutionalized at a fundamental level in the fashion industry toda....” [...]

[...] –An abbreviated version of this post is cross-posted at Sociological Images [...]