The magic of demographic knowledge is a memorable moment in John Sayles’s 1984 movie “Brother From Another Planet.” On the A train, a young man shows an elaborate card trick to the title alien, who looks like an African American but seems to have no understanding of the trick. So the magician offers another.

From 59th St. to 125th St. is one stop on the express.  But as the movie shows, that short ride covers a large demographic change, and it’s not just racial.  The New Yorker has posted interactive graphics showing the median income of the census tracts surrounding subway stations. 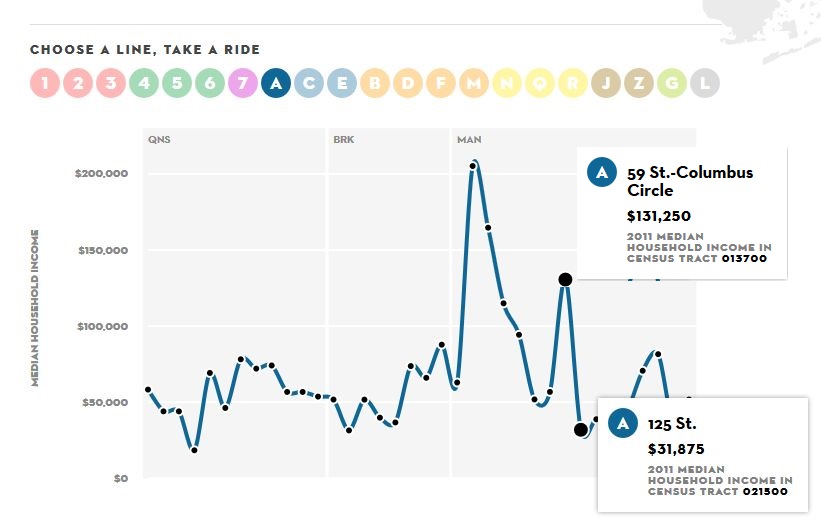 Take the A train one stop — from the southern border of Central Park to a few blocks above its northern border — and see median income drop by $100,000.

Many other lines travel the extremes of economic inequality.  My line is the 2: 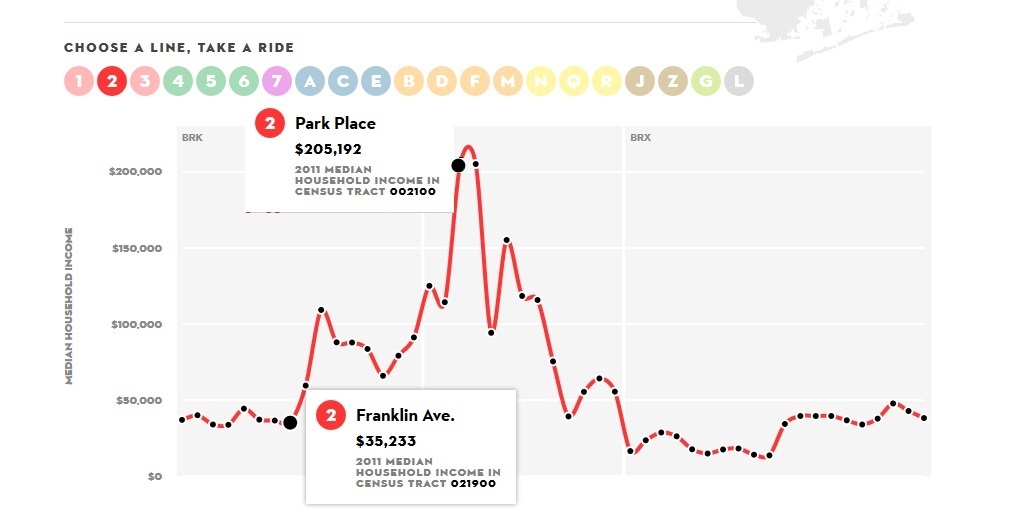 In the early morning commute, I see blue collar workers in their hoodies or rough jackets and steel-toe boots next to well-dressed people reading The Wall Street Journal.  They didn’t get on at the same stop.  The people who live in and work in the Wall Street census tract, which includes Park Place, are not on the train.  Here’s what their housing looks like: 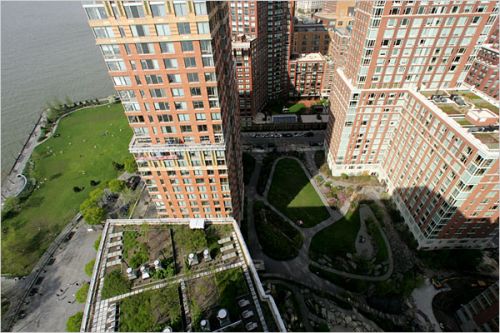 And here is Franklin St., Brooklyn: 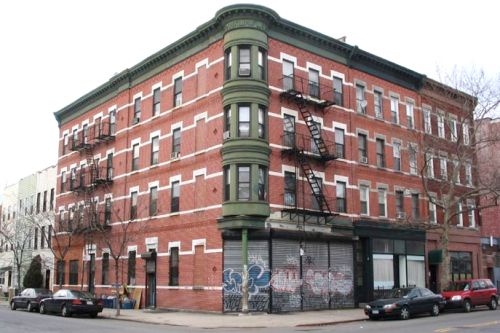 The subway demographic trick is not limited to New York. Here’s a time-lapse video of the Red Line of Chicago’s CTA.

Despite the social class segregation in housing, in cities like New York and Chicago, people of vastly different economic circumstances are likely to share the same subway car, at least for a few stops.  Yet I don’t get a sense of strong resentment or even envy among the have-nots (though I wish I had systematic data on this).  This is similar to the findings of Rachel Sherman, who studied how workers at high-end hotels thought of their guests.

New York and Chicago, however, are also where the rich are more likely to be liberal and in favor of redistributionist policies.  As Andrew Gelman has shown, the wealthy in rich states are far more liberal than the wealthy in poor states.  That may be partly because in rich states, the wealthy live in the large cities.  It would be interesting to see if we saw the same effect if we looked at Upstate New York, Downstate Illinois, or Massachusetts outside Rte. 128.

HT: Jenn Lena for the link.

gee, sharp changes in income or social class in a city...thats a novel observation.

You got moss growing on your moss.

You get a C+; good graphics, but poor examples and no library work - I'm sure a few seconds will turn up a lot of classic essays (streets for people, a primer for americans, B Rudovsky) [ya, it counts even if it ain't on the web]

at least 15 years ago, you could go from extreme poverty to extreme wealth simply by walking from one end to the other, north south, of Mt sinai med center in NYC ?

Was just thinking about that movie the other day. For some reason, I hadn't thought to look for it on youtube, but there it is. Thanks. I'll watch it tonight.

you can't really make any assessments of people based on where they get on or off the train. i think that is partially why there isn't really class conflict on the trains so much (or at least i don't see it). i mean, someone getting on at park place doesn't necessarily live there. and the same goes for franklin ave. people use the train to get everywhere, they might have just been hanging out at central park and they live in tremont.

these graphics are interesting though. that the chambers street stop on the A is so high is amazing. higher than 14th street! (my train is the A, so, y'know.)

Great movie. It was on Hulu recently. The magician character is actually that great actor Fisher Stevens. He was so young there.

In the early morning commute, I see blue collar workers in their hoodies
or rough jackets and steel-toe boots next to well-dressed people
reading The Wall Street Journal. They didn’t get on at the same stop.

Really? Someone has to clean the office bathrooms and staff the bistro kitchens.

This just in; different groups live in different parts of cities. More news at 11.

OK I apologize if this seems petty, but since the images matter here: that pic is on Franklin STREET and is absolutely, 100 percent definitely in Greenpoint and nowhere near the 2. You wanted the other Franklin (AVENUE) in Brooklyn; that particular station is down on the NE side of Prospect Park. Sorry, it was making me twitchy.

I used to take the A train from 59th to 125 every day after school and it FASCINATED me how one express stop could bridge two seemingly completely different worlds, in a socioeconomic sense. Because I wanted to get a seat for the long ride, I would always single out someone who looked wealthy enough to be getting off at 59th street after work and stand by them, because I just knew they would be getting off at that stop. The city can seem so egalitarian sometimes, especially on the subway, and these sort of things are a reminder of the often hard-to-see but very stark economic differences between city dwellers.