Forty years ago Richard Easterlin proposed the paradox that people in wealthier countries were no happier than those in less wealthy countries.  Subsequent research on money and happiness brought modifications and variations, notably that within a single country, while for the poor, more money meant fewer problems, for the wealthier people — those with enough or a bit more — enough is enough.  Increasing your income from $100,000 to $200,000 isn’t going to make you happier.

It was nice to hear researchers singing the same lyrics we’ll soon be hearing in commencement speeches and that you hear in Sunday sermons and pop songs (“the best things in life are free”; “mo’ money mo’ problems”).  But this moral has a sour-grapes taste; it’s a comforting fable we non-wealthy tell ourselves all the while suspecting that it probably isn’t true.

A recent Brookings paper by Betsey Stevenson and Justin Wolfers adds to that suspicion.  Looking at comparisons among countries and within countries, they find that when it comes to happiness, you can never be too rich. 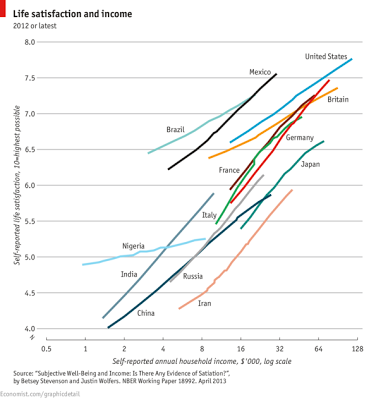 Stevenson and Wolfers also find no “satiation point,” some amount where happiness levels off despite increases in income.  They provide US data from a 2007 Gallup survey: 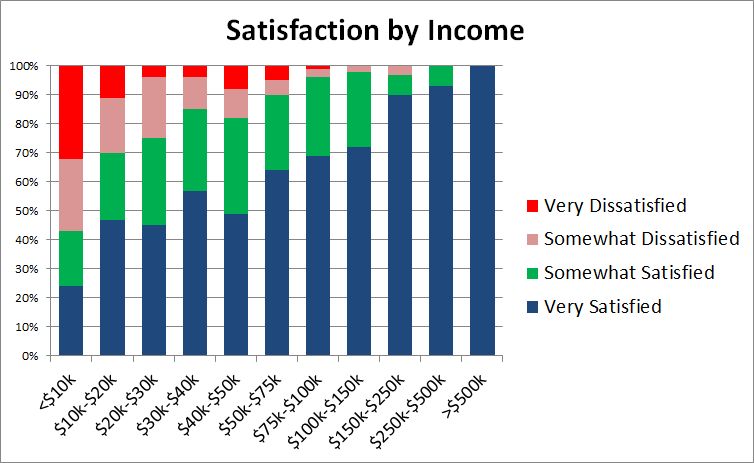 The data are pretty convincing.  Even as you go from rich to very rich, the proportion of “very satisfied” keeps increasing.  (Sample size in the stratosphere might be a problem: only 8 individuals reported annual incomes over $500,000;100% of them, though, were “very happy.”)

Did Biggie and Alexis get it wrong?

Around the time that the Stevenson-Wolfers study was getting attention in the world beyond Brookings, I was having lunch with a friend who sometimes chats with higher ups at places like hedge funds and Goldman Sachs.  He hears wheeler dealers complaining about their bonuses. “I only got ten bucks.”  Stevenson and Wolfers would predict that this guy’s happiness would be off the charts given the extra $10 million.  But he does not sound like a happy master of the universe.

I think that the difference is more than just the clash of anecdotal and systematic evidence.  It’s about defining and measuring happiness.  The Stevenson-Wolfers paper uses measures of “life satisfaction.”  Some surveys ask people to place themselves on a ladder according to “how you feel about your life.”  Others ask

All things considered, how satisfied are you with your life as a whole these days?

The GSS uses happy instead of satisfied, but the effect is the same:

When people hear these questions, they may think about their lives in a broader context and compare themselves to a wider segment of humanity.  I imagine that Goldman trader griping about his “ten bucks” was probably thinking of the guy down the hall who got twelve.  But when the survey researcher asks him where he is on that ladder, he may take a more global view and recognize that he has little cause for complaint.  Yet moment to moment during the day, he may look anything but happy.  There’s a difference between “affect” (the preponderance of momentary emotions) and overall life satisfaction.

Measuring affect is much more difficult — one method requires that people log in several times a day to report how they’re feeling at that moment — but the correlation with income is weaker.

In any case, it’s nice to know that the rich are benefitting from getting richer.  We can stop worrying about their being sad even in their wealthy pleasure and turn our attention elsewhere.  We got 99 problems, but the rich ain’t one.

Money might not bring happiness, But that doesn't mean it fails to bring power.

Drug addicts may say that they feel "happy" when they score, but most people wouldn't call it that; and everyone knows that they have to keep scoring, no matter what, so that this state being called "happy" has no real lasting value. People who can't have enough are mentally, spiritually, and emotionally disturbed.

Money cannot buy happiness, but lacking money for the things you need and the things that bring you joy will prevent you from being happy. Call it "mentally, spiritually, and emotionally disturbed," but see how dissatisfaction shrivels up once you hit what is generally considered a living wage? Money may not buy happiness, but money buys food and shelter and clothing and security (though only indirectly). I am happy when I am warm, I am unhappy when I am cold and it's raining someplace I can't escape and the wind is blowing on me. I am happy when I read; the fact that I can buy books, magazines, and an internet connection causes me to be happier than if my only options were staring at the wall or watching TV. I am happy when I am on a boat. I cannot afford a boat, but if I had 500,000 dollars, I could, and I would routinely be able to do something that I know makes me happy. People mistake this attitude for physical books or boats themselves making me happy, but people's hobbies make them happy. If I could somehow have the experience of reading a book or riding on a boat without actually physically obtaining those things, I would enjoy the experience enough to pay for it.

Many studies show that life satisfaction as compared to income increases as income increases, but levels off at a certain point- I've seen figures between 60K and 75K and will assume they've done the study multiple times to consider inflation. Point is, at that income, assuming you live within your means, in most places, you have enough to feed, clothe, and comfortably shelter your family, take care of necessary bills, have access to medical care, and then have some extra for savings, vacations, and luxuries. But you're also not wealthy enough that people are always harassing you for money and you have pressure to live a certain lifestyle or care for multiple vehicles or pieces of property. Of course this depends on location and family size, but the point is pretty clear.

The top figure is a classical case of lying with graphs. Notice that the x-axis (income) is logarithmic. If you plot a logarithm function on a graph like this, it will show as a straight line, as in this case. This means that while the graph seems to suggest a linear relationship between income and happiness, there are in fact diminishing returns. If you make $100,000, an extra $1,000 will make less of a difference to you than if you make $30,000. This is, as far as I know, quite consistent with earlier work.

I seriously doubt that money beyond a certain baseline brings more happiness; however, I have little doubt that happiness enhances ones ability to be "successful." Money doesn't equal success but it--even in the old communist Soviet Union--was correlated with success. So maybe the only saying while true is backwards....Happiness can "buy" money.

To paraphrase a hard-to-attribute quote, "I've been rich and I've been poor. Rich is better."

But "better" doesn't necessarily have anything to do with happiness, of course. We can be very rich and suicidally depressed simultaneously, but it's still better than being poor and suicidally depressed as having some money greatly increases the chances we can get proper help for whatever problem we happen to be dealing with (e.g., visiting a psychiatrist instead of buying a fifth of whiskey). This all seems pretty self-evident, though.

I guess everyone here has always had money. But the saying more money, more problems is true. I have taken a job overseas and the increase in money has made me WWWAaaayyyyyy happier. But, then the problems start, such as greedy baba mamas. But then again they are always the problem......untill my wedding date.

[…] Separation from non-celebrities caused Michael Jackson to feel alone and somewhat socially awkward. He even described how he felt by stating “I feel strange around everyday people” (Jackson interview) in an interview with ABC news in 1979. Never really making any true friends led Michael to follow the path of pursuing the only thing he knew. Fame. Later in the interview he even described his approach on when he was going to slow down by saying “don’t stop till you get enough” (Jackson interview). His approach to seeking happiness was altered by his lust for fame that he need to keep fueling or by his “perpetual need to keep their fame machine churning” (Rockwell 1). No matter how he did this, from undergoing cosmetic surgery or coming out with a new hit song, his “fame machine” always had plenty of fuel. Obviously Michael Jackson was making mounds of money which is yet another reason why his unhappiness was brought through fame. Studies even show that the higher the income the less satisfied one is with his/her life as shown in this chart. https://thesocietypages.org/socimages/2013/05/23/money-doesnt-bring-happiness-a-reconsideration-with… […]