Brave’s Merida Gets a Disney Make-Over

In 2006, The Walt Disney Company bought the computer-animated feature film powerhouse Pixar.  This makes the lead of their most recent movie, Brave (2012), not just a princess, but a Disney Princess.  Merida is having a royal coronation at the Magic Kingdom this morning.

For her coronation, the princess has gotten a good ol’ Disney makeover. On the left is the new Merida (“after”) and on the right is the old Merida (“before”).  Notice any differences? 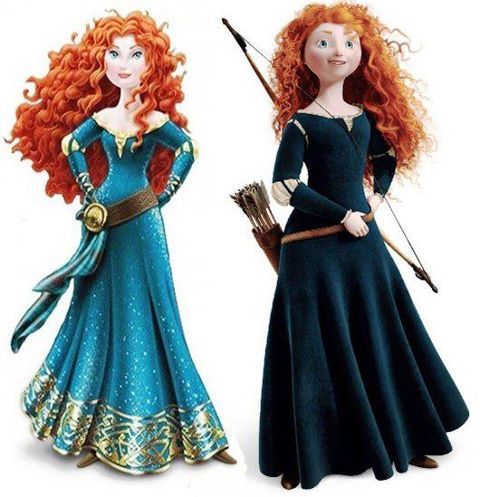 Here are the ones that I see:

I hate Disney, as a rule. But when my 2 year old daughter fell in love with Merida (she calls her Humba), I thought that this particular Disney near-princess was the most positive role model Disney had to offer my smart, independent, sassy little girl. Thanks for taking that away, Disney.

I wonder about the message sent by a character who always practices open carry, even in situations where being visibly armed is counter indicated.

I'd have to review the Pixar canon to see if she was on a character arc away toward normalcy.

She still has her weapons in a number of the promo shots. The article linked points out that there are many style guides for each princess, depending what you're putting her image on, so that's probably her "gussied-up formal affair" look as opposed to her "everyday" look, seen here: http://www.insidethemagic.net/wp-content/uploads/2013/04/princess-550x386.png

This is why I don't - and never have - intentionally exposed my girls (I have 4 daughters) to the Disney princesses. I haven't shown them the films and don't read them the books/buy any of the guff associated with them. I'm sick of female 'role models' being watered down until they're anything but. There are plenty of better female characters out there for my girls to admire.

Just wondering, what are everyone's thoughts on Tiana? Role model, or not?

UGH dislike. I loved that movie.

Don't you think the sexualization of popular toys and characters is something that's a gender-neutral problem? You focus on feminization, but I tend to see a similar hyper-sexualization of "boys" toys, too. Look at how superheroes have changed since their incarnation in the late 1930s. Superman, Batman, and others were once drawn with realistic male physiques, but they've become more like misshapen male Barbie dolls. If there's any issue with this shift in gender depictions, it isn't an issue that's limited only to female representations.

Petition against this, over 50k signatures when I signed.

Narrower feet and more gold bling. The facial expression is no longer open, but arch

The "before" Merida was sooo great. They just made her look like every other Disney princess. Yuck. This makes me so sad. :(

Also shows how fine the differences can be and still make an impact. Aside from the dress, you really have to look closer to see what they changed,but you still notice that she isn't the same anymore.

I've seen this complaint about Merida's 2D representation in the princess franchise doing the rounds on facebook - and I am very troubled by it - the backlash, that is, not Merida's appearance. The fact is that Merida hasn't been sexualised - as far as I can see she's just been drawn with the young adult body - breasts, hips and all - that befits her age in the movie (late teens, as far as I remember). Young kids look up to older role models, and what sort of message is it sending young girls - and boys - if they never see a kick-ass female heroine with an adult body? How is that supposed to make girls feel when they start coming into curves of their own? Merida's looking healthy and happy, and there's nothing intrinsically sexualising, diminishing, degrading about her curves: that's just what young adult heroes look like, if they happen to be female.

All true, but I think you missed an important one: the smile.

The "Princess" Merida has a smile that says: "I am pretty. Also possibly on Valium."

The individual changes to the princesses aren't what bothers me here. It's that the princesses, who were all drawn in different type periods, using different techniques, in different styles, by different people, were re-made to look very much the same. It's silly to call this a sexing up, because all of the Disney princesses were originally drawn to look fairly sexy. Merida the least so, sure, but she's still very much supposed to be attractive and appealing. Hell, the attitude of the "Disney Renaissance" was essentially "how much navel, leg, or cleavage can we show on our heroine without getting a PG rating?" But now, they're all robbed of what makes the princesses as characters unique and interesting, both physically and personality wise. I always got the impression the Disney Princess franchise was based on that: we can appeal to every girl because we have a fairly diverse cast, who are all presented as equally as worthwhile (as long as you're white, or Jasmine). Now, they look a lot more like the fashion dolls that are sold in the Disney store, which likely all look the same because they use the same or similar molds to cut down on cost, than they do like the characters that appear on the screen.

It should be noted that:

a) Disney has done this before with Aurora and Cinderella, who originally had appearances very unique to the time period in which they were animated, and had different color hair. Their images were changed in the 90s to fit the smoother, more cartoony, more simply colored style of 90s characters like Belle. I guess the standard of "what 6 year old girls are assumed to be easily distracted by" in 2013 is sparkles, sparkles, and more sparkles, as opposed to simple colors.

b) Merida and Rapunzel are by definition going to look way more different in merchandise because they're rendered in a different animation type than their movies were. Personally, I think both of them look absolutely terrible done in the 90s style traditional 2-D animation style, "updates" or not, in a way the likes of Tiana and Belle never will, because it's such a deviation from how they're presented in the movie. If Uncanny Valley can apply to something that's already an artificial representation representation of a human, the Rapunzel and Merida makeovers are it.

I hardly think the girl child nowadays, if left to herself, will choose the Disney Princesses as more than what they are- the overt dream expressions of sexually threatened or starved white, male, Americans perverts! Why any parent should think that it is a doll for her child to play with is beyond me! Merida, as she was looked intelligent; now they have gone and turned her too into a dumb, white blond!

Get over it...everyone blowing this out of proportion is forgetting one thing: IT'S A FUCKING FICTIONAL CHARACTER....get off your high-horse you left-wing idiots...

It's an entire idealization of her appearance. In addition to those changes listed in the article, I noticed a complete change in body ratios. Her hips are higher, making her legs longer, obviously her waist is smaller and her bust is larger. The top hemline has been lowered and the decoration at the center has been extended downward to provide further emphasis to her breasts. Her face has been changed from round to oval, with her hair being brought forward to help. The projected attitude has changed from confident and welcoming to simply "come hither". It's disgusting. I'm sure Disney paid a lot of money to get expert advice on how to best sexualize Merida.

What really infuriates me is that it reinforces the very stereotype that is used to crush the spirit of so many girls in high school, including my daughter: if you want to be a princess (i.e. one of the popular girls), you have to be pretty and sexy and well made-up.

Lisa, the image you present is not the same image as what is presented on insidethemagic. The image you present as the horrifying remake is actually an image that has been stretched vertically. As anyone who has played with the sizes of images, when you vertically stretch an image of a standing person, the person appears to have, "[taller] eyes and more arched eyebrows, plumper lips, and a thinner waist." The hair could also be longer. Analogously, if you horizontally stretch an image of a standing person, the person would appear to have wider eyes and flatter eyebrows, thinner lips, and a wider waist.

Indeed, if you compare the image that you post with the image on insidethemagic, you'll quickly notice the differences.

I'm not the only person who has pointed out this error. Hopefully, you will correct and/or clarify your assessment in order to reflect your error of assessing a clearly distorted image of the remake against the non-distorted image of the original. We all suffer from confirmation bias, and it appears that is what happened here. However, as academics, we should also be willing to correct ourselves when our analyses are shown to have fundamental errors.

Who needs a bow and arrows when you have a man to take care of you?

"any attempt to defend oneself from these psychotic projections or to assert that creators may create is evidence of a dark seed sprouting in the heart. It’s an incredible state of affairs. They’re not censors, though - oh, no no. You’ll understand it eventually; what you need to do is censor yourself." - penny arcade

Dork Tower has a topical comic:

Merida is kind of a pseudo-feminist icon to begin with. Pixar's first female protagonist is a princess - slightly disappointing, but whatever. Pixar's never been as culturally or narratively innovative as it has been technically. Of course she's going to be integrated to the rest of that toxic product line. What's surprising about a socially conservative company being socially conservative?