The Nuance of Heteronormativity

Clearly depicting a sexual encounter between two women, this billboard — posted on Doheny Drive in Los Angeles — looks like it would undermine heteronormativity: an invisibility of same-sex sexual and romantic relationships. 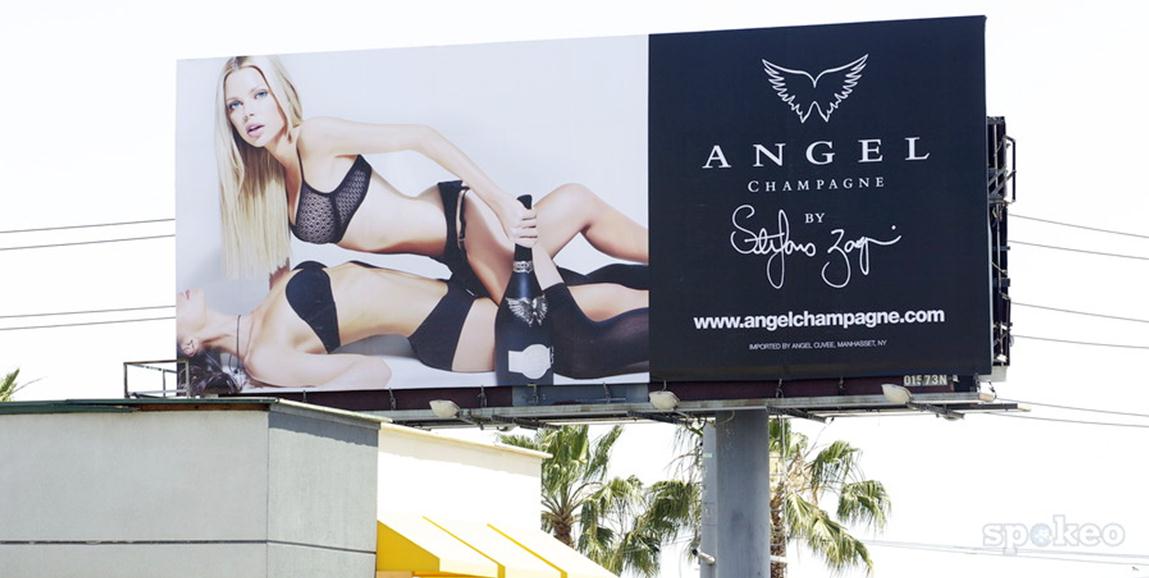 In fact, I don’t think it does.  For one, the aim of the advertisement is to appeal to male consumers. The women’s appearance is in conformity with the demands of the hypothetical heterosexual male gaze.  They have long groomed hair and are wearing sexy lingerie and make-up. They are arching their backs and sticking out their busts and butts. The performance of male gaze-compliant femininity is clear, making the male viewer an implicit part of the advertisement.  This enforces heterosexuality and promotes heternormativity instead of undermining it.

Sianni Rosenstock is a freshman at Occidental College. She is an intended Sociology major and Studio Art minor.

With all due respect, your basic argument is 'they're pretty, and therefore could not be lesbians." *That* reinforces so many heterosexist, homophobic, and plain old sexist tropes it's hard to know where to start.

Nice summary, though I think you missed a couple of things that make it even more evident that this is designed for the male gaze - first of all, the woman on the bottom has half her face removed, dehumanizing her and making her nothing more than an object. (And what is that pose? Is she doing yoga? Is the floor made of lava?) The blonde on top is looking at the camera/male viewer, not at her partner. This is not a participatory act between two women, this is a game of Simon Says. (Simon says, arch your back! Tilt your head up! I didn't say Simon says, brunette lady!)

*Tilts head* Unless the blonde is going to bash the brunette's brains out with the bottle, I don't even know why she's gripping it that way. It's not as if they can open the bottle, there's no bottle opener. Or glasses.

Or maybe both of them are on a boat and the blonde is going to inaugure it. It figures.

Semi offtopic: It's weird for me to see American sparkling wines referred to as "champagne". In Europe, it's not champagne unless it's been made in the French wine region of Champagne.

Besides the fact that it represents the missionary position which is, I suspect, not the usual position in many woman-woman sexual relationships (setting aside the use of sexual aids). It could almost be viewed as intending that the woman on top be recipient of the phallus represented by the champagne bottle as weilded by the bottom or some imagined male representative.

Finally a well thought out opinion. Although I'm unconvinced that it "enforces" heterosexuality, I understand why the author would feel compelled (enforced?) to throw out a few conforming terms/phrases. Otherwise, an interesting and very thoughtful analysis that seems to be spot on!

I wish I could be more surprised that such an image would even be allowed on a billboard. But we're so used to the objectification of women being tied to marketing that hardly anyone questions it anymore.

Perhaps this is just me, but I'm a female bisexual and actually find this billboard to be pretty attractive. Maybe I suffer from societal brainwashing, but I feel like it is a bit of a jump-of-the-gun to assume that this is only attractive to the male eye. I /wish/ that there were more advertisements that held honest depictions of people and their relationships, but I'm glad to see there's anything other than heterosexual advertisements being displayed at all. When I was growing up, there was literally nothing to indicate that being with another woman was okay (so much so that my mother kept her own bisexuality from me for many years.) If the shift has to begin with unrealistic women, let it begin!

"The women’s appearance is in conformity with the demands of the hypothetical heterosexual male gaze. They have long groomed hair and are wearing sexy lingerie and make-up." --this is a problematic analysis :/

You learned to parrot all the hackneyed things your feckless education is giving you well.

That and the two women are completely detached from one another, they do not look at each other, and are barely even making physical contact. Instead they are on display to the unseen third party- the man. And of course the second woman is only a body, with no head, making her simply on object and not a participant.

This demonstrates full mastery of knowing what your professor wants your conclusion to be and twisting your observations to fit that conclusion. You are ready for field work intended to confirm pet theories.

Why can't there be a female gaze here? Without a speech bubble saying "Hi, Ted," there's no reason a woman can't be the observer, too.

Gee, what a surprise, a sexist lingerie ad with hot chicks pretending to be lesbians *rolls eyes* How many of these dumb ads Victoria's Secret does, and why is anyone surprised? Why is this crap news, this is a bunch of junk designed to sell sexy underwear. And what is this heteronormaty junk, there are more straight people than homosexual people so why is it such a big deal. I've looked through this site and all I see is folks analyzing stupid ads and crap, do you actually get paid to do this and does everything offend you? I'd love this job, this way I can sit on my butt and see ads and complain about them. If this is sociology, then this is a complete waste of time.

The aim of the advertisement is to appeal to as many consumers as possible, as most advertisements do. Sure you can spin the presentation that way, but what is the point to appealing to just lesbians to bisexuals? From a marketing perspective I'd also seek to appeal to as many people as possible, if the women in the ad appeal to heterosexual men, lesbians, and everyone in-between how does this promote heteronormativity at all?

As a lesbian and a feminist, I despise advertisements like these (and so do the vast majority of lesbians). I just wanted to say that I really liked your analysis as it didn't try to cover it up as being *empowering a woman's sexual desires* as all that is what I seem to hear these days lmao!

These advertisements aren't really selling champagne, but really, the women's bodies. Not only with the blatant sexualizing/objectifying of women, but the ad also fetishizes lesbians, which all together is offensive and demeaning to me. Just because this ad depicts of two half naked women together, it is not in support of lesbians, in fact, this ad is homophobic as hell. All it really says to me is that lesbians are "ALL ABOUT FUCKING!" to straight men. Lmao Straight men are *all* for lesbianism as long as the women are visually pleasing to them. As long as these women are skinny, long haired, and feminine. As long as they are young, docile, and powerless. But once they see a lesbian that doesn't convey that look (which is like 90%), we become worthless to straight men.

Look at the way her mouth is opened, the way her body is positioned, the way she holds the champagne, and what she is wearing. All purposely to please the male gaze. It pisses me off that males get off of vulnerable women.

And to all the bisexual/queers that have commented so far, I don't believe that you actually ENJOY these ads 100%.