A new report by the ACLU reveals that “debtors’ prisons” in Ohio.  The phrase refers to the practice of imprisoning someone for the failure to pay fines.  This practice is in violation of the U.S. Constitution. Still, people who can’t afford to pay fines issued in response to traffic violations or misdemeanors are being routinely imprisoned in at least 7 out of 11 counties studied. 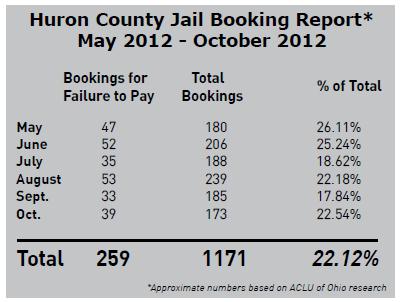 Among the worst offenders is Huron County.  An investigation found that as many as 22% of the bookings in Huron were for failure to pay a fine, usually coded as “contempt.”  Typically this resulted in a 10 day incarceration.  The state would then charge them fees related to being jailed, making it even more unlikely that a person would be able to pay.

The ACLU profiles several individuals.  One is a young man named John with a girlfriend and a nine-month-old daughter.  He was busted for disorderly conduct and underage consumption of alcohol, plus a few other related charges, and fined $1,300.  He agreed to a monthly payment plan to pay off the fines, but wasn’t able to make the payment every month.  Norwalk County, in response, put him in jail for 10 days.

He came out of jail owing more and the cycle continued.  At the time of the interview, John had been incarcerated for a total of 41 days and had incurred an extra $1,599.10 in fees related to his incarceration.  He had paid off $525 of the original $1,300, but owed an additional $2,374.

The ACLU points out that this is obviously an impossible cycle.  A person who is struggling financially may lose their job if they are incarcerated for ten days, especially if it happens more than once.  Meanwhile, loading on additional fines virtually ensures that they won’t be able to pay.  Moreover, however, they point out that it’s not good for Ohio.  The costs debtors incur don’t pay for their incarceration, so the state loses money each time they do this.  The net loss for the state in John’s case, for example, was $3,853.

Would those be, by any chance, private for-profit prisons?

I agree that requiring them to pay for their incarceration is a bit much. It should be one or the other when the debt in question is a government penalty for breaking the law (and provided that the statute specifies jail time as possible penalty). There has to be *some* penalty if the person is unable or unwilling to pay (or what incentive would there be to *ever* pay a fine?), but an infinite cycle of increasing debt/jail time is not a reasonable penalty.

The information I have been able to find from googling seems to indicate that the Huron County jail is a public entity.

This actually happens quite a lot here in Kansas as well. It's always listed as "contempt of court" on the booking page.

Mississippi does this statewide. Its institutionalized. Can we get an ACLU injunction?

I'm sure it will come as a shock to everyone that Ohio has recently been in the news for having blatantly corrupt for-profit prisons.

It's quite common, apparently:

Quite aside from whether or not the practice is constitutionally sound, it seems to me that it is ineffective at getting people to pay fines, at reducing crime, and at improving public welfare. If that is the case, the practice of jailing people for failure to pay should be abolished at every local level, regardless of federal considerations.

I went to jail for a car registration ticket I couldn't afford to pay, being a single mother living in Southern California. Went back to court to see if I could do community service and the judge said I could pay the fine then--a little over $500--or go to jail. As I couldn't pay the fine "right then" nor, in that time frame, call family to borrow money for the fine, I was put in jail. The most absurd part was that my bail was $25,000!

I was relatively young and inexperienced, but after I learned a little about the law and what is and is not constitutionally protected, I realized that what happened to me was almost assuredly a violation of my rights. It's unfortunate that I didn't know that then. To think of that judge on the bench for years later, allowed to do that same thing to anyone he arbitrarily disliked is horrifying. It was bad enough that it happened to me, but it's shameful if it's something widespread and systemic.

Wait till Obamacare hits you right between the eyes! People will not be able to afford it ... and if they do already have insurance, that coverage will double or triple... and then they can't afford that either. So the feds dip into your bank account... confiscate money, leaving you will no way to make your home payments, buy food, pay utilities, or whatever else... and so you lose your home and end up in debtors' prison.
(Of course, criminals and gangbangers will NEVER pay anything since they are "entitled" to their lifestyle..... and YOU will have to cover their costs with your taxes too.)