Assimilation Among 1st- and 2nd-Generation Immigrants 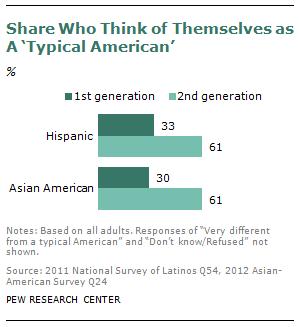 These data should calm the fears of people who think that high fertility rates among immigrants will harm the country by creating a “dependent” underclass or a dangerous population of non-patriots.

Quick fix please - the children of immigrants are actually the second generation. First generation is the immigrants themselves.

Please be more precise with your language. 1st gen is the people who immigrate, 2nd gen is people born in the US and are NOT immigrants. The grandchildren of immigrants are the 3rd generation and are difficult to distinguish in many data sets. The tables you posted also provide this information. The few studies that have looked at the 3rd generation (eg Telles and Ortiz) show that by the 3rd gen there is some type of downward assimilation happening; this is attributed in part to racialization and loss of the "immigrant advantage" posessed by the 2nd gen.

You want to use REASON to solve the problem?

Nothing will calm the fears of people who believe that racial dilution will harm anything.

The pew study illustrates an issue that many people studying assimilation face - what is the larger cultural context to which the group is assimilating.

In other words, many second generation Mexican-Americans in California consider themselves to be "typical Americans" and they are "typical" for the area and state in which they live. HOWEVER, CA is a majority-minority state with heavy Hispanic influence. Many of these second-generation individuals are in environments where there are large Mexican (and other Hispanic ethnic group) populations who are also second, third, fourth, and so on generations. There is a predominance of ethnic markers such as restaurants, fashion, store signs in both english and spanish, food routinely stocked in "regular" stores, so what is "typical" where they are located can be very specific to where they are located.

California is particularly problematic for looking at assimilation and making conclusion regarding second plus generations being "just like everyone else" because it contains at least a third of all Asian and Hispanics located in the US in that one state. Consequently for those of us living there, the establishment of ethnic enclaves where culture is being constantly reinforced by new immigrants and then the mixing of various cultures means that "typical" Americans living in California (of all races) have experiences that are vastly different from "typical" Americans living in the midwest or east coast. Furthermore, there are more and more signs that some cross assimilation has been taking place between various Asian and Hispanic cultures as well due to the close proximity and cultural mixing going on.

As someone who often goes other places, I find a lack of what I consider to be markers of cultural diversity even in places like NYC because signs aren't in 3 languages, stores don't stock BOTH asian and hispanic preferred food stuffs, etc. etc.

Anyways, just pointing out that what is a "typical" American varies by location.

[…] The fear that waves of immigrants will swarm the country and a generation later we’ll be speaking Insert The Language You Fear Here is unfounded. Research shows that America is the Borg; resistance is futile. The children of immigrants, and especially the grandchildren, will be assimilated. […]