“You just have to be cheerful about it and not get upset when you get insulted,” said rocket scientist Yvonne Brill.

She must be chuckling in heaven, because her obituary at the New York Times made the common mistake of making her femaleness and femininity a central part of their retrospective.  After objections, NYT corrected the obit.  Here are the tracked changes, courtesy of NewsDiffs: 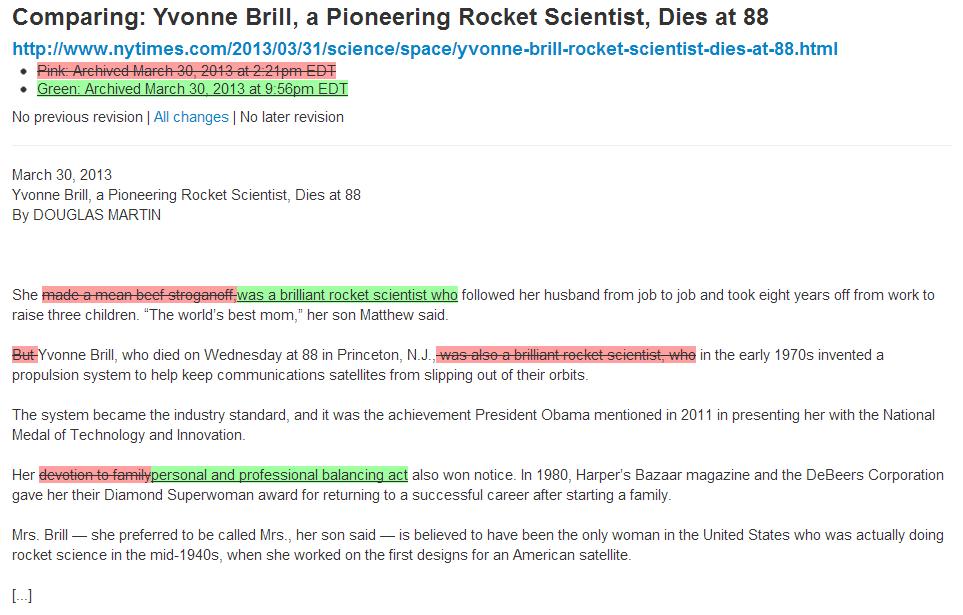 At Feministe, Caperton offers a nice discussion of this phenomenon and draws our attention to the Finkbeiner Test, named after journalist Ann Finkbeiner.  Inspired by the Bechdel Test for movies, the Finkbeiner Test is used to judge whether stories about women focus excessively on the fact that they are women.  To pass the test, the story cannot mention:

We’ve documented lots of instances of the men-are-people and women-are-women phenomenon.  It’s no wonder it shows up in obituaries too.  I’m glad that we’re becoming sensitive enough to the issue to notice it and that institutions like the NYT are responsive enough to change the most egregious examples of it.  Next step: prevention.

This is one online uproar I just couldn't get behind. The mention of her home-cooking didn't strike me as offensive (although the line about following her husband around did irk me). Rather, her role as mother humanized her story. I believe most people (men and women) would be proud to have an obituary that highlighted their family lives and interests over their job descriptions.

I'm personally not hot on the Finkbeiner Test because sometimes, the women eulogized have had to put up with a lot of shit, and *it does little good to pretend that that kind of shit has never happened.*

For the same reasons, it would be strange to think of an obituary of an African-American trailblazer that omitted the deceased's ethnicity. Or, say, just think of a future (very in the future, damn I like the guy!), hypothetical obituary of George Takei that omitted any reference to his childhood imprisonment at a Japanese American camp, his homosexuality or his fight for equal marriage rights, or how he's been the role model of several generations of Asian Americans. That would be erasing a lot from his life.

Might this be a place where we level-up as well as down? I.e., mens' obits should also as RoseJB says, "highlight[] their family lives and interests over their job descriptions"?

What's wrong with mentioning someone is a women, is a role model for other women, and is a trailblazer in her field? In fact, there are some studies that show it is particularly important to demonstrate successful female role-models in male-dominated fields, because it encourage the next generation to be attracted to the field with better gender parity. When it is no longer noteworthy that someone in a particular field is a women, we will know feminism has succeeded - but until then the feminist thing to do is to note it whenever you can!

Actually, I the last two points of the test are worth having in an obituary, since not pointing out the female pioneers leads to thinking that there are no women in a field.

The fact that this woman's professional legacy, the very thing that qualifies her for an obituary like this, takes a back seat while the article opens on her husband and kids instead is the more striking.

However, the obituary also says that, as a student, "She ... became only the third female president of the Oxford University Conservative Association.", which is considerably more tenuous.

[...] wish I could say all of this was new and startling, but it’s the same ol’ same ol’ since well before my time. All of us, women AND men, keep juggling with sexism in our lives. In the [...]

[...] post by Lisa Wade PhD at Sociological Images, “Men-are-People and Women-are-Women: The Obituary Edition” outlines the changes made to the obituary by the New York [...]

Things like this really irk me. There was a documentary on a local tv channel some time ago, about Condoleezza Rice. The promo was running for weeks and it started with "She didn't manage to raise a family of her own, but..."

[...] since too often the contribution of women either isn’t recognised or falls into the “men are people, women are women” [...]