The Pew Research Center put out a report this month titled, “Modern Parenthood: Roles of Moms and Dads Converge as They Balance Work and Family,” written by Kim Parker and Wendy Wang. It analyzes trends in time use among men and women in families, showing the big changes since the 1960s, and adds Pew’s own survey data on attitudes and perceptions. Lots of interesting information.

But what jumped out at me was that the stall in progress did not feature much in Pew’s narrative. I really noticed that when the Joy Cardin show featured the report on Wisconsin Public Radio, and Cardin’s intro was this:

Family gender roles are converging, according to a new survey from the Pew Research Center. Father’s have more than doubled the time they spend on housework. More moms are paid to work outside the home (audio here).

Those facts are true, but old news — older than the new news, which is that nothing much has happened since the early 1990s.  Here are the trends, in Pew’s nice graphics. See if you can find the stall point in each figure. 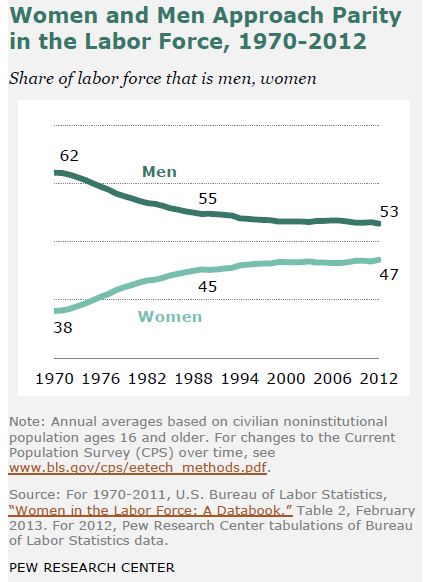 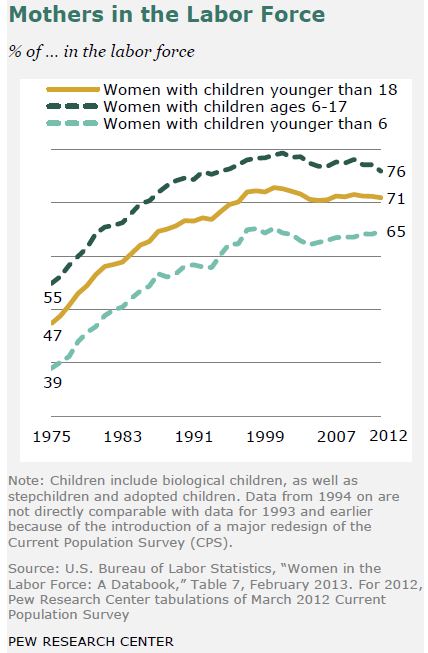 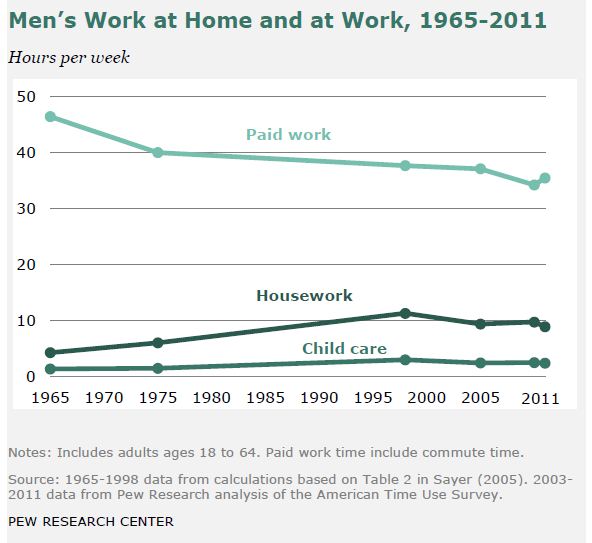 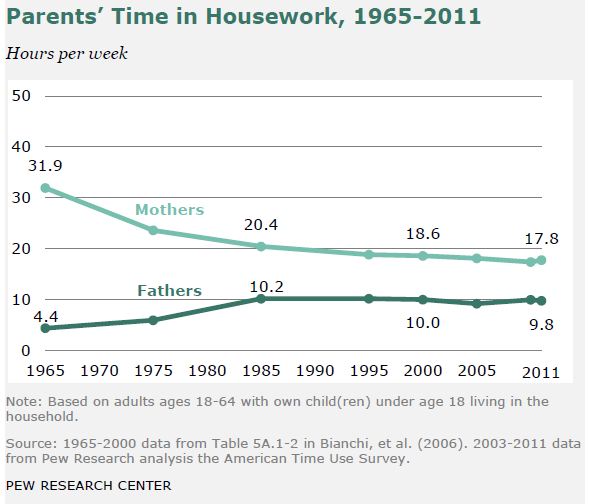 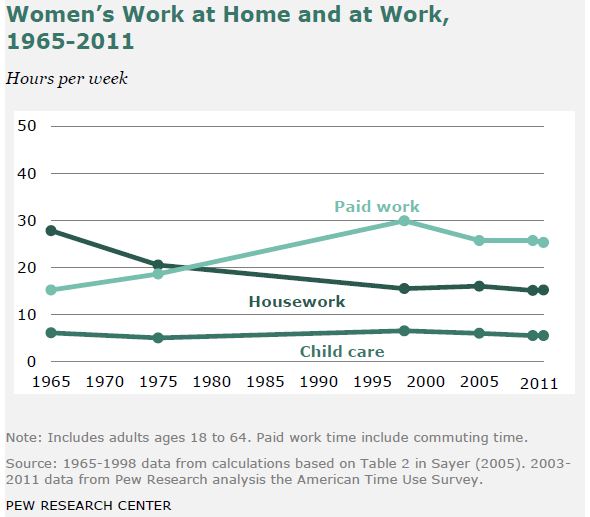 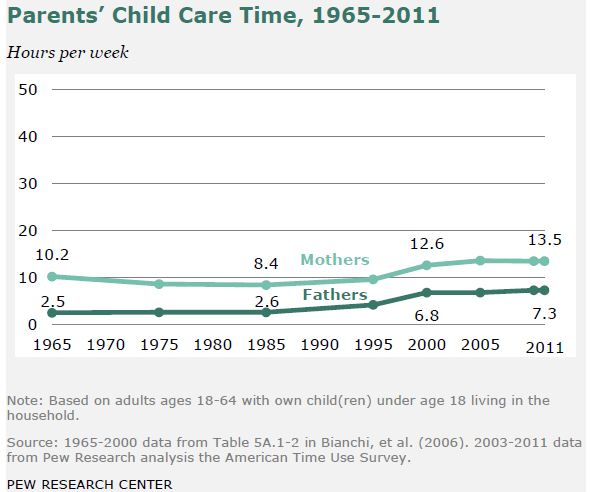 The last one, parents’ child care time, is the only one that shows continued real progress, albeit slower, in the last decade.

I favor three explanations for this gender stall:

These explanations do not exclude others.

This explains why the birthrate and marriage rate are both going down. Women have little to no incentive to participate. Maternal instincts are not enough to compensate rampant exploitation and astounding inequality. Women stuck doing TWICE as much time on child care? And housework? Were I in my early twenties, that would be enough to scare me away from marriage. In fact, it did. And I didn't even have the research - just the anecdotal evidence was proof enough for me. Turns out I was right. The only way to change this is to boycott parenting and marriage altogether. My mother did something like this and it worked: she just stopped doing the family shopping or any housework, until my Dad had to do everything or live without food in a filthy house. He changed. The thing about this is you may have to lower your standards so that no, you can't exactly eat off the floor. Another thing women can do is leave first, so that the male spouse is the one who has to take of the kids or be charged with abandonment. This isn't any more heartless than what millions of men have done in the past.

Why is personal choice not included as a factor? Last I checked, people got to choose who they had kids with (if they even have kids at all,) and how to divide up the time and work.

I think, women spend more time with their children for two reasons:
1. They enjoy spending time with their children.
2. They care more about their children than men do.
Child rearing is hard work, unquestionably, but so is any work that you put effort to and want to do it well. You may call it parenting mania, but research after research shows that spending time with one's children pays off, at least in terms of their success in school: http://www.sciencedaily.com/releases/2008/05/080527123852.htm. Men just don't care enough. The reason for their not caring, I think, is that they are not brought up to care. You can argue for biology, but I think that even if women are more biologically predisposed to caring about their offspring, you can teach men to do the same, if you start early and do it right. You can't take a 30 year old guy and make him instantly care about something he never even thought about. Women, on the other hand, judge each other by their children's success.

Same goes for housework, I think; men are brought up not to care. It's everywhere in pop culture - men are supposed to be sloppy. Even if they try to take on responsibilities, wives will have had years of experience doing the work, and they care much more. Luckily, women enjoy this type of work less, so we see more changes there.

How does the last chart show any progress in the last decade? Men's hours on childcare have gone up half an hour since 2000, while women's time spent on childcare has gone up almost an hour, so the gap is even larger than it was. If anything this reflects the increasing norms of intensive parenting, and how it has impacted women more than men.

Its awesome feeling at the using this article because here we fix windows 10 mobile connections have no need to take any knowledge about the fire fox.

To tell you the truth, up until last week I’d never baked with puff pastry before. I usually do as much of my baking as possible from scratch, but the idea of making homemade puff pastry is fairly intimidating – I’ve seen them do it on the Great British Baking Show and someone always makes a giant mess of it. So I figured I might as well give the frozen kind a try, and it worked like a dream.