The Austerity Agenda and Public Employment

While some austerity advocates really fear (although incorrectly) the consequences of deficit spending, the strongest proponents are actually only concerned with slashing government programs or the use of public employees to provide them.  In other words their aim is to weaken public programs and/or convert them into opportunities for private profit. One measure of their success has been the steady decline in public employment.  Floyd Norris, writing in the New York Times notes:

For jobs, the past four years have been a wash.

The December jobs figures out today indicate that there were 725,000 more jobs in the private sector than at the end of 2008 — and 697,000 fewer government jobs. That works into a private-sector gain of 0.6 percent, and a government sector decline of 3.1 percent.

How does that compare? It is by far the largest four-year decline in government employment since the 1944-48 term. That decline was caused by the end of World War II; this one was caused largely by budget limitations.

The chart below, taken from the same post, also reveals just how weak private sector job creation has been over the past 12 years (compare the top three rows — the presidencies of Obama and Bush — w

This graphic from the New York Times highlights just how significant the decline in public employment has been in this business cycle compared with past ones.  Each line shows the percentage change in public sector employment for specified months after the start of a recession.  Our recent recession began December 2007 and ended June 2009.   As you can see, what is happening now is far from usual. 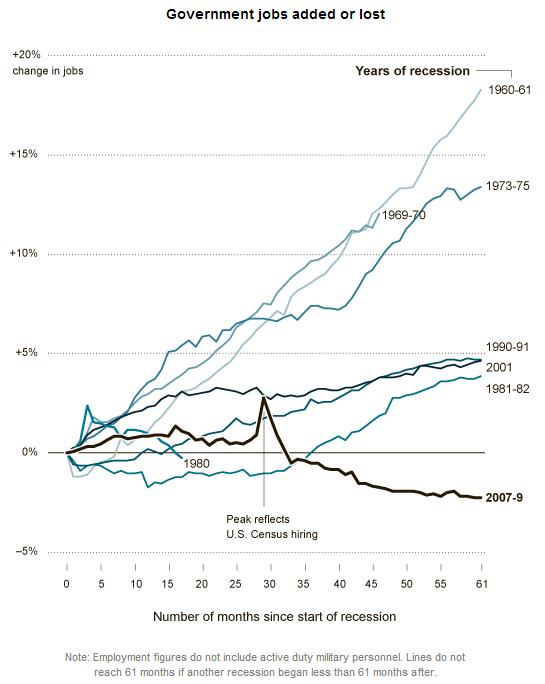 It is also worth noting that despite claims that most Americans want to see cuts in major federal government programs, the survey data show the opposite.  For example, see the following graphic from Catherine Rampell’s blog post.

Not surprisingly, this assault on government spending and employment will have real consequences for the economy and job creation. All of this takes us back to the starting point — we are talking policy here.  Whose interests are served by these trends?

The way to cut spending isn't to reduce the budget while keeping the goals the same, it's to cut goals.

For example, cutting the law enforcement budget without reducing the mission of law enforcement would simply lead to all-around crapsack LE, but de facto decriminalizing a handful of currently controlled substances currently allows major police departments to operate on a much reduced budget, by not spending resources on those areas; the energy budget could be cut significantly without other losses if the support to big oil and opposition to nuclear power were removed from the actual agenda, and anti-terrorism could be disbanded entirely with less negative effects than failing to ban high-performance cars.

THE AUSTERITY AGENDA AND PUBLIC EMPLOYMENT #Economics | Welcome to the Doctor's Office — April 2, 2013