The Washington Post has provided some data on medical costs across a selection of countries (Argentina, Canada, Chile, and India in grey; France, Germany, Switzerland, and Spain in blue; and the U.S. in red). The data reveal that American health care is very expensive compared to other countries. 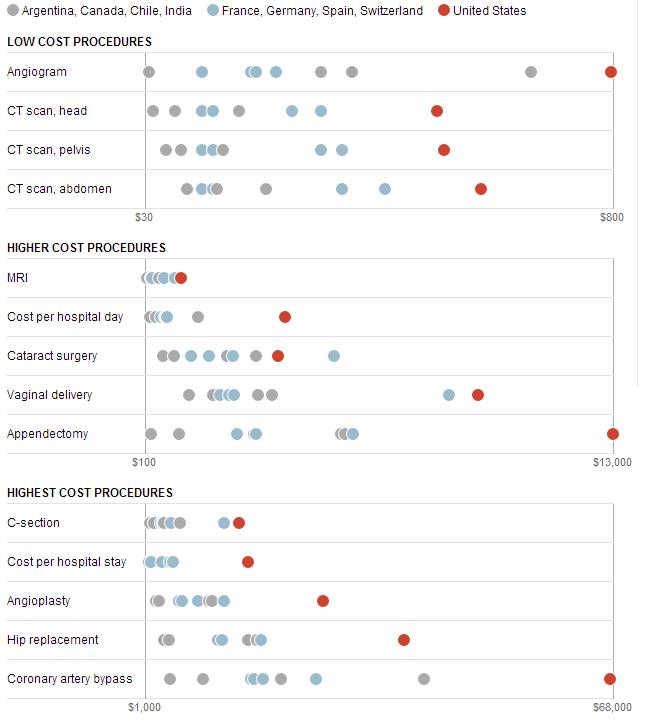 There may also be cultural differences between the U.S. and other wealthy countries, differences about whether greed, for lack of a better word, is good.  How much greed is good, and in what realms is it good?  Klein quotes a man who served in the Thatcher government:

Health is a business in the United States in quite a different way than it is elsewhere.  It’s very much something people make money out of. There isn’t too much embarrassment about that compared to Europe and elsewhere.

So we Americans roll along, paying several times what others pay for medical procedures, doctor visits, and drugs.

If medicine were actually run as a fair business run by normal principles of greed and risk, it would be much cheaper. In how many other businesses does the government directly subsidize a third party payer model to the point of driving out all reasonable incentives for actual competition? Every policy we have only drives prices higher. The new "reforms" only worsen this issue - premiums are already rising.

There's a multitude of factors, among them a scarcity of healthcare providers, but the right solution isn't importing cheap Chinese doctors at government expense to provide low-cost appendectomies.

brutus, Govt. can and indeed does set prices. If Medicare says it'll pay x dollars for y service, it's 'setting the price' for y. And health care providers go along with it, albeit grudgingly. And please cite 'scarcity of health care providers'; I suspect it's the opposite.

The high price of care in the US as compared to others is due to many things, none of which is govt. interference: excess capacity of very expensive apparatus, the propensity for doctors/hospitals to want and buy the latest & most expesive equipment, the profits of the insurance companies, the high price of liability insurance, excessive cya testing, and to some extent, that administrators and speciality doctors are compensated very handsomely.

Competition in something like health care simply does not work.

Working here are professionals who have tremendous knowledge. There is also an online chat so that you can communicate with ordinary people. The Service is great, so go ahead and learn!) And who is afraid as I was, there is a trial version for you))

I have known for a long time about the existence of online psychologists who talk to you through a camera. But until recently I thought that it was all nonsense, that I would figure it out for myself. I didn't. As soon as I inquired about the best online therapy sites, I chose the right one on Dr. Mental's website and within a week I already knew how messed up I was. Through the consultation I realized that I needed cognitive behavioral therapy online. Every session opened my eyes to my problems. How grateful I am to Dr. Mental, for without him I would probably have lost my mind by now.

I was sad to read that The data reveal that American health care is very expensive compared to other countries. I will share this on https://moderndogmagazine.com/articles/best-cbd-dog-treats/133241 asap

The healthcare industry began to develop rapidly with the advent of CBD products. Because high-quality cbd products help people effectively take care of their health. Perhaps some of you are currently thinking about opening a cbd business. What, you just need to study this blog https://www.digitalfodder.com/cbd-affiliate-programs/ and think about it. The CBD business is now very successful.