What Was in the 1941 College Woman’s Closet?

Originally posted in 2010. Re-posted in honor of Women’s History Month.

The New York Public Library posted a page from the first issue (September 1941) of Design for Living: The Magazine for Young Moderns that I thought was sorta neat for bringing some perspective to the increase in the amount and variety of clothing we take as normal today–but also, to my relief, the acceptance of a more casual style of dress. The magazine conducted a poll of women at a number of colleges throughout the U.S. about how many of various articles of clothing they owned. Here’s a visual showing the school where women reported the highest and lowest averages (the top item is a dickey, not a shirt): 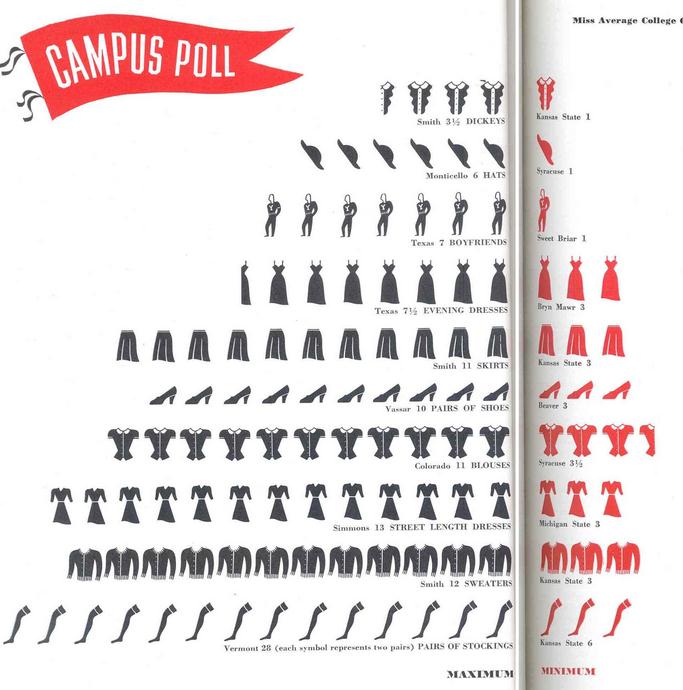 Overall the women reported spending an average of $240.33 per year on clothing.

Hats for women were apparently well on their way out of fashion:

Can you imagine a magazine aimed at college women today implying that you might be able to get away with only three or four pairs of shoes, even if that’s what women reported?

At the end of the article they bring readers’ attention to the fact that they used a sample:

I can’t help but find it rather charming that a popular magazine would even bother to clarify anything about their polling methods. So…earnest!

I'm missing some context here... since when were boyfriends considered a clothing item?

If the average for the Texans is 7 boyfriends... I wonder what the maximum was?

As a Smithie, I clearly need to stock up on dickies, skirts and sweaters. Or, rather, I need to see if great-auntie still has that black dicky (as I have none), but am fine on sweaters and skirts.

Who has time for seven boyfriends?

i'm trying to figure out if "boyfriend" was slang for something. a letterman's sweater or something equivalent to today's sweatshirt/hoodie with your school's name on it?

Wow, some women have more shoes than that? I am behind the times, I guess.

"I can’t help but find it rather charming that a popular magazine would even bother to clarify anything about their polling methods. So…earnest!"

They actually cared about how they were perceived back then.

A lot of colleges, particularly the women's colleges (shout out to my alma mater, Smith!) had dress codes at the time, so even if the students would have owned pants in their at home wardrobe or had a couple of pairs for slouching around the house/dorm in, they wouldn't have been considered really a part of the wardrobe to be measured. They weren't allowed to wear pants to class, would not have worn them to any social function, and many of these colleges also regulated how students dressed when they were off-campus. Students could have been disciplined for appearing in town in pants, just as they could have been for going to certain restaurants with dates but no chaperone or staying out after curfew. So the omission of pants is really not all that strange.

And I'm pretty sure boyfriends meant boyfriends, and the fact that Texas "girls" had 7 but Bryn Mawr Mawrtyrs had 1 is probably both a dig that could be read both ways (girls at state schools are sluttier than Main Line Ladies at private colleges, OR girls at Bryn Mawr are stuck up bluestockings/society ice princesses and Texas gals know how to have fun and attract men). But remember that what a modern college student would do with her boyfriend might not be what a college student at that time could do, considering the stifling rules put in place to protect students' virtues.

Just for fun: My mother went to an all girl's "junior college" in Virginia in the early 70's. If she wanted to take a train to one of the men's schools like VMI to visit have a date with a guy, her mother had to write the house mother of her dorm giving permission. When she got to the other college's town, she'd have to stay in a pre-approved guest house. If she didn't meet her curfew(yes, she had a curfew hundreds of miles away from her own mother) the "mother" at the guest house would notify her house mother who would notify her real mother. Then she'd be on restrictions.

And that's why I had a curfew in my mother's house until I was 22.

The rules put in place to restrict the behavior and movements of women at women's colleges (and even some co-ed colleges) are actually really fascinating. Reading the old college handbooks from the Smith archives used to be a favorite research past time of mine. All of the houses (our word for dorms) at Smith still have "Beau Parlors" special rooms on the first floor where students had to meet male guests, and no male guests were allowed above the first floor unless they were a father or a brother, and even then, very rarely.

Also, in many of the old college newspapers there would be special restaurant advertisments announcing that such and such a restaurant was "approved by the Smith College Social Committee as suitable for unchaperoned rendez-vous"

Seriously, you could do a whole sociological images book on these handbooks alone.

I take one fashion and style magazine, and it almost always refers to a unisex sweater (no flowers, poodle dogs, etc.) has a "boyfriend" sweater. I am thinking maybe the 7 boyfriends listed on the chart might be cardigans, not guys. But, maybe not!

Perhaps, like R Kelly, the boyfriends are trapped in the closet.

Remember that these clothes wouldn't have been like what a college student would own today. Some of the clothes would have been hand sewn by the student, or her mother, or made-to-order by a tailor or seamstress--so they would likely have been better fitted and more durable than the mass-produced items picked up in a mall or big-box store. Also note that many of the items wouldn't have been machine-washable; that graphic represents a whole lot of handwashing and drycleaning. I have a home-ec manual called "Clothing for Moderns" from the early 1960s, and a lot of pages are spent on airing and storing wools, spot-cleaning silks and linens, and altering lined jackets and skirts--activities most college students today wouldn't begin to consider trying.

I'd like to add something that my grandmother told me about her college days (graduated '52, if I remember correctly).

She told me that, especially her first year of college, when she was unmarried and attending a private college (Antioch), everyone mailed their laundry home to their mothers. There were not facilities in the dorms as we have now, and self-serve laundromats were nonexistent/unheard of/not used.

I suppose the other options would have been doing your laundry in the sink or sending it out with a service. But my grandma mailed her dirty stuff home to her mother every week or so and then her mom sent the clean things back. Grandma noted that people had fewer articles of clothing then, and they wore them a few times between washings, whereas we now have many pieces of clothing and mostly wear them once before washing.

I'm a grad student and I've only got three pairs of shoes. One pair of Chucks for the day, one pair of ankle boots for nights out and my work/hill walking boots. Am I just weird, or did peeps in 1941 have more money than me? I can't imagine the cost of all that extra frippery in today's money. :P

Overall the women reported spending an average of $240.33 per year on clothing.

I'm assuming that this was in 1941 dollars, which made me go to an online inflation calculator, and plugging in the numbers, we find:

Does anyone know if $3700/year on clothing is average for female undergraduates?

I am a 35 year old college professor in NY state - admittedly I am a standout exception, and often teased by my students for my shabbiness, but I have: only 9 pairs of shoes total, and that counts slippers, flip-flops and a pair of rubber barn boots. I have 3 dresses, 6 skirts, 0 suit jackets as i hate them, 4 cardigans sweaters, 3 pull over sweaters, 3 blouses, one black winter coat... you get the idea. Clothes are not important and continuing to accept that our careers can be defined by how trendy we are, how hipster (do you have a lime green blouse and wear a silver thumb ring?..oh wait.. that was MLA in 2003, dang) is dangerous. I admit, dressing in a fabulous , skirted suit can help in an interview, but, what helps more, or should...? Being a strong candidate. I am sick to death of hearing male tenored colleagues choose new hires based upon her suit, or lack of a cute one. Now, I am a supporter of clean clothes, that don't smell, and have few to no holes, but that is about it. Do we all really need those 15 pairs of jeans? Or that 100th t-shirt? I doubt it - almost never would i accept an argument that proposes women need more than 20 of anything. Society teaches us to want them. Period. Don't give in and spend your money on books.

That's $3700 in current dollars—a pretty substantial annual clothing budget. It would be useful if authors included inflation-adjusted numbers in their writing whenever they report historical prices.

About the amount that people pay for clothing then/now/etc.

I find it quite interesting, because global trade and labor helps to give us some wildly inexpensive products, including clothing. Quality wise though, most 50 dollar sweaters you would buy now would probably not make it through 30 years of heavy rotation, much less make it past a few decades in order to be resold (in a vintage boutique or something).

I think that cheap retailers change our perception of what clothing can withstand and how we take care of our stuff. We don't fix things anymore because it is just as easy to throw away something and buy another. Retailers don't have to pay attention to quality if people shop by price point. Target gets top notch designers to design the surface of my umbrella but the umbrella broke in 3 different places after 20 uses.

I don't exclusively buy top notch stuff, but I try to seek out better stuff because it makes my life easier because I can shop for something once. I tend to be a picky shopper, so buying more expensive shoes means I spend less time shopping around for a replacement as each cheaper pairs quickly degrades. I feel ok investing in a shoe repair bill and I tend to buy a few things that I love instead of needing a complicated storage solution for a bunch of things I am ok with. I appreciate the idea of having less, but of better quality.