In the Pittsburgh of my youth many decades ago, Rolling Rock was an ordinary, low-priced local beer – like Duquesne (“Duke”) or Iron City. (“Gimme a bottle of Iron,” was what you’d say to the bartender.  And if you were a true Pittsburgher, you pronounced it “Ahrn.”).  The Rolling Rock brewery was in Latrobe, PA, a town about forty miles east whose other claim to fame was Arnold Palmer. The print ads showed the pure sparking mountain stream flowing over rocks. 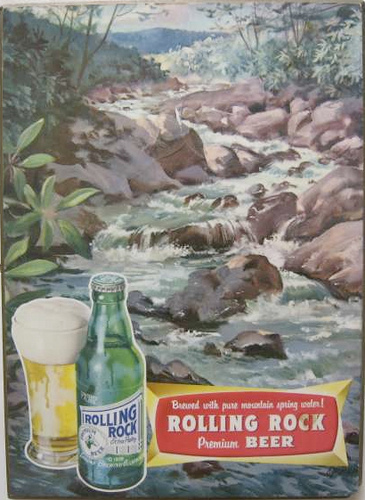 That was then.  In the late 1980s, Rolling Rock started expanding – geographically outward and socially upward.  Typically, when ideas and fashions diffuse through the social class structure they flow downward. Less frequently, the educated classes embrace an artifact of working-class culture. But why?  Their conspicuous consumption (or “signalling,” as we now say) is saying something, but what ideas about themselves and the social landscape are they expressing with their choice of beer?

I had an e-mail exchange about that question with Keith Humphreys, who blogs at The Reality-Based Community.  He too grew up in western Pennsylvania, and we both recalled being surprised years later to see Rolling Rock as a beer of choice among young stock traders and other decidedly non-working-class people.  But we had different ideas as to what these cosmopolitans thought they were doing.  Keith saw it as their way of identifying with the working class.

Those of us who grew up near Latrobe, Pennsylvania are agog when upscale hipsters who could afford something better drink Rolling Rock beer as a sign of their solidarity with us.*

I was more skeptical.  I saw it as the hipsters (or before them, the yuppies) trying to be even more hip – so discerning that they could discover an excellent product in places everyone else had overlooked.  Rolling Rock was a diamond in the rough, a Jackson Pollock for $5 at a yard sale.  The cognoscenti were not identifying with the working-class. They were magnifying the distance.  They were saying in effect, “Those people don’t know what a prize they have.  But I do.”

I had no real data to support that idea, so I asked Gerry Khermouch, who knows more about beverage marketing than do most people.  His Beverage Business Insights puts out industry newsletters, and he writes for Adweek and Brandweek.  He’s also beverage buddies with the guys who changed Rolling Rock marketing.  Here’s what he said,

[F]ar from expressing solidarity with the working class, urban drinkers far afield regarded it as an upscale icon in much the way that Stella Artois has claimed today — a triumph of pure marketing.

One ad campaign in the 90s, “Subtle Differences,” aimed directly at the drinker’s connoisseur fantasies.  Here are two examples: 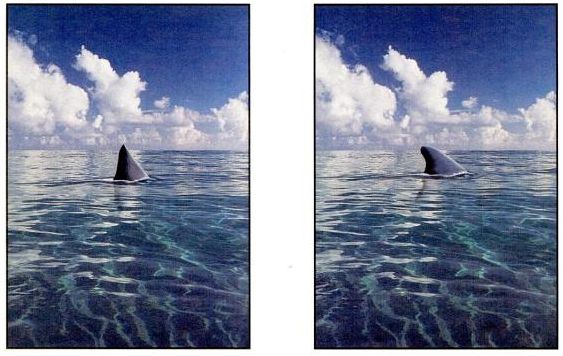 Words like nuance were hardly an appeal to solidarity with the working-class.  Neither was the strategy of raising the price rather than lowering it.

To the marketers, the nuance, the malt, bite, and body didn’t count for much.  Their big investment was in packaging.  Instead of stubby bottles with paper labels, they returned to the long-necked, painted-label bottles with the mysterious “33” on the back. Apparently, the original packaging, the  “Old Latrobe” reference, and the rest added notes of working-class authenticity. 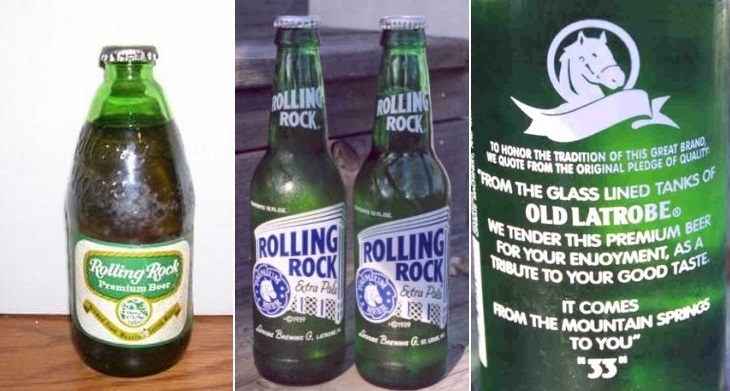 As for the actual beer inside those bottles, it may have once been what the ad copy said.  The brewers had tried to overcome the “watery” image from the beer’s early water-over-the-rocks imagery.  But when Anheuser-Busch bought the company in 2006, they closed the Latrobe brewery, and Rolling Rock became a watery, biteless product indistinguishable from the other innocuous lagers that dominate the US market.

I drank Rolling Rock in the mid-late 90s when I was an undergraduate at UW-Madison. I didn't know about its working-class origins or (as much as I can remember) the marketing campaign, I just really enjoyed the taste of it.

Having only tasted Rolling Rock after they were purchased by Anheuser-Busch, I've got to say that I didn't understand any of the appeal. But then again, I'm a real-ale fan, and so most of the stuff sold as "beer" in the US didn't appeal in general. I stayed in the happy confines of the micro-brewery world of Southeast Michigan, but I'm happy to see more ales offered nation-wide, especially since some of them actually taste pretty decent. I'm still partial to tasting the local offerings, but I know that ales are becoming increasingly popular in the US.

i thought it was one of the few small breweries still open; if i had known it was part of aconglomerate, i wouldn't have ordered it

There are examples for this in other countries: In Hamburg, where i come from, "Astra" beer used to be one of the cheapest working-class brands which was not known outside the city. They made a huge marketing effort to change that, creating an ironic, street-wise image which plays with the "red-light district" associations of the quarter of St. Pauli where it is made. So, by drinking "Astra", students and intellectuals were given the opportunity to feel part of the lower class (which, in Hamburg, has always been more glamourous than elsewhere) while at the same time keeping an ironic distance. This proved to be very successful: Today, you can order it in any hip bar in Berlin, Munich, or Zurich, often for a high price. Still tastes unconvincing, though.
Examples of the ad campaign (some of it clearly quite sexist stuff):
http://www.astra-bier.de/de/astra/werbung.html

[...] ADVERTISING: Sociological Images uses the interesting case of Rolling Rock beer to discuss the appropriation of working class iconography by upper class cohorts for the [...]

A couple of further examples of this kind of marketing you're talking about leap to mind:

1) Jack Daniels, a brand of whiskey made in Tennessee, markets itself in England with posters talking about a slow way of life and how they just keep making whiskey the way it's been made since 1800 and something. They have pictures of men sitting in chairs on a porch and lots of words about how they do things the old-fashioned way and so on. After seeing this for a couple of years now, I still laugh when contrasting it with their reputation that I remember from growing up in the USA, where it's mostly about young unsophisticated people, often well underage, getting blasted on Jack and Coke.

2) I stayed once in a boutique hotel in Madrid, and in the room was a free sample of what they positioned as a sophisticated Irish whisky. I wish I'd written down the exact wording, but it sounded pretty good indeed. This exquisite liquid was further presented as elite by being a single-serving bottle with enormous packaging around it. I couldn't even see the bottle until I got through the packaging, and then I laughed for five minutes when I saw that it was Jamesons. This is what working men in Dublin drink, along with Guinness. I happen to like it (which, since I'm a woman, was a violation of norms -- men looked a bit uncomfortable when they saw me with it), but in Ireland it's a normal, popular whisky that I don't think anyone would consider sophisticated.

It's worth noting that the Rolling Rock example and both of these are for alcoholic beverages. There is so much myth and symbolism tied up in what one chooses to drink, and it's easy to use that to sell drinks across international boundaries in ways that would be ludicrous in their country of origin. But Rolling Rock is managing it without even changing countries.

I got into Rolling Rock in the late '80s and early '90s, before I developed a taste for stouts, porters, and IPAs. I never took it for a "working class beer", or honestly I probably would not have been interested. I was aware of other people purposely drinking beers like PBR or haunting dives to sort of play at being blue collar, but that never interested me. I took Rolling Rock to be a kind of small, artisinal type beer for more refined palates (though honestly, even well before AB took it over, it was in fact watery and thus "smooth" for my immature beer palate) and never knew anything about its origins.

[...] Images posted about the marketing of Rolling Rock beer and its attempt to distance itself from its former working-class appeal. It’s been a lot of [...]

Born and raised in Pgh from birth until going to college in 1973 at CWRU, I had my share of Pgh Beers. I liked Rolling Rock, it was lighter, to me, than Iron City and Duke. I had forgotten Duke beer. That was my favorite. Now living in Chicago since 1980, folks here don't have a clue with this soapy tasting Old Style home brew.

This article caught my eye for two
reasons. The first being that all my friends and I are big fans of Rolling Rock
and drink it regularly. The second reason is because the aspects of marketing
are so interesting to me because it is almost a type of brainwashing. The
reason I started drinking Rolling Rock was the same as my friends but in a
different way.

The
first time I even heard of Rolling Rock was when I watched the film “Deer
Hunter” for the first time. Being from a small town in Pittsburgh all the characters
drank Rolling Rock. I don’t know if it was on purpose or not but this made the
beer seem really cool to me. Just like the author of the article said upper
middle class people for some reason wanted to drink the same beer as the hard
working people of Pittsburg, it made me feel cool. The reason all my friends
like to drink it is it kind of has that hipster attachment to it as if drinking
it is like saying, “what you’ve never heard of Rolling Rock?” Before reading
this article I never knew why Rolling Rock seemed so cool to my friends and me
but it has become clear that we have all fallen into the marketing trap they
set up for us. Regardless I will continue to drink it because I think it makes
me look cool. Cheers to the marketing team at Rolling Rock.

I drink it cuz it's the only beer that's 5.99 (bottles are 6.99 per 12 pack) that doesn't have the word Ice or light (lite) next to it. As ice beers are headaches in a can and light beers don't have enough flavor. Spent my early years in York P.A. But never heard of Rolling Rock til college.