The Dancing Hawaiian Girl, At Your Service

Originally posted in 2008. Re-posted in honor of Women’s History Month. Cross-posted at Racialicious.

The marketing for beach-related vacation destinations often capitalizes on the association of foreign beaches with (partly) naked bathing beauties. This intersection of race, gender, and sexuality that positions the “ethnic” woman as particularly sexually accessible have deep roots in our colonial past in which foreign lands “open” to conquest by the Western world were conflated with foreign women “open” to conquest by Western men.

The “Hula Girl” is a case in point.

Hawaii was colonized by the U.S. and, when the islands became a tourism destination, Polynesian women were transformed into Hawaiian babes ready and waiting to please tourists from the mainland.

One transformation was the hula. Widely understood to be an “authentic” Polynesian tradition, the hula was actually originally mostly a man’s dance. It was religious. It involved chanting and no music. There were no hip movements, just gestures. Basically, it was story-telling.

Today, the men take a back seat to women, who are scantily clad in grass skirts (not authentic, by the way), and perform exaggerated hip movements to music. So the hula is an invention, designed by colonizers and capitalists, to highlight the appeal of “foreign” women.

Despite the constructed nature of the hula girl, she’s been used to market Hawaii for over 100 years.  Here is an image of hula girls sent back to the mainland way back in 1890:

And from the 1940s (from IslandArtCards): 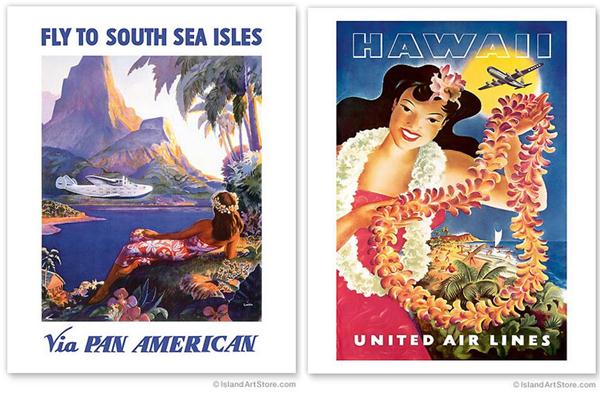 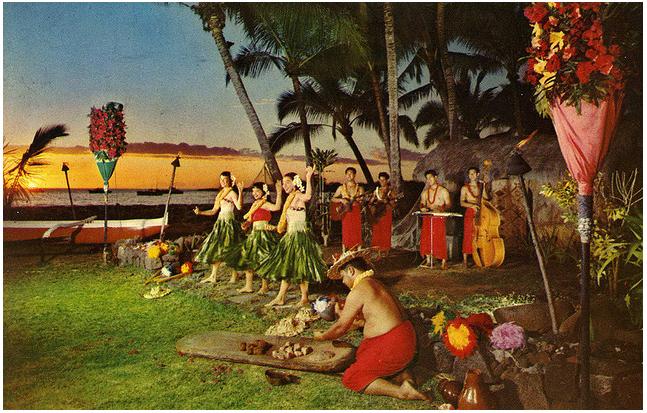 This picture was snapped by my friend Jason at a Trader Vic’s restaurant in 2008:

A Google Image search for “Hawaii postcard” in 2013 reveals that about half include the figure of a woman:

The phenomenon is a common one: women are treated as objects of beauty and aesthetic pleasure — exotified, in the case of “foreign” or darker-skinned women — and used to embellish a place or experience.  While lots of things have changed for women since the beginning of this particular example in the late 1800s, their role as decoration resists retirement.

[...] of race, gender, and sexuality that positions the ???ethnic??? woman as particularly sexhttp://thesocietypages.org/socimages/2008/05/20/the-dancing-hawaiian-girl-at-your-service/Moment of Truth Long Beach Press-TelegramKorin Cuico needed to make an immediate decision. She sat [...]

wy not give sweden a wisit summertime 15 jun - 15 august...?
if its green light . I try too fix palmtreas and catamarans and
canoets.

Tourism and the Objectification of the Native » Sociological Images — January 17, 2010

[...] more tourism-related objectification, see our posts on tourism in Hawaii, Brazil, and Thailand, and, related, these images of international adoption and onesies for [...]

First of all, I think some of your information about hula may be incorrect or subject to debate. http://www.kaimi.org/history_hula.htm
http://www.huladancehq.com/hula-dancing-history.html

So the hula is an invention, designed by colonizers and capitalists, to highlight the appeal of “foreign” women.

You're right in that the image of the exoticized "dancing hula girl" has been created and used by non-Hawaiian/local people as a marketing tool. I doubt that anyone in Hawaii appreciates or identifies with it.

But, BUT! Your statement really bothers me in that it suggests that all hula has been co-opted and is now inauthentic. There is a very strong movement to reclaim the more traditional hula culture. And while the hula auana does incorporate more Western influences than hula kahiko, I think that most of the people who dance it would disagree that it's solely the product of mainland imperialism. It's still Hawaiian at its very core, and still very much about storytelling.

By the way, I think the "hip movements" you talk about were present in the hula kahiko (traditional). The kahiko style movements do tend to be a lot stronger and the beat is usually faster, so they aren't as noticeable - but the hip movements are still definitely there. Men should also do the same hip movements that women do, in either style.

Also, the first picture from the 1950's - that's probably a ti leaf skirt. The first picture of the three women might be hau skirts. Raffia/grass is not authentic, but ti and hau do have some historical basis.

If you're interested in seeing some hula in its current form that would likely be considered "authentic", you might try searching for "Merrie Monarch" clips on Youtube. To narrow down results, you can search for specific divisions: "kane" - men, "wahine" - women, "kahiko" - traditional, "auana" - modern.

In the 8 months I spent on the Big Island of Hawaii in 2008, I saw one native person hula dancing. She looked to be in her fifties and weighed about 250 pounds. The nude beach near where I lived sported mostly old white men. Hawaii has so much to offer a visiting tourist: an erupting volcano, surfing, fresh chocolate, air that smells like flowers all the time, great music, fantastic produce, hiking, spelunking, skiing, and much more. It seems such a shameful waste to spread lies and half truths when the reality is so much better.

Orientalism and the Consumption of the Other » Sociological Images — February 11, 2010

[...] the people themselves are seen as objects for a (distant) touristic gaze, kind of like the generic mostly-naked-woman-in-tropical-paradise postcard that we still see today.  More examples of colonial era Orientalist postcards depicting Burma [...]

[...] between the white male and the exotic Latina. For more examples of this, see our posts on the Hawaiian girl as a tourism draw, the fetishization of black women’s behinds, and more hot Latinas here and here. var [...]

I was in Hawaii about 8 years ago. I loved it. I came back, and there was an ad with a dancing Hula girl in it and you could leave a note saying something in Hawaiian and email it to someone. I wonder what happened to it? It was lovely and I miss it not being there for people

I was browsing through the Sociological Images entries, and caught sight of a link back to this entry. I thought I'd share a relevant book that profoundly influenced the course of my own academic career. Native Hawaiian leader, educator, and activist Haunani Kay-Track published a collection of her essays and speeches entitled From a Native Daughter. In this collection she provides powerful pieces about the appropriation and exploitation of Hawaiians and their culture, the damage of tourism to the Islands, the systematic oppression of Hawaiians, and world-wide native sovereignty facing American/Western imperialism in an era of neo-colonialism. Trask's book has the profound effect of opening important intellectual doors that are firmly locked in most of academia.

I apologize for a misspelling in my above comment, the name should be Haunani Kay-Trask. If only I would have paused to proofread :)

Confused by this post...can you share your source for the infomation you used?

I'd date the meme back to the reports of James Cook's stay in Tahiti in 1769.

There is a lot wrong with this article... Your general idea (that the culture is appropriated and commodified) is spot-on, but your analysis of the hula is pretty far off from what is actually going on here.

I would love to guest blog on this topic. I'm graduating from UH Manoa in a month with undergraduate degrees in English and ethnic studies.

Is the hula really not authentic? I'm from NZ, and I've often wondered why all the other pacific islands seem to have sexy dances (for both me and women), but Kapa Haka, while awesome, is decidedly unsensual...

Love it! I also love when disciplines cross over. I studied the EXACT SAME THING, racial and sexual objectification and the allure of the Other in art history. The examples in art go all the way up to the likes of ingres and "The Grand Odalisque."

Pretty lazy article. I think what it comes down to is the author shouldn't have written this. She should have left it up to a Hawaiian person, an insider, to take on the topic.

I mean, I agree with certain things about the article, including the main premise that women have been objectified. But, the author assumes that Hawaiian people had no agency at all during the early Western contact period. There were aspects that were embraced absolutely, including Christianity.

Thank you Dr. Wade, but you do not need to speak for Na Kanaka Maoli.

I have to agree with several of the reservations listed below. Having lived in Hawaii, I can say that though hula has very much been misused in many tourist venues/advertisements, it still has deep and valued roots among native Hawaiians and others who have grown up on the islands. Many of its current expressions are far removed from the sensual, superficial stuff of dashboard hula girls.

As I understand it the grass skirt started in Tahiti, not Hawaii. And some dances chants were very explicit then the missionaries changed the hula more to the style we see today in an effort to tone it down. I could be wrong too but that's the version I heard.

I disagree with the writer regarding the practice of ura/hula/ori being solely a colonial invention. I totally agree with the writer in that the focus on only a tiny aspect of ura/hula/ori uses a colonial lens. But there is a difference. The writers logic is flawed. It is like saying that fried rice is not a traditional Chinese food. Therefore, rice is not essentially part of a Chinese diet. Of course it is. But the focus on one style of rice dish excludes sight of everything else. In terms of the sexualisation of young Polynesian females, this continues to the modern time and it is disturbing. But then again, aren't all young females of every race sexualised in this time? Colonisation actually sought to hide the Polynesian body, which when not subject to a processed diet and sedentary lifestyle, is a physically beautiful gene pool.