Cultural Messages in a Safer Sex Pamphlet for Transmen

The representation of sexuality and safer sex in public health campaigns is fascinating given our simultaneous cultural obsession with yet pathologization of sexual behavior.  Safer sex campaigns and materials not only seek to increase prevention behaviors but also produce a range of social meanings surrounding gender, bodies, and desire.  Most are produced by organizations that fall well within the mainstream; others are not.  This post is about one of the latter (warning: sexual explicitness).

The following resource, titled “Top 5 Reasons to Fuck a Transguy” was produced and distributed by a collaborative project of the San Francisco-based Asian and Pacific Islander Wellness Center.  tm4m is a group for transgender men whose goal is to “provide information, education and support to transmen who have sex with men (both other transguys and cisguys).” 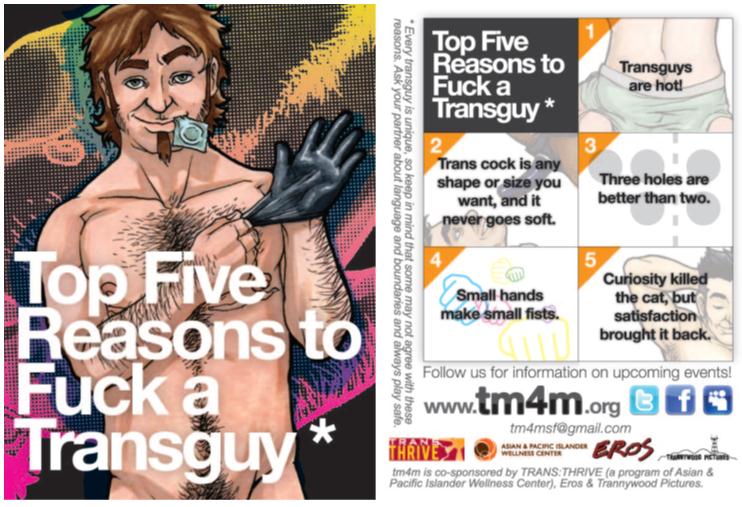 This material is interesting for two main reasons.  First, it combines traditional health education with an erotic, sex-positive context that is missing from most public health campaigns.  For the most part, public health approaches to HIV prevention and sexual health promotion utilize a “sex-negative” approach to sexual behavior; in other words, sex is represented as potentially dangerous or problematic and focus narrowly focused on its negative aspects, such as disease transmission.  Even more progressive “comprehensive” approaches to sexual health education (that is, approaches that do not focus solely on abstinence) tend to center on the potentially dangerous outcomes of sex and how to prevent them while ignoring the pleasurable and fun aspects of sexuality.

In contrast, “5 Reasons to Fuck a Transguy” depicts a naked transman with safer sex barriers (condom and a glove) and uses explicit language (“fuck” instead of “sex” and “cock” instead of “penis”) and imagery.  For example, in reason #2 we see two people about to engage in strap-on play and in #5 we see a guy that appears to be receiving oral sex or relaxing in a state of post-sex ecstasy.  This sort of language and imagery is absent from the vast majority of sexual health promotion materials aimed at a wide variety of populations.  Thus, in “5 Reasons to Fuck a Transguy,” safer sex is not presented as distinct and separate from sexual pleasure.

Second, the material uses an embodied approach to highlight differences between trans and cisgender men while at the same time eroticizing that difference.  Starting with reason #1 (“trans guys are hot”) we are invited to see the transmale body as the object of desire.  Reasons #2, #3, and #4 call attention to the physical differences between cisgender and transgender male bodies and eroticizes the latter by emphasizing interchangeable cock sizes, more holes to penetrate, and smaller hands for fisting (or using the whole hand for penetration).  Finally, reason #5 alludes to a fetishization of transmen: the transgender body incites curiosity that will ultimately pay off in enhanced pleasure.

Just because I don’t have my own natural cock doesn’t make me this insane sex toy thing that’s such an anomaly and such a fetish object and so very very strange and different.

So, despite the disclaimer that “every transguy is unique,” some viewers saw the material’s approach as a problemtic eroticization of their bodies and gender.

In sum, “5 Reasons to Fuck a Transguy” moves beyond typical sexual health promotion approaches to include desire and pleasure, but doesn’t avoid the problem of sending its own cultural messages about gender, bodies, and desire, ones that may be problematic from an entirely different point of view.

Christie Barcelos is a doctoral candidate in Public Health/Community Health Education at the University of Massachusetts Amherst.

That image on the right rather reads like "5 reasons to be a creepy, fetishizing, othering trans-chaser!" The species, uh, tends to annoy trans men.

Imagine if there were a pamphlet like this for women. Top Five Reasons to Fuck a Blackwoman:
1. Blackwomen are hot!
2. Blackwomen make their own lubricant so you won't need any.
3. Three holes are better than two.
4. Small hands make small fists.
5. Curiosity killed the cat but satisfaction brought it back.

Pretty creepy, huh? The list assumes that trans men (put in a space please) are some kind of unified class of sexy. Um, no. That "trans cock" is a sex toy, and not the biological cock trans men might choose to use. Some of us have had surgery and can't really change our size. Some of us haven't had surgery and don't use sex toys. Not all people are going to let you put things in all their holes, or any! Also, small hands? What the fuck? My hands are bigger than a lot of men I know.

I don't even know what five is supposed to say except that trans men are a weird unique creature that is initially a boner-killer but then, once we fuck with all our holes and attachments, you'll be satisfied.

This stuff should get a lot more criticism here than you've given it. Assuming there is some kind of uniform difference between transgender and cisgender bodies capable of being eroticized? Seriously, back up a minute.

This kind of stuff aimed at fetishizers of trans women is creepy and I hope wouldn't appear here with such glowing praise.

I found this to be particularly creepy. As another commenter mentioned, this borders on fetishizing. Reading through, I became offended and embarrassed because my boyfriend is a trans man. It pains me to think that he would be viewed in such a vulgar way.
I think that informing the public about safe sex is important, but there are more tasteful ways to do it.

This pamphlet comes with a similar sheet that gives 5 reasons to fuck a non-trans guy (maybe even on the reverse?) - I think this is really important because it attempts to destabilize the focus on trans as other, whether or not one finds that attempt successful. The text that comes along with the pamphlets also points out that all trans men and all non-trans men are unique, which kind of problematizes the idea that you could put together reasons to fuck a trans/non-trans man.

Honestly, I find this fetishizing and creepy. I get that whoever made it was trying to be sex positive, but this is /not/ the way to go about doing that.

While reading the pamphlet, my brain was comparing what was being listed to what I was comfortable doing. And my anxiety level just kept rising. So, I guess the nonverbal fight or flight thumbs down on this campaign is this transguy's critique. Sorry! :( And hell, with the right partner I'd be down for whatever. Just geez don't make a commercial out of it. X__X