Re-posted to add to the discussion about sexual assault in the aftermath of the Steubenville rape trial, the Senate hearing on rape and harassment in the military, and the controversy at Occidental College.

This screenshot of the front page of The Sun is an excellent example of the eroticization of violence against women and our insistent denial of it: 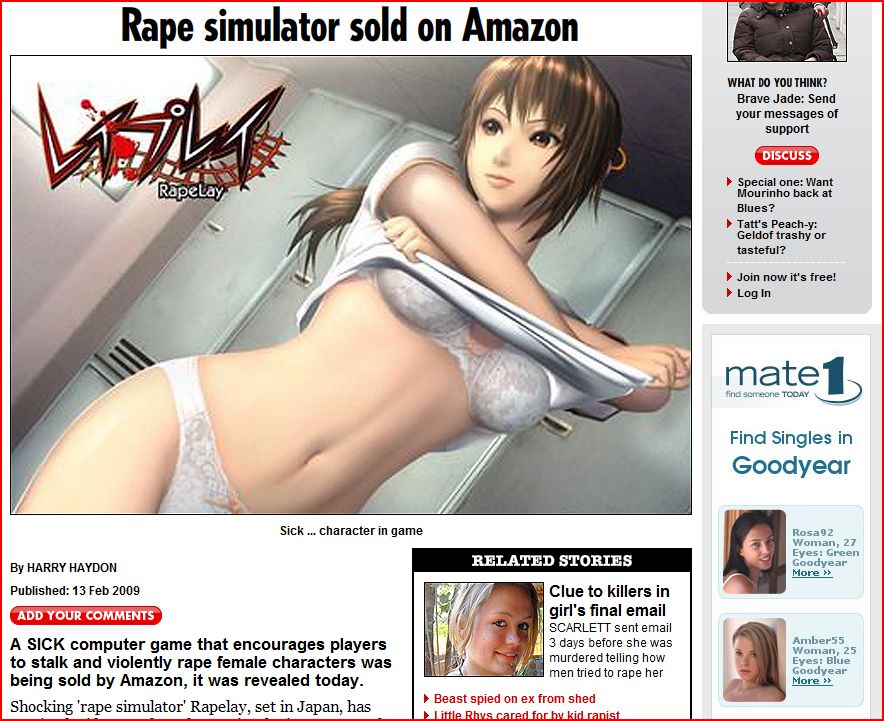 The article is a condemnation of a video game in which the goal is to rape a mother and her two daughters (and force them to have abortions if they get pregnant).   They call the game “sick” and “shocking,” but also include a huge picture of the virtual rape victim sexily stripping down to her underwear.  Twisty, at I Blame the Patriarchy, observes that “…in terms of screen real estate, titillating images take up more space on the Sun’s web page than actual copy…”

Notice, also, the “related story” about a girl murdered who had reported rape threats and then, to the right of that, a dating advertisement featuring a couple of girls making bedroom eyes at the viewer.

This is what rape culture looks like: a story about a video game that encourages players to rape and otherwise torture women and girls, alongside titillating images from that very game; a story about a “girl” who had actually been murdered, alongside a photo of her looking invitingly into the camera; and a dating website.  With this material like this, we learn that sex, violence, and women aren’t separate concepts.  Instead of learning to think about sex, violence, and women, we learn to think about, and fantasize about, sexviolencewomen.

The fact that the article is accompanied by such titillating screenshots of the game makes me question the honesty of the photo captions and the article's critique.

The Sun always CAPITALIZE certain words, as if they really want to DRIVE the point home. The more POWERFUL a word is, the more likely. But using such simple means to catch the reader's attention isn't exactly surprising, coming from the tabloid that invented the "page three girls" who frequently show both TITS and ASS.

Ok, I'm dripping sarcasm here, but this just seems so damn stupid on every possible layer that I don't know what to say. So I'm just venting my hatred against The Sun and similar lowest-common-denominator tabloids.

So... is the character what is sick, or the game? What a mind-bogglingly inept caption.

It's just like the old Monty Python sketch where a guy with a "TV" (actually a box with a TV shaped hole) shows up to a house and offers to show the couple who live there a documentary on BBC 2 on mollusks, or something like that. It starts off dry, and the couple begin to complain that they're bored, and try to change the channel.

The guy who came over (actually the narrator of the "TV show") reacts, and decides to start talking about the sex lives of mollusks, going into hermaphroditic species and so on. The couple act deeply offended and say that BBC shouldn't show such things, but neither of them want to change the channel, showing their true feelings.

I think it was made in response to the protests in Britain about some of the racier content on BBC, and it was making the general point that people still were watching the shows, even if they were offensive, and that it might say more about the Britons than the BBC. Still, rape culture is much more disturbing and deplorable than what the BBC started to show in the 70's.

Yes, but is the game even real? I point to this commentary on the Skepchick website. http://skepchick.org/blog/?p=5994

Given the quality of the Sun as a paper, and the fact that no one outside of that establishment seems to have had any experience playing the game, I have to question if it really represents rape culture, or if they were trying to drum up a scandal to sell papers.

"Yes, but is the game even real?"
I'm pretty sure it's a real (Japanese) game. iirc, a third-party seller put it on Amazon...

It is real. The game has this thing that if you get one of the girls pregnant and fail to get an abortion, after a while the pregnant woman will toss you in front of a moving train and you get game over. There was a review for that game on Something Awful.

"Related Articles" and the ads that accompany a page are usually automatically generated rather intentionally put there, so mentioning them only points out the result of computers not being able to fully figure out the appropriate context - or sometimes to do it all to well.

Sociological Images » Reproducing Gender And Race Stereotypes in RuneScape — May 11, 2009

[...] more examples of race and gender stereotypes in video and online games, see here, here, here, here, and here. tags: gender, race/ethnicity| Permalink| What Does The [...]

[...] highlighted instances in which contradictions in U.S. culture become glaringly clear.  In one, suggestive advertising accompanies an article critiquing a video game in which the player rapes a wo....  In another, CNN asks whether Jon and Kate Gosselin are getting too much media coverage, and then [...]

I'm a bit late on this, but... It actually doesn't matter at all whether the game was real. The Sun's cover, taken as a whole, is still a horrifying example of rape culture all on it's own. It's not the game itself that this page is making commentary on, it's the Sun itself. Reread the article.

Alternative title: "This is What The Sun Looks Like."

Many American readers are probably unfamiliar with this Murdoch tabloid, whose only consistent features are conservative bias and prominent placement of pornographic snaps of bare-breasted women on Page 3. The juxtaposition of sleazy prurience and sensationalist outrage are precisely what the paper's brand is built on; in the world of periodicals it has more in common with Penthouse than with The New York Times or The Guardian.

The popularity of the tabloid does say something, I suppose, but I'd hesitate to take any bit of content from The Sun as a representative example of the "culture" beyond the gates of the Murdoch empire. What the image and the ensuing commentary tell me, more than anything, is that shock and titillation are unfailingly effective ways to get people's attention, especially when put together.

I've done research on this game to talk about sex and games that depitcting sex in a horrible way. This game is shit. What makes it worse is that there is a 12 year old girl. .You make her into your little sex slave and you molest her over and over. Its horrible. Its bad enough you attack a mother and another girl. All three are family. You have a revenge plot against them. Its worse after worse. This game DESERVES to be shunned and banned.

What's even more scarier is I saw lots of gamers WANTING more of this. What has our culture become?

So if something is shown in a game or a film, it is automatically encouraging the viewer to accept and imitate what is shown?
Sorry if I think that is the stupidest attitude towards any media.

[...] away”) or even the victim’s “guilt” when these incidents occur within a rape culture.  I see it as the missing complement to understanding social problems sociologically — that [...]

I Think Other Site Proprietors Should Take This Site As An Model, Very Clean And Excellent User Friendly Style And Design, Let Alone The Content. judi online mantap asia You're An Expert In This Topic!