Demographics and the Future of the GOP

Jeb Bush told CPAC that the Republican party had an image problem.

Way too many people believe that Republicans are anti-immigrant, anti-woman, anti-science, anti-gay, anti-worker.

People have good reason to believe those things.  But the “way too many” suggests that the GOP’s problem is not image or brand, it’s demography.  For five years or longer, the Republican faithful have been complaining that “their” country was being taken away from them, and they were going to take it back (e.g., see my “Repo Men” post).

They were right.  Their country, a country dominated by older white men, is fading in the demographic tide.  The groups whose numbers in the electorate are on the rise don’t look like them.  Andrew Gelman (here) recently published these graphs as an update to his 2009 Red State, Blue State.  They reveal the tendency for different groups to vote more Democratic (blue) and Republican (red): 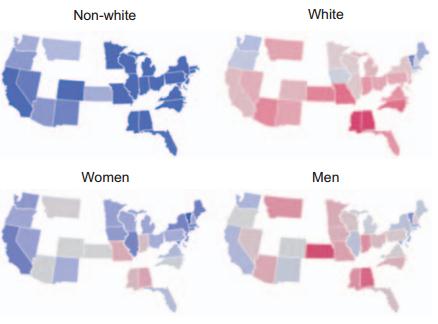 (The exit poll the data are based on sampled only in the 30 most competitive state. Texas and Georgia are large, and they have significant non-White populations. But demographic changes there are unlikely to have much effect on which party gets their electoral votes.)

Unfortunately for the GOP, the non-White proportion of the electorate will continue to grow. The female proportion may also increase, especially as education levels of women rise (more educated people are more likely to vote than are the less educated).

The key factor is party loyalty.  And, at least in presidential elections, people do remain loyal. I think I once read, “If you can get them for two consecutive elections, you’ve got them for life.”  Or words to that effect.  If that’s true, the age patterns of the last two elections should be what the Republicans are worrying about. 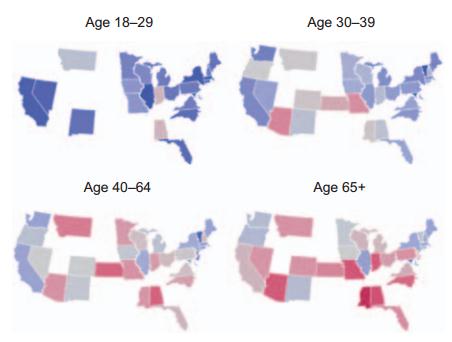 Trying to make themselves more attractive to younger people will not be easy.  Oldsmobile tried it not so long ago (a post on that campaign is here).  “This is not your father’s GOP” might have similar lack of success.  But insisting that this is still your father’s GOP (or more accurately, some white dude’s father’s GOP) seems like a formula for failure.

Texas is quickly becoming a state where Latin@s are the largest demographic, and I doubt that they will be keen to vote for the party that actively campaigns against "amnesty" and uses fear of immigrants as a way to drum up their base

The problem with this argument is that Livingston seems to think it's a forgone conclusion that white Democrats will stay Democrats as the demographics change. I don't see any reason why we should expect that. A recent Wash Post article suggests that race can trump party loyalty.

Further, up to this point, Whites have had the "privilege" of being able to pick between two parties whereas other racial groups have found that in order to best express their interests they've needed to consolidate their vote behind one party. As whites fall in numbers, I don't see why whites wouldn't do the same. The parties have morphed many times over the decades in US politics, after all, with different demos moving from one to the other.

If voting as a racially conscious bloc becomes just as important or more important as other issues for whites (as it is for other groups) then whites could easily win elections for a long time to come on the national level by simply moving to the GOP. In fact, it wouldn't take very many whites to move to the GOP for this to happen. Much is made of how Romney lost because he got so few hispanic voters, but the thing is, he would have won easily if he'd gotten, say, 5% more white voters. He didn't even need that many.

[...] Demographics and the Future of the GOP — Jeb Bush told CPAC that the Republican party had an image problem. “Way too many people believe that Republicans are anti-immigrant, anti-woman, anti-science, anti-gay, anti-worker.” People have good reason to believe those things. But the “way too many” suggests that the GOP’s problem is not image or brand, it’s demography. Well, duh. The GOP has gone to a lot of trouble to brand itself as anti-immigrant, anti-woman, anti-science, anti-gay, and anti-worker. Why are they surprised? [...]

...looking forward to an intelligent conservative movement so we can all get back to the center. Today's talking heads are depressing.