Forgetting We’re at War: The Gap between U.S. Civilians and the Military

How many Americans think about the war in Afghanistan regularly? The daily realities of war are inescapable for military members and their families, but the rest are largely able to stay disconnected from it. The issues of foreign policy and war dropped off the radar entirely for most Americans before the 2012 election.

About 68,000 U.S. troops are still deployed in Afghanistan, down from the peak of 101,000 (not to mention the those who were in Iraq). Without a draft, WWII-style war bond campaigns, or highly visible war industry, most Americans need to be reminded that we’re at war.  Unlike veterans and military families, civilians not directly connected to the military have a kind of privilege to forget the conflict in their daily lives. The result is a growing chasm between U.S. civilians and the Armed Forces.

In 2011, the Pew Research Center surveyed Americans about their connections to the military and found a considerable gap: “Never has the U.S. public been so separate, so removed, so isolated from the people it pays to protect it.” The vast majority of those over 50 had an immediate family member who had served (mostly due to WWII and Vietnam). Of those 30-49 years old, 57%  had someone in their immediate family serve. Those between 18-29 are the most disconnected from war; only 33% have a close family member with military experience: 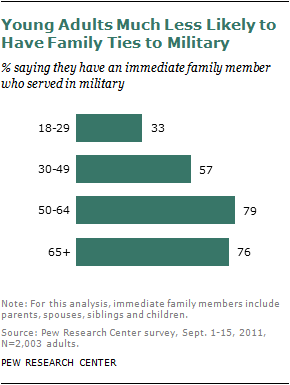 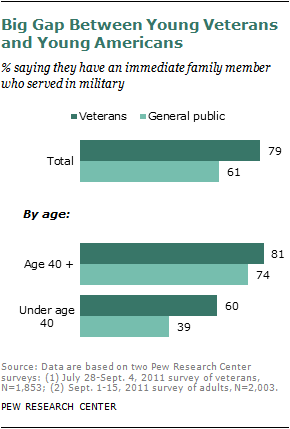 This leads to differences in views about the military. Those from military families are more likely to believe that civilians do not understand what they go through, that the U.S. “is the greatest country in the world,” and that they are “more patriotic than most people in the country.” They’re also more likely to recommend the armed forces to a young person — though only about half would do so: 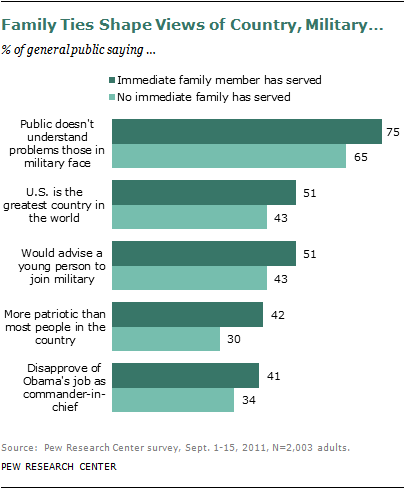 My own research on the experiences of military families during deployment supports the Pew findings. And patterns in who joins the armed forces may lead to an increased gap. Those with veterans in their family are more likely to join the military; 79% of young veterans, compared to 61% of the public, have family members who served. As fewer Americans have relatives who were in the military, making them less likely to join themselves, insulation from the military grows.

This bumper sticker reflects this gap between military families and everyone else. It draws a distinction between “my” service member and “your” freedom, while seeming to assume a lack of support from non-military Americans:

Military families believe that others don’t understand what they go through during deployment. As one mother told me, “We understand why we try to be strong but automatically cry when we see the foot powder display at Wal-Mart.” Or as an Iraq war veteran explained to Time,

The gap between the military and everybody else is getting worse because people don’t know–and don’t want to know–what you’ve been through…There are no bond drives. There are no tax hikes. There are no food drives or rubber drives … It’s hard not to think of my war as a bizarre camping trip that no one else went on.

Veterans return to a country where very few understand what they have been through, which makes reentry into civilian life more difficult — just one of the consequences of having a small segment of the country assume the burdens of war.

Wendy Christensen is an Assistant Professor at William Paterson University whose specialty includes the intersection of gender, war, and the media.

"one of the consequences of having a small segment of the country assume the burdens of war."

I never get this. It almost seems like people are calling for meaningless bond or rubber drives just to get non-military Americans "involved" in the process. "Bush never called on us to make any sacrifices!" Well, were any sacrifices actually needed by most of us?

We needed a huge army to defeat Germany and Japan. Who really thinks we need a draft to give us enough troops for the current conflicts?

Fine, let's do this. Unlike veterans and those “patriotic” military families, some of us chose not to serve in the military because of our current politics and leaders (our glorious, fearless leaders who bravely answered the call and shed blood in the field of battle -Clinton, Cheney, Bush- and their reasons for sending others to fight). Dying for nothing (Vietnam) is bad enough, but dying for a lie (Iraq and its “nucular” weapons of mass destruction) is even worse. When I finished school I thought for a while about signing up, but now I'm glad I didn't. What's the point of all that stuff about honor and duty? Many soldiers return home as mental cases not only because of what they've seen, but because of what they've done. There are thousands and thousands roaming the streets and in the criminal system. Sure, if you're in Fallujah or somewhere and someone's shooting at you, then you shoot back. But the fact that you're there AT ALL probably means that: 1) you chose to join the military and therefore 2) by your presence and service you do not question the people who tell the military what to do. In the end you do what your conscience (if you have one) tells you to do: “-Man, I ain't got no quarrel with them Vietcong”. If an invading force landed on our shores -that's how they did it in the old days- then that's different. I wish our military didn't have so much innocent blood on its hands, because it has the potential to do good. Until then, no way I'm supporting those people.

That bumper sticker makes me feel physically ill. "Your brother" does not fight for my freedom, fight with my permission, or fight in my name. Yes, I feel a sense of disconnection from the US military, and I often forget that they are waging war. Partly, this is willful denial on my part because I feel helpless to change anything. Trying to justify the murders you commit or enable with your military service by pretending it has anything to do with me or my "freedoms" is disgusting.

"Who really thinks we need a draft to give us enough troops for the current conflicts?"

to be clear: the US government did away with the draft because the incidence of resistance from within the military was increasing in dangerous ways toward the end of the Vietnam War, ask anyone in Vets for Peace who served during that era about where and when they became radicalized. My vet friend used to repeat that every time he heard someone in George Bush (Sr)'s administration say, "No more Viet Nams" in  the build-up to the first Gulf War - the one that started in 1991 and went seamlessly into the second Gulf War with the help of the Clinton Admin.
Instead we've instituted an economic draft, and the statistics above - while interesting on their own - would be even more interesting if they were compared to economic information about the respondents as well

They don't protect me, I don't want to pay them, and I didn't ask them to do anything for me. They are no better or worse as a group then anyone else, deserve no special treatment, and need to stop bothering people by begging for respect.

The military is full of job opportunities, but right now that's all it is; a rather shitty job. They aren't protecting anything, they're pulling in a paycheck. Maybe they "deserve" only the same amount of respect that any employed person deserves.

While I certainly don't agree or condone the us vs. them division of those who have military family and those who don't, and the hostility it inspires, I get it. Try being part of a liberal and intellectual community and tell people the only reason you didn't go into the military is because your eyesight caused you to be turned away. Or that you can name more living families members who are vets or active duty than you have fingers. Or that you think it's a great community with lots of opportunity. Try not to be judged as overly sensitive when you have to leave during movies that show war scenes because you can't stop thinking about your close family members in those situations, fighting for their lives and possibly dieing.

The military has problems as it's currently run, yes. But a lot of those problems might be easier to solve if more intellectual and liberal people joined instead of standing outside and criticizing it.

Personally, after 2 years in the military community (husband is in the Air Force), I believe that the difference in military family opinion vs general public opinions has a lot to do with the type of people who are volunteering for military service. The majority of military members and their families come from small towns, from poorer backgrounds, and from traditionally red states. Thus, you have a group of people who are already uber patriotic, anti-Obama, " GOD BLESS AMUUUURICA, HERP DERP!!", etc. So I don't really feel it's the connection to military that shifts opinions as much as those who have these more Republican opinions are more likely to join/have military family members.

Also, funny note about the bumper sticker: I know a lot of military members who hate going outside in uniform because people thank them for their service and they find it super awkward and uncomfortable (my husband won't even go to the grocery store after work...). Many of them would prefer just being treated like any other person. Their families, on the other hand, seems to lavish in the special treatment (don't get me started on military spouses and special treatment...too much frustration >.<). That bumper sticker is just someone trying to make themselves special through connections- it's kinda pathetic.

[…] standards, the bill states many laws that some veterans believe that the federal government is lacking in. a potential non-monetary cost to many veterans is the feeling of no value so self-esteem when they […]