Cross-posted at Racialicious and Family Inequality.

Trying to summarize a few historical trends for the last half century, I thought of framing them in terms of diversity.

There are various ways of constructing a diversity index, but I use the one sometimes called the Blau index, which is easy to calculate and has a nice interpretation: the probability that two randomly selected individuals are from different groups.

Take religion. According to the 2001 census of India, this was the religious breakdown of the population: 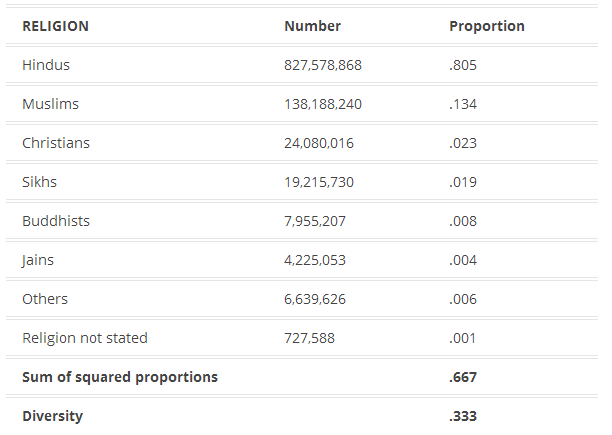 Diversity is calculated by summing the squares of the proportions in each category, and subtracting the sum from 1. So in India in 2001, if you picked two people at random, you had a 1/3 chance of getting people with different religions (as measured by the census).

Is .33 a lot of religious diversity? Not really, it turns out. I was surprised to read on the cover of this book by a Harvard professor that the United States is “the world’s most religiously diverse nation.” When I flipped through the book, though, I was disappointed to see it doesn’t actually talk much about other countries, and does not seem to offer the systematic comparison necessary to make such a claim.

With our diversity index, it’s not hard to compare religious diversity across 52 countries using data from World Values Survey, with this result: 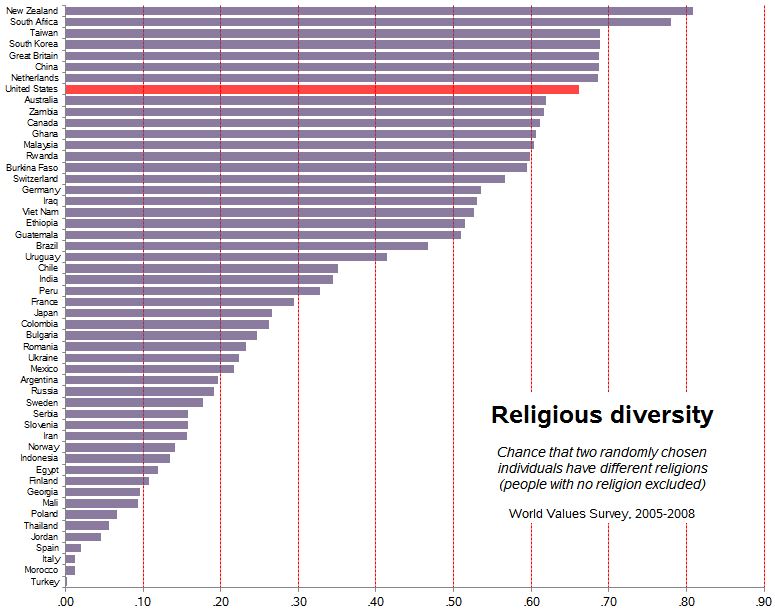 Anyway, back to describing the last half century in the U.S. On four important measures I’ve got easy-to-identify increasing diversity: 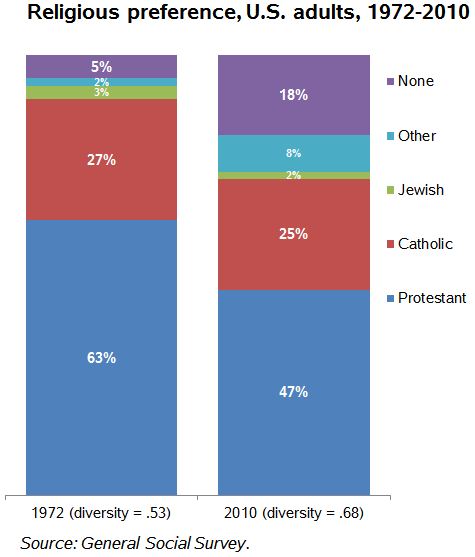 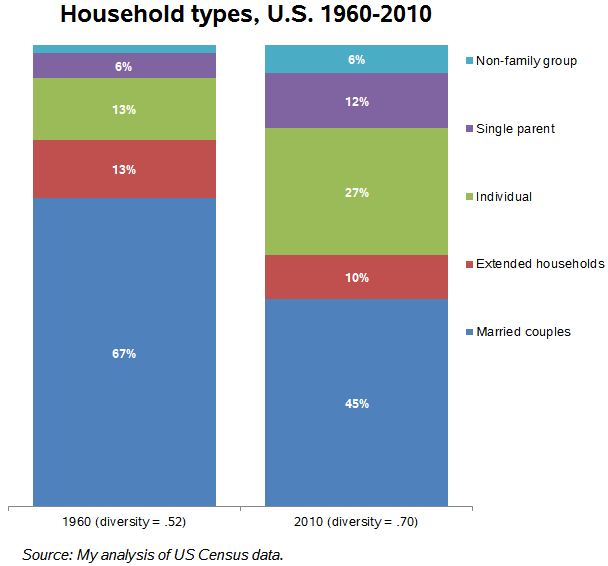 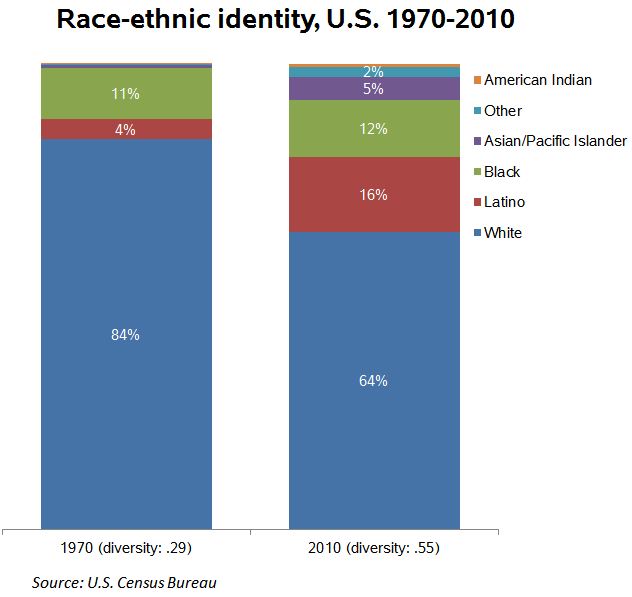 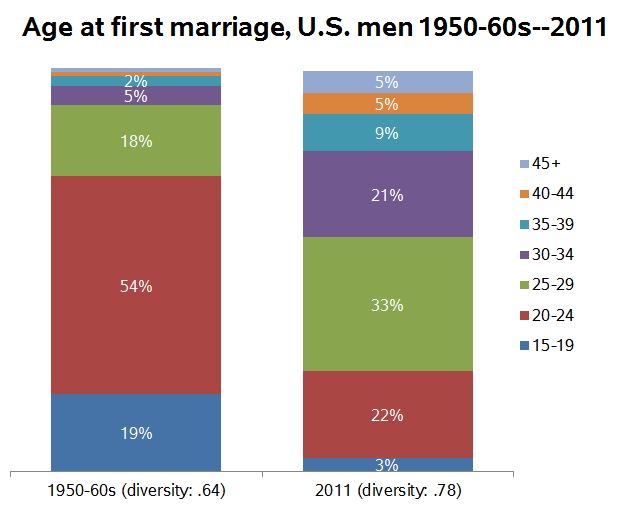 The last one is a little tricky. It’s common to report that the median age at marriage has increased since the 1950s (having fallen before the 1950s). But I realized it’s not just the average increasing, but the dispersion: More people marrying at different ages. So the experience of marriage is not just shifting rightward on the age distribution, but spreading out. Here’s another view of the same data: 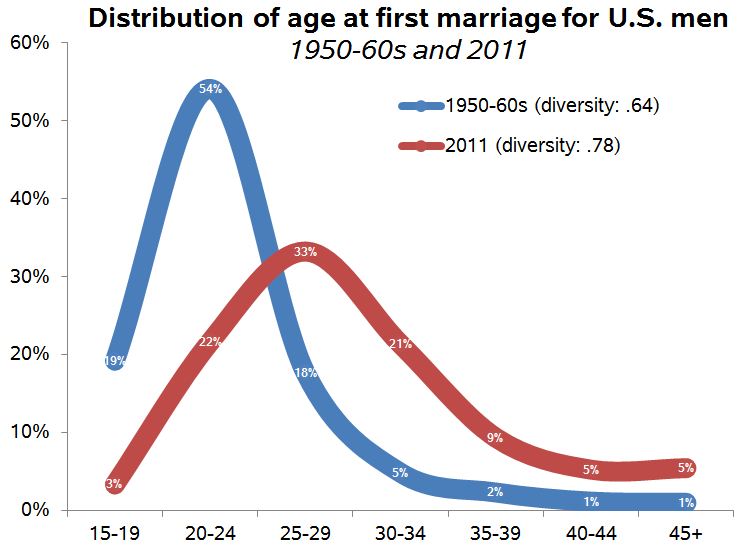 I have complained before that using the 1950s or thereabouts as a benchmark is misleading because it was an unusual period, marked by high conformity, especially with regard to family matters. But it is still the case that since then diversity on a number of important measures has increased. Over the period of several generations, in important ways the people we randomly encounter are more likely to be different from ourselves (and each other).

I'm mystified at the "people with no religion excluded" as that is a rather large fraction of many countries population.  I would think that would dramatically upset the rankings for many countries were they included.

I wonder at the religious diversity in China.  I know that in some Asian cultures, including most of China, people tend not to identify with a particular religion, but blend beliefs and practices from a number of different philosophies (for instance, in Japan, many people will go to a Shinto shrine for festivals, but rely on Buddhist priests for funerary rites).  Makes me wonder how the question was asked.

Using census data for household type will have you miss some multigenerational families living in "multifamily" dwelling units. This is the case in my family, and several others I know in areas where multifamily homes are readily available. My household is 3 generations under one roof - my inlaws, my husband & I, and our children. We owner occupy a whole up/down duplex. Technically, in the eyes of the census and a few other realms, we are two households since my inlaws' bedroom is in the part of the house with one address while my marital bed and children's beds are in the part of the building with another address. We sit together at the dinner table every night, do our laundry together, have a combined checking account for household bills... We are not living as two separate married households, but are counted as two. It annoys me that families like ours are falling through the data cracks.

[...] the past 50 years, the U.S. population has become increasingly diverse: According to the most recent census, 36% of the American population now identifies as non-Caucasian–that’s in comparison to [...]

The Changing Face of the All-American Model « DinaBina.com – Where Fashions Gets Their Diva — July 4, 2013

[...] the past 50 years, the U.S. population has become increasingly diverse: According to the most recent census, 36% of the American population now identifies as non-Caucasian–that’s in comparison to just [...]

[...] Over the past 50 years, the U.S. population has become increasingly diverse: According to the most recent census, 36% of the American population now identifies as non-Caucasian-that’s in comparison to just [...]

The Changing Face of the All-American Model | iToxicInfoiToxicInfo — July 8, 2013

[...] the past 50 years, the U.S. population has become increasingly diverse: According to the most recent census, 36% of the American population now identifies as non-Caucasian–that’s in comparison to just [...]

I think they should have included atheists in the graph of USA as well, it is same as religion, having no religion is their beliefs and should be included. I would like to see the graph after including these numbers in the mix.