Family Members in Need: Why Some Middle Class Blacks Can’t Get Ahead

The gap between the household wealth of Black and White families is massive.  Today the median wealth held by White households is 20 times that of Black households.  There are lots of reasons for this difference and a new study offers great data on one of them: the need to assist poor relatives.

Middle-income blacks are more than twice as likely as middle-income whites to have a poor sibling and more than four times as likely to have parents below the poverty line. And because of these relationships, they’re called upon more often to provide financial assistance.

Sociology graduate student Rourke O’Brien used data on spending and other financial patterns among Americans to test whether this is a significant source of the wealth gap (link).  He found that, at all but the most low income level, Black households are more likely than White households to give money to struggling relatives.  And the wealthier the Black household, the more likely they were to help others. 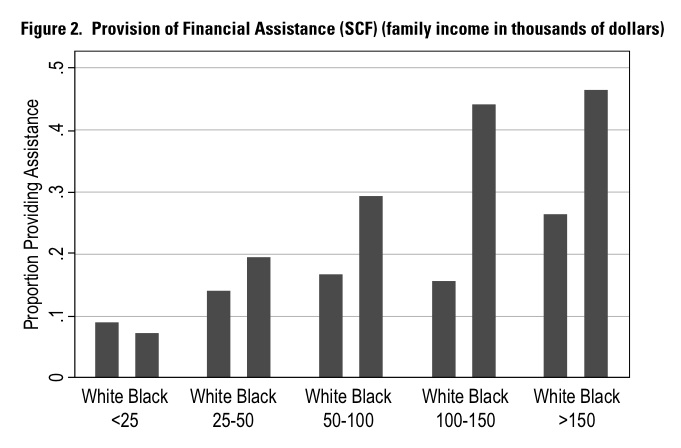 The lesson is simple, but all too often unnoticed.  Due to hundreds of years of enslavement and discrimination, African Americans are more likely to be poor than Whites. If you grow up poor then most of the people in your family are poor.  Accordingly, even if you “make it out” and arrive in the middle class (income-wise), you will likely be less financially secure than a person that earns the same income but came from a middle class family.  That person can put all of their extra money towards buying a home (and earning equity), retirement, additional degrees, starting a business, and sending their kids to college.

But the poor person who earns a middle-class income might use a significant portion of their income keeping their parents’ heat on, helping their little brother go to college, or buying back-to-school clothes for their nieces and nephews.  This makes it much harder for poor and working class people who become middle class to stay that way.  And the cycle continues.

Via Citings and Sightings.

inneresting. I notice that whites that make 50-100k are more likely to help than those that make 100-150k. I wonder if that first group is more likely to come from poverty than the the second group? And then it goes up again when you hit over 150k. Maybe that's the point when everyone (even people who are doing ok for themselves,) come with their hands out.

I'm a 50-100k white person and I certainly came from poverty. I pay some of my mother's bills and put money away for the future education of nieces and nephews. That's $500 a month that I could otherwise be saving or investing, but making things better for my family is worth it.

Mind you, I don't have children of my own - if I did that would probably change my priorities.

ETA: Sorry, this was meant to be a reply to myblackfriendsays' post.

The practice of financially supporting your extended family - or even your immediate family in relation to parents and siblings, rather than spouse and progeny - is as much an issue of culture as it is of poverty.  (I won't use ethnicity because it is often highly provincial, not exactly ethnic.)  You'll find poverty-stricken cultures where this kind of support is not common, not even really expected; you'll also find *comparably* well-off extended families from cultures where it is still a very common practice, and in some cases, practically a social mandate.

If a significant number of Americans who rose from poverty do indeed contribute far more to supporting their parents, siblings, and extended family than those who grew up in relative comfort, I would be very interested in learning what role culture plays in this.  Does it occur with all cultural groups, and can we speak of it as an American cultural trait?  And is there an aspect to it that specifically relates to black culture in America?  It leads into great discussions about American cultural identity(s).  For example, can we speak of a unified black culture where this would occur even without widespread poverty? Also, can we speak of relatives financially supporting their less privileged relatives and how this affects both giver and recipient, but leave racial/ethnic/religious/etc. cultural facets out of the discussion?

Presumably most families in this country of all races have a similar story to tell - starting from nothing (or very little) and then slowly, from generation to generation, helping each other out and passing stuff on, getting ahead a little and acquiring some real wealth.

I guess my question is, is there something unique and different about how blacks are experiencing this process that is different from other racial groups?

The graph is not a particularly useful illustration of the point this post is supposed to make. It shows that black households at nearly all income levels are more likely to provide assistance to family members than white households, but it doesn't say *how much.* I could imagine that wealthy households might provide levels of assistance that do not dent their savings accounts too much.

Is there a thriving black middle class ANYWHERE on planet earth?
Has there ever been?

Even these kinds of "studies" begin with a starting point under the tacit acknowledgement that there is a severe productivity/achievement gap, and that this specific group of people consistently fall short of every other racial group, no matter if that is in their native lands, first world host countries, or anywhere in between.

Why not ask some serious questions and conduct some serious inquiries rather than assume that the dysfunction that results from concentrations of these people are some kind of institutional impediment?

They come from a stock of people who never invented the wheel, never developed a calender, never built architecture over one story, never learned to smelt mined metals in spite of living on the most resource rich continent on the planet, never domesticated the dog, never developed a written language, etc... and consistently score 15-40 points lower on IQ tests than Asians and Caucasians.

But it is too politically incorrect to examine black dysfunction with that as a starting point isn't it?

Lisa, have you ever met any negroes?

They've spent over $1.5 TRILLION on social spending since Johnson's "Great Society" to bring blacks up to white levels and they are further behind than ever. You can't fix stupid, and the average black is pretty damn lazy and stupid. Blacks don't get ahead because by and large, they can't!

There are a few who do get ahead, but they are the Bell Curve exceptions!

[...] not so much the dominance of whiteness but the subjugation of blackness.  It is a consequence of cycles of poverty and the criminal justice system, and of active decisions made over [...]

They can't get ahead because...

Family Members in Need: Why Some Middle Class Blacks Can’t Get Ahead | THE MILWAUKEE DRUM — November 12, 2013

I think most of the upper blue collar whites (I am one) help out their families also. I help out my parents, brothers, and now a niece and her baby. I would much rather be able to pay off my mortgage early and put the money aside, but I can not turn my back. What I have seen is that people with money can make mistakes and get through it. People with little money will be taken down by the same mistake because they do not have the resources to make it through. It is a bitch, and I do know that there is nothing noble about poverty. Black or white, having to take care of multiple people and generations will wear you down. I wish my family would learn about how to plan and realize that all actions have consequences. If you can not afford to raise a child, please don't have one. It is not fair to the child. In today's world, if you can not get an education, you are screwed to a job where you will never make much more than to survive. Life sucks and then you die.

There are many avenues to take when it comes to family members in need. Your first and the best course of action is to have a sit down with them as https://www.paperwritingpro.com/ explains, find out what they really need, and figure out how you can help them meet that need.