The figure below — from the New York Times — features Western and Northern Europe and the Americas (in turquoise), Asia and the Pacific Islands (in pink), and the Middle East and Eastern and Southern Europe (in yellow).  The line down the middle separates societies in which boys scored higher than girls (left) and vice versa (right). 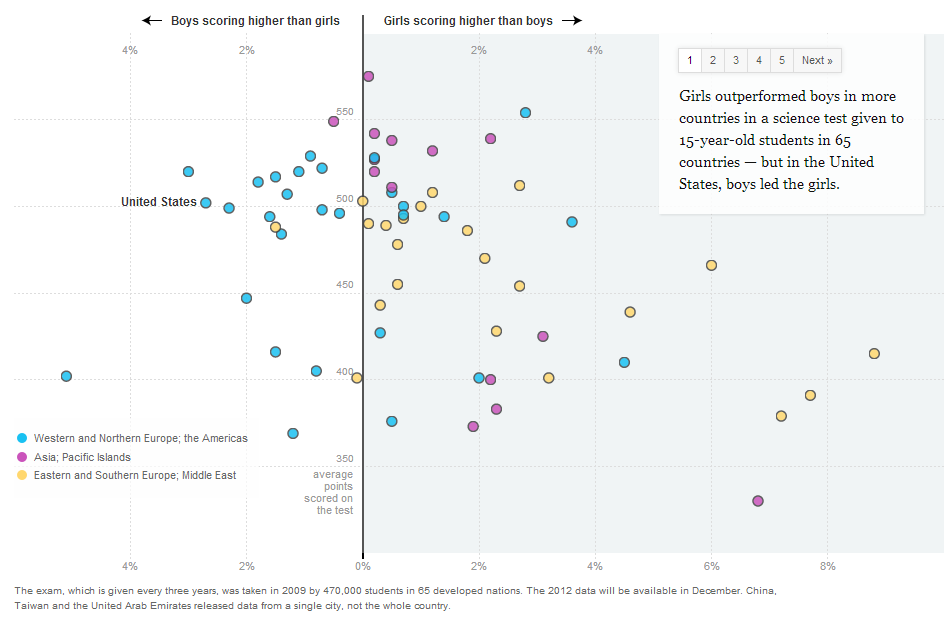 Notice that the countries in which boys outscore girls are overwhelmingly Western and Northern Europe and the Americas.

This data tells a similar story to the data on gender and math aptitude.  Boys used to outperform girls in math in the U.S., but no longer.  And if you look transnationally, cultural variation swamps gender differences.  Analyses have shown that boys outperforming girls in math is strongly correlated with the degree of inequality in any given society.

One lesson to take is this: any given society is just one data point and can’t be counted on to tell the whole story.

Via The Global Sociology Blog.

I really like seeing this kind of data, but it's pretty weird data viz to put northern Europe, North America, AND South America together into one color category, and then East/South Europe and Middle East into another color category.
"Analyses have shown that boys outperforming girls in math is strongly correlated with the degree of inequality in any given society." Do you have links to these analyses?

Indeed weird groupping of countries. On the one hand, countries like Russia, Hungary or the Baltics (where the Soviet attitude towards mathematics and women in MINT might still have an influence); on the other, countries like Yemen, where many girls don't even go to school.

Is Australia/NZ, two countries much similar in policies, gender attitudes, etc. to US/UK, part of the statistical "Asia/Pacific" region?

Re education in New Zealand, girls have been consistently out-performing boys at school for a number of years.  A good analysis of this can be found at: http://www.otago.ac.nz/christchurch/otago014782.pdf

This comes from data collected from a longitudinal study that has followed 1000 children from their entry into school until age 18.  There is ongoing discussion in education circles about the disadvantaging of boys in the current education system.

TRANSNATIONAL DATA ON GENDER AND SCIENCE APTITUDE | Welcome to the Doctor's Office — February 18, 2013

There is an interesting book on this subject http://www.amazon.com/Trouble-Boys-Surprising-Problems-Educators/dp/0307381293

Very weird groupings of countries.  I agree with other commenters, that seems manipulative.  There are a dozen ways to group countries that make sense, and this isn't one of them.  To me, it honestly seems like the countries are lumped together based on whoever's making the graph's personal opinions on culture, in addition to economic and geographical means.  The same point could be made if North America, South America, the Middle East, and Europe each had their own categories (whether or not Europe is divided).  Does Poland really have that much in common with Tunisia, but nothing in common with Germany?  And Germany has more in common with Brazil than it does with Poland?  And they don't even seem to stick many countries in the categories they're typically placed in; some of the Asian countries, I typically see referred to as the Middle East, and some countries I've mainly seen referred to as Eastern Europe are placed into the Western Europe category.  I think this skews the data to make an extreme point, where more accurate categories would make the same point to a less extreme level, and seems to erase certain, *ahem* not-quite-so-"Western" countries.  For example, combining South and Central America with Western Europe is used to make a point....specifically about Western Europe.  Both regions have similar trends, and of course, the US is left out of that slide, despite following the exact same trends as both Western Europe and South and Central America.  This could be a lead in to questions about how colonialism or Western European attitudes towards schooling affect gender equality towards test scores, but it just kind of compares Western Europe to Asia, and "tsk tsk"s at the United States, as if they US's score is particularly unique.  Why even include South America and the Middle East if the point of the study barely acknowledges them?

And of course, Africa is completely left out, and so is apparently Australia.  Because Australia may as well be England/Arkansas with a beach (depending on who you ask), and Africa doesn't even have any schools south or west of the parts that get hurriedly lumped into the "Middle East" category as if the lower population of black Africans has severed them from the landmass.  And there certainly aren't African countries with rising middle classes and levels of education, or gender equality issues that might be relevant to examine on a global scale....

These results are from OECD's Program for International Student Assessment (PISA), aren't they? If so, why don't you tell your readers?

I agree with your lesson. Here it would also be interesting to know more about the contents assessed? Science is very broad and I believe that there are sub topics where the gender differences might look different. However: pretty impressive and informative graphs!

It is false, in all the world men outperform women in science, the simpler proof of this is to look at the results of any Knowledge Olympiad.
Unfortunately only the International Mathematical Olympiad have the information about the sex of the participants. But not in the others, where it could be really very hard identify the sex of the contestant only by the name, not only because we are not familiar with these names, but because specially in Asia Pacific some names are used for the both sexes.

Women are more likely to live in poverty than men across all countries. The best cv websites are also less educated and have less access to health care. Representation for women varies widely from country to country, with countries.

This is so amazing and adorable post for all the new generation but there are web also very beneficial Competitive intelligence consultants available for giving you their best advice for starting your prospective businesses.

One thing missing in your blog is that you did not show about poverty, as this is one of the important topics and must be considered in your blog.

Orientation segregation has turned into a significant issue however web design company have generally spoken on the side of orientation fairness and consistently need a quiet society with next to no orientation separation.