On previous Valentine’s Days, we’ve featured vintage holiday cards caricaturing African Americans, Asian Americans, and American Indians.  This year I stumbled upon a card that draws upon stereotypes of the Scottish.

Though it has largely disappeared as a well-known stereotype, at one time in American/British history, the Scottish were stereotyped as cheap.  Accordingly, this 1932 Scotch-themed valentine boasts that it’s box of dates (a type of dried fruit) can last all year if “ye use them sparingly.” A great example of a bygone stereotype (I think): 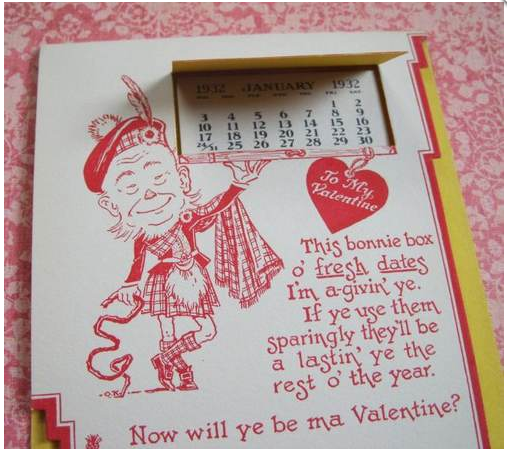 AFAIK, the stereotype is still there in the British memory, although it - like the memories of Empire - is slowly fading away. I don't doubt that some of this idea of "cheapness" is just the negative side of "frugality" that likely came about due stereotyping a group of people that had - for so many centuries - swung between country-men and enemies. Remember: England and Scotland warred against each other a LOT during their common history, both with armies and with politics.

Of course, the Scots also have other stereotypes associated with them, such as bravery, inventiveness, and (to a lesser degree) adventurousness. (And - AFAIK - these tend to be shown positively, as opposed to their negative counterparts.) Of course, all of these stereotypes have been used to put the Scots in their place; much like many colonialist imagery and myths are used to "properly" place people into their "correct" social strata. The same use of stereotyping has been done with the Welsh, the Irish, and the peoples of all the smaller British kingdoms that were taken over throughout British history.

There
are plenty of ethnic stereotypes that don't have the same trajectory on
both sides of the pond.  This is still a well-known stereotype in Europe. I've come across it a lot by people of various ethnicities.  And they weren't even referring to a specific Scottish person, but rather using the Scottish ethnicity as an expression for being stingy.  Also quite common is the "Scottish shower" (which is a real thing unrelated to being cheap) that is used as an expression for the tightening of one's purse strings.

That stereotype may have disappeared from American culture, but if you visit the UK you'd be unlikely to encounter anybody who isn't aware of it.

So this is something a Scott would use to self-stereotype?

As late as the 1970s, Safeway's in-house brand of groceries was called "Scotch Buy", and advertised with a jingle to (very roughly) the tune of "Loch Lomond".

My grandparents (b. 1898) definitely perpetuated this - they both had some Scottish ancestry and were frugal, and they referred to any incident of money-saving or non-spending involving themselves or others as Scottish, just like a Scotsman, etc.

I'm Scottish and we definitely still have this stereotype, mostly affectionate I think.

This is a pretty common stereotype in Australia. My step-dad uses the simile "tight as a scotchmans' wallet" semi-regularily.

It's surprisingly prevalent in Sweden, with a whole genre of "scottish jokes", dozens and dozens of them, that are still frequent in at least older generations. e.g. these: http://123an.tjosan.se/skottehistorier.html or these: http://home.swipnet.se/olofson/text/listor/skotte.html

It's somewhat interesting that it's stuck there because the contact between the two countries is relatively limited.

This stereotype is embedded in the name of Scotch tape - 'Scotch' because it's stingy with the adhesive http://en.wikipedia.org/wiki/Scotch_Tape.

I lived in Germany for a few years, where the cheap-crap-shop MäcGeiz has a Scottish person (kilt and bagpipes and all) as a mascot.  I didn't understand this until after a year or so I finally asked, and was told that the Scottish are reputed to be very "sparsam" (i.e. keen on saving money - whether or not that implies frugality isn't clear to me).

Here in Canada where Scottish-extracted people are a huge bloc of the population, the stereotype still exists, although as a Scottish-derived person myself, I think we'd consider it a "home truth" rather than a stereotype, to be honest.  There's an ad for wood stoves and fireplaces on the radio right now that uses it.  I don't at all find it offensive, but in Canada, Scottish-extracted people are, if not the majority of UK-derived people here, then have enough impact on the local culture for us to feel that way, so it comes off as more like self-deprecating humour.  Where you stand depends on where you sit.

I'm married to a Scot, and incredibly familiar with the stereotype. From his perspective, though, the Scots are "canny," not cheap. Canny means being cheap, but out of shrewdness.

On Valentine's Day, Britons exchange cards and flowers with their sweethearts.
Perhaps you might like to make a card with a Scottish theme. The following examples were posted by UK-based Telegraph Books in the 1990s in 'Inspiration for all ages.