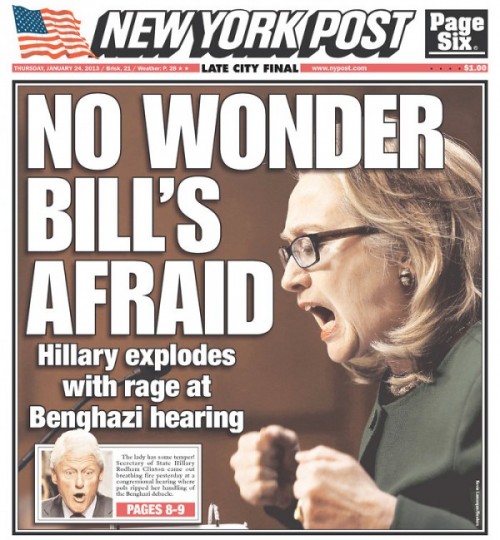 The not-so-subtle sexist messages include:

Despite rapid gains in women’s political and corporate leadership since the 1970s, powerful women are still held to the damaging double-bind of appearing “properly” masculine in order to appear
leaderly and “properly” feminine so as to not violate social expectations.

My immediate reaction to this was flip: guys, threatened much?  But I suppose it makes sense that they feel threatened, as they define themselves not by what they are but by what they're not.  I don't see many (any?) positivist definitions of masculinity; more prevalent is that derived by the contours of otherness, such as "not womanly."  So to see a woman transgress those assumptions must be very threatening indeed to such delicate and fragile manhood.

Clearly this has nothing to do with the fact that the Post is a Republican leaning rag and Hillary is currently considered a near lock for the Presidential nominee of the Democratic Party.

Is this sociology, or political partisanship?

1. right wingers complained a LOT about Bill Clinton's reputed propensity for 'purple rages' (look it up). But he's not ordering anyone around currently so it doesn't matter.
2. Her anger during the hearing was kinda wierd anyway, it rose quickly and was in response to her being accused... "what difference does it make" (which was non-responsive and evasive). It also qualified as 'explosive'. She wasn't mad the whole time. There was one 'explosive' incident.

3. the 'cowed' dynamic is reflective of the fact that Bill lied and cheated on Hillary numerous times. So there's more to the dynamic of it than the description. Its more "When a man owes his continued political career to the public forgiveness of his powerful wife, he is cowed by her private anger" which is obvious and non-controversial, reflecting worse on Bill than Hillary.

4. Policing? It obviously isn't working. New tactics needed if the idea was policing.

I have noticed a lot of 'policing' comments coming from the left about Obama, asking why isn't he "madder" or "angrier" and saying he needs to be madder and angrier if he's going to accomplish anything.

a man who used to lead the free world

I work for a feminist organization, and right-wingers are always demanding that we speak out in defense of conservative women in the public sphere whenever they are the target of a sexist insult. If we fail to do this EVERY time, we are accused of being hypocrites. So, I wonder how many right-wingers spoke out against this cover?

Anyone who thinks this is liberally slanted might want to review similar criticism of Thatcher, a woman who practically defined conservatism...

Could also talk about how it turns domestic violence into a punchline. Imagine the same cover with the genders switched... bit of a different connotation.

Around the same time, I was listening to NPR's coverage of the hearings. They described Hillary as "emotional and angry".

Two thoughts immediately crossed my mind -- A) how often would you hear a man described that way in the same circumstances? and 2) anger IS an emotion; emotional seemed to be used as code for "hysterical woman". I really expect more of NPR, though not so much of the Post.

Don't forget that this cover says if we talk about women, we must talk about their corresponding male figures, as well.

I'm astonished at this picture - of course there was a time during the hearing when things got heated and she spoke angrily. But that's not remotely unusual considering the issue at hand. The picture strikes me because I work at a library, and the morning after the hearing I processed a good dozen newspapers, all featuring a different picture of Clinton at the hearing on the front page. In many of them she was talking, probably even making some heated points; however, in none did she look like this. I'm sure they had to carefully wait for such an angry-looking moment.

Here's a good smattering of other pictures from the same day. (I remember thinking the NYT one was even quite charming. She looks much better after being ill!)

[...] -Sociological Images brought up an interesting point on the different ways society views men and women who act on strong emotion [...]

I actually don't think this image in unflattering. To me, this is a beautiful strong and powerful image of Hilary defending what she believes in! :)

"'When women raise their voices to be heard over the noise, they sound
hysterical,' she says. 'It’s a sexist world. If you lose control over
your lower register, you’re going to be seen as a nut.'"

That's Elizabeth May, check out this article about her: http://thewalrus.ca/house-rules/?ref=2012.05-politics-house-rules&page=

With all due respect, Hillary's testimony was a choreographed puppet show,
as anyone who read the transcripts of Benghazi would know, which it seems intelligent readers would need to see,... or that 'We came, We saw, He Died, Haww, Haww, Haww' indicates a psychotic personality disorder, especially considering that Hillary's final act was their Trans Pacific Partnership, taking away American's protection against environmental, toxicological and wage damages from Asian country imports, as she moved another 1 million female jobs to Myanmar, where the women there work for $6 a DAY. Good job, HRH! Personality politics becomes a disease when you are voting for a Globalista.

Why Heterosexism and Sexualized Violence are Linked, Part II | Our Stories Untold — March 21, 2014

[…] Hillary Clinton has often experienced gender policing. This New York Post title implies that when a powerful woman raises her voice to make a point, she is out of control — “exploding with rage.” For information about policing Clinton, click here. […]