The Rise and Fall of “Hilary” and Hillary

I’m generally skeptical about claims that names in the media have a big impact on parents’ choices of what to name the baby (see this earlier post on “Twilight” names).  But Hilary Parker points out some examples where celebrity influence is unmistakable.  Like Farrah.

“Charlie’s Angels” came to TV in 1976, and the angel prima inter pares was Farrah Fawcett.  This poster was seemingly everywhere (and in 1976, that barely noticeable nipple was a big deal): 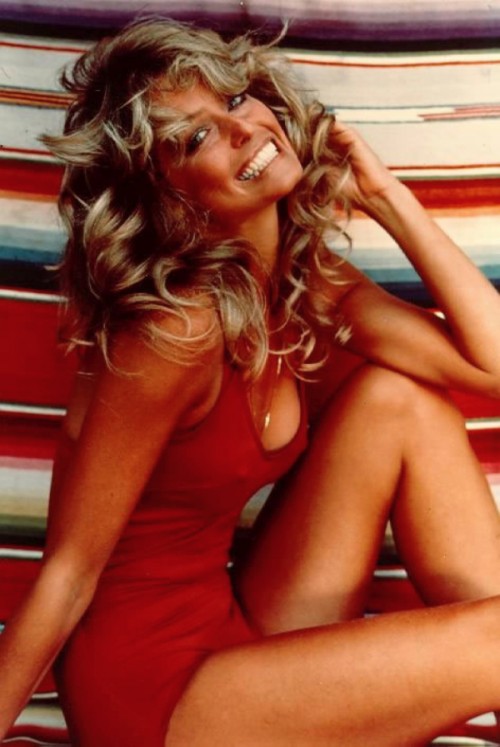 But as with most names that rise quickly, Farrah went quickly out of style.  If you see a Farrah on a dating site listing her age as 29, she’s lying by six or seven years.

Hilary is different.  The name grew gradually in popularity, probably flowing down through the social class system.  There was no sudden burst of popularity caused by the outside force of a celebrity name (see Gabriel Rossman’s post on endogenous and exogenous influences).  Then in 1992, Hilary seemed to have been totally banned from the obstetrics ward.

Surely, the effect came not from word of mouth but from a prominent Hilary (or in this case, the rarer spelling Hillary), the one who said she wasn’t going to stay home and bake cookies. 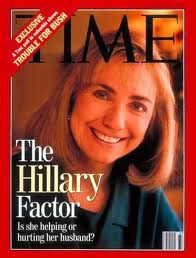 Maybe now that Hillary is getting a favorable press — good reviews for her stint as Secretary of State — the name might return to its 1980s popularity.

I actually believe the 2009 one is probably related to farrah fawcett's death.

I have known quite a few Middle Eastern women (especially from Iran) named Farah, Farrah, etc so there is that, too.

My favorite example is "Samantha" - a name almost entirely inspired by the TV show Bewitched.

"Maybe now that Hillary is getting a favorable press — good reviews for her stint as Secretary of State — the name might return to its 1980s popularity."

Maybe the name Benghazi will take off.

Honestly, I think the steep decline regarding Hilary?  The difference in the name's spelling; I know a dozen girls 3-4 years younger than me named "Hillary," but have never met a girl my age or younger named "Hilary."  It's as simple as that; it has nothing to do with Hillary Clinton not staying home and baking cookies.  That was not a popular attitude in 1992, and honestly, people name their kids after prominent people no matter what they do.  You'd need a prominent figure who was both incredibly destructive and had a particularly unusual name to completely decimate the name rankings like that (think Adolf Hitler; there are probably tens of thousands of men in their 70s running around Germany going by their middle names, though you'd be hard pressed to find more than a handful of Adolfs younger than them anywhere), that name would not drop that drastically in popularity just because a VERY well liked presidents relatively well liked wife offended a few conservative jerks by not baking cookies.  Spelling SERIOUSLY matters when tracking these trends.  My name is not terribly uncommon (at least not starting around when I entered preschool), but it's incredibly often victim to the "yoonike" spelling trend, in addition to having two traditionally accepted spellings, one being particularly more common for girls (it's a unisex name, though very uncommon for boys nowadays).  As a result, the way my name is spelled (the most common, traditionally feminine way) turns up at about the tail end of "100 most popular baby names" lists, while the traditionally masculine version and the "yoonike" versions wouldn't warrant a rank at all.  If they were combined, despite having about 10 options to choose from, my "name" would rank much higher than it does.

Note on this link, that "Sophia" is ranked number one.....and "Sofia" is ranked 19.  Right in the top 20, it's shown that essentially identical names aren't counted as identical if they're spelled differently.  Nor do generally accepted nicknames used as given names ("Elizabeth" and "Ella" are listed separately).  In fact....

While "Hilary" disappeared in 1992, "Hillary" EXPLODED, and while it declined after the 1990s, it still hangs on to a moderate amount of popularity.

Also, a more minor irritation, but the idea that if a name dropped in popularity, it must be nonexistent bugs me.  Having grown up with a name that was, at the time, unusual or masculine, it bugs me that if you happen to be named at a time that doesn't coincide with being on a top ten list of "trendy omg baby names that all the celebrities named their kids last week," you must not even exist.  29 year old Farrah may very well be 29, she just likely didn't have to identify herself as "Farrah J." in third grade to differentiate herself from the six other Farrahs.  Not everyone is Michael, Sarah, John, or Emily.  People freaking make up their kids' names all the time, so it's not really shocking if someone's name is five years out of fashion.

As "Tusconian" mentioned, spelling is important (because often names seem to be unpopular, when they are actually very common but with a different spelling).  If you track girls names beginning with "Hil" you'll see that names beginning with that stem have been in decline.  Additionally, it's worth noting that "Tara" "Kara/Cara" and "Sara/Sarah," (as well as girls names beginning with "Fe", as Farrah is often pronounced with the same first sound as "Felicity" or "Felicia") spiked in the 80's).  These sounds were popular at the same time that Farrah Fawcett was popular; do we really think she's responsible for all these trends?
(you can check out more baby name patterns throughout history at http://www.babynamewizard.com/voyager# )

Sociologist Stanley Lieberson wrote a Matter of Taste, an interesting book about baby-naming trends (among others).  It is worth a look, as it de-bunks a lot of the myths surrounding these types of phenomena.

We like to think that individuals have huge impacts on society, and in some cases they do, but mostly when we observe these "huge impacts" it's because society was primed for the change.
Although it's fun to think that Hillary Clinton changed the fate of baby names, it's an erroneous assumption.

Hilary is my middle name, and almost became my first, but my mother knew so many Hilary's (Hilaries?) when I was born (1983) that she chose a different first. Hilary means "Hilarity; laughing out with joy". I'm happy it's in my moniker.

The ultimate decline in civilization happens when there is no consolidated power, as an empire, to keep order or enforce property laws. As https://topcvwritersuk.com/ said There are all sorts of natural mechanisms that can lead to the dissolution of society.

Learning new things is a continuous process, not a one-time activity. Your brain is like a muscle; it needs exercise to keep it fit and strong. Here are some tips to help you keep your brain in shape. https://www.hearthstonedesign.com/how-to-choose-the-best-paper-writing-service/

Learning new things is a continuous process, not a one-time activity. Your brain is like a muscle; it needs exercise to keep it fit and strong. Here are some tips to help you keep your brain in shape. https://www.hearthstonedesign.com/how-to-choose-the-best-paper-writing-service/

I almost hadn’t had free time before I came across a grademiners.com review because it seems our professors believe that students don’t need personal life. We get numerous tasks every day, so the list of assignments never ends even if you study around the clock and without days off.
https://www.writingpapersucks.com/grademiners-org-review/