Steelers vs. Cowboys: Which is America’s Football Team?

An expanded version of this post is cross-posted at Montclair SocioBlog.

Six years ago, I wrote that the Pittsburgh Steelers had become “America’s Team,” a title once claimed, perhaps legitimately, by the Dallas Cowboys.

…based on their huge fan base and ability to remain the most popular team coast-to-coast, I think the Dallas Cowboys have earned the right to use the nickname  ‘America’s Team’.

To get data, Blatt posed as an advertiser and euchred Facebook into giving him some data from 155 million Facebook users, about half of the US population.  Blatt counted the “likes” for each NFL team: 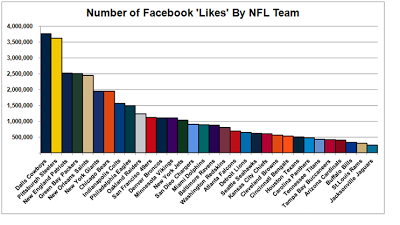 Unfortunately, Blatt doesn’t provide that information. So for a rough estimate, I took the number of Facebook likes and subtracted the metro area population.  Most teams came out on the negative side. The Patriots, for example, had 2.5 million likes. but they are in a media market of over 4 million people.  The Cowboys too wound up in the red  3.7 million likes in a metro area of 5.4 million people. 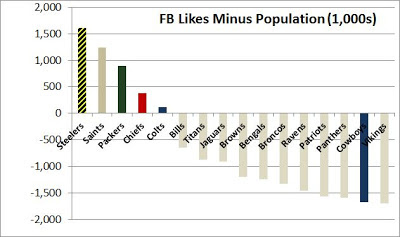 Likes outnumbered population for only five teams.  The clear winner was the Steelers.

very poorly done, this whole exercise is completely meaningless, except to reveal how useless sociologists are with data/analysis.

it doesn't make sense to subtract the teams' metro. areas' populations as a way of removing teams' local/regional support from the equation -- some teams have no other competitors nearby, and thus have local fandom extending far beyond their metro area. in other cases, multiple teams share the same metro area.
and, not everyone has facebook, so, this post is a measure of the most popular teams on facebook, if anything...some teams may be more popular with people less likely to be on facebook (for whatever reason).

"1555 million Facebook users" is far more than half the US population, also clearly a typo.

I wonder... how do these cities compare as far as % of population who grew up there but moved away?  I'd bet there are more people who left Pittsburgh than left some of these other cities....