Are Conservatives Happier than Liberals?

In the New York Times, Arthur Brooks argues that conservatives are happier than liberals.

Brooks starts with a reference to Barack Obama’s remark four years ago  about “bitter” blue-collar Whites who “cling to guns or religion.” Misleading, says Brooks.  So is a large body of research showing conservatives as “authoritarian, dogmatic, intolerant of ambiguity, fearful of threat and loss, low in self-esteem and uncomfortable with complex modes of thinking.”

Despite that research, it’s conservatives, not liberals, who identify themselves as happy.  And, Brooks adds, the farther right you go on the political spectrum, the more happy campers you find.

Brooks cites a couple of surveys that support this view.  I was a bit skeptical, so I went to the GSS. 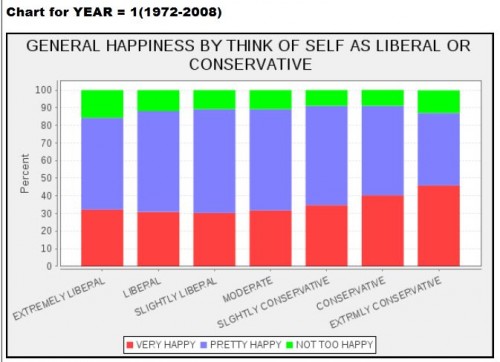 Sure enough, by about 10 percentage points, more conservatives identify themselves as “very happy” than do liberals.  The difference is even higher among the extreme conservatives.   As Brooks says, “none, it seems, are happier than the Tea Partiers, many of whom cling to guns and faith with great tenacity.”

Religious participants are nearly twice as likely to say they are very happy about their lives as are secularists (43 percent to 23 percent). The differences don’t depend on education, race, sex or age; the happiness difference exists even when you account for income.*

I still found it hard to reconcile these sunny right-wingers with the image of bitter and angry Tea Partiers.  Then I remembered that the Tea Party is a very recent phenomenon.  To a great extent, it’s a reaction to the election of President Obama.    But Brooks is looking at pre-Obama studies of happiness.  The most recent one he cites is from 2006.  As the GSS graph above shows, Brooks is correct when he says, “This pattern has persisted for decades.”  But those decades don’t include the Tea Party.

Maybe conservatives were happy because until recently, they didn’t have much to be bitter about.  The US was their country, and they knew it.   Then Obama was elected, and ever since November 2008 conservatives have kept talking about “taking back our country.” (See my “Repo Men” post from 2 1/2 years ago.)

What if we look at the data from the Obama years? 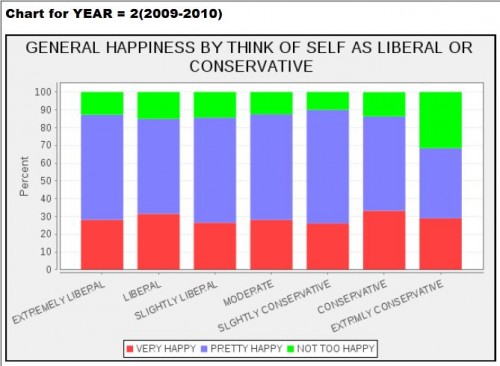 Maybe that bitter Tea Party image isn’t such a distortion.  The GSS does not offer “bitter” or “Tea Party”  as choices, but those who identify themselves as “extreme conservative” are nearly three times as likely as others to be “not too happy.”  And overall, the happiness gap between conservatives and liberals is hard to find.

For all I know, Brooks’s general conclusion may be correct, but the recent data do at least raise some questions and suggest that the political context is itself a relevant variable.

Nearly eighty years ago, Harold Lasswell said that politics is about “who gets what, when, and how.”  Maybe the lesson here is that if you are going to study the connection between political views and happiness, you should take account of who is getting what, and when.

*That’s a bit misleading.  Happiness is in fact related to income, race, and education in exactly the ways you would expect, though for some reason Brooks does not include those variables in his analysis.  What Brooks means is that the religion effect holds even when you control for those variables.

First, thank you for this blog; i recently discovered it and have been reading the archives excitedly. I will be happily encorporating some of the discussions here into my classes (I teach composition and literature at a SUNY college in NY state).

In reference to the above post, it seems to me that most surveys and statistices are pretty useless as a measure of human opinion. Humans, in my observation, can never be standardized.  It would seem that the issue above may be one of the subjective definition of "happy". How happy are you with your perosnal life?, for enstance, is a much different question than how happy are you  ith the government. For me, for example, I am quite happy with my personal life and with my spirtuality and quite unhappy with how the US government is being run, now, or in the past.

I strongly agree that conservatives may have seen themselves as "happy" under the Bush administrartion but may now be very unhappy with the govt, but still very happy with their personl religious choices.

There also seems to be an invisible issue here that has to do with choices that individuals can make for themselves on a daily/weekly basis, such as attending a religious instituion or not, and choices that don't fell like choices to most people, like politics and state/federal laws.

As a college professor I never allow my students to use only statistics or charts to argue or "prove" anything.

What an interesting study.  I love how the second graph demonstrates the importance of using an appropriate sample if you're going to extrapolate to a larger group.

I wonder if some groups might feel more pressure to say that they're happy?  And then I wonder if claiming to be happy could actually have the placebo/self-fulfilling effect of increasing happiness.  And then I get a headache.

It's interesting to note that in a lot of Evangelical/conservative Christian circles, depression is a pretty big tabboo; experiencing it may be considered a sign of sin or personal failure. Therefore, at least some of the Conservatives may be more reluctant than Liberals to admit to their own depression when asked; or, for that matter, even to consciously acknowledge it.

Of course, in fact many or most people in the US today who identify as conservative long instead for an imagined past or, increasingly, are actually radical libertarians.

And we were Clingin', yeah just-a-clingin'
My guns, they're as pretty as Beyonce when she sings
I can't believe I'm out here on the front porch in this swing
Just a clingin'

and I thought ignorance was bliss.

Liberals are just more honest. About everything, pretty much.

[...] See the General Social Survey (GSS) in action: Are Conservatives Happier Than Liberals? Sociological Images is designed to encourage all kinds of people to exercise and develop their [...]