The “Working Family” Discourse and the Invisibility of Individuals

It’s not that “working families” don’t exist, it’s just the way most people use this term it doesn’t mean anything.  Search Google images for “working families,” and you’ll find images like this: 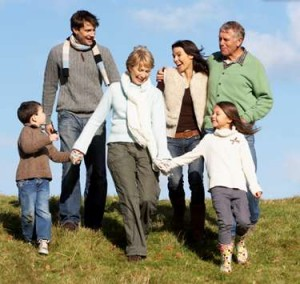 And that’s pretty much the way the term is used: every family is a working family.

To hear the White House talk, you have to wonder whether there are people who aren’t in families. I’ve complained about this before, Obama’s tendency to say things like, “This reform is good for families; it’s good for businesses; it’s good for the entire economy.” As if “families” covers all people.

Specifically, if you Google search the White House website’s press office directory, which is where the speeches live, like this, you get 457 results, such as this transcript of remarks by Michelle Obama at a “Corporate Voices for Working Families” event. The equivalent search for “working people” yields a paltry 108 hits (many of them Obama speeches at campaign events, which include false-positives, like him making the ridiculous claim that Americans are the “hardest working people on Earth.”) If you search the entire Googleverse for “working families” you get about 318 million hits, versus just just 7 million for “working people” (less than the 10 million that turns up for “Kardashians,” whatever that means.)

You would never know that 33 million Americans live alone — comprising 27% of all households. And 50 million people, or one out of every 6 people, lives in what the Census Bureau defines as a “non-family household,” or a household in which the householder has no relatives (some of those people may be cohabitors, however). The rise of this phenomenon was ably described by Eric Klinenberg in Going Solo: The Extraordinary Rise and Surprising Appeal of Living Alone.

This is partly a complaint about cheap rhetoric, but it’s also about the assumption that families are primary social units when it comes to things like policy and economics, and about the false universality of “middle class” (which is made up of “working families”) in reference to anyone (in a family with anyone) with a job.

This isn’t all bad. Families matter, and part of the attention to “working families” (or Families That Work) is driven by important problems of work-family conflict, unequal care work burdens, and so on. But ultimately these are problems because they affect people (some of whom are in families). When we treat families as the primary unit of analysis, we mask the divisions within families — the conflicts of interest and exploitation, the violence and abuse, and the ephemeral nature of many family relationships and commitments — and we contribute to the marginalization of people who aren’t in, or don’t have, families.  And those members of the No Family community need our attention, too.

The “Working Family” Discourse and the Invisibility of Individuals » Sociological Images | digitalnews2000 — January 23, 2013

Great post. It's also true that "working families" leaves out those who are unemployed, incarcerated, or do unofficial work. Discourses about "working families" and the "middle class" help draw boundaries between worthy (sanctioned families, workers, and middle class) and less worthy (single or unsanctioned families, non-working, poor). And these divisions influence public policy. Again, excellent post. Thanks.

We live with so many assumptions about life and the society we live in and often to the diservice of those marginalized and outside our assumed reality. Thank you for bringing another reality to me.

In discussing this post with other sociologists it was brought to my attention that "working people" is too close to "working class" and it is a safer political discourse in the U.S. to use "working families" as it also fits with right wing "family values" rhetoric. Love this post. Thanks.

That was a whole lot of complaining about potential misinterpretation of what "family" means without giving any definition of "family".

"But ultimately these are problems because they affect people"

It's reassuring to see somebody write that.  Even if they operate via group membership, social problems are problems because they concretely affect the lives of individuals.

"Working families" was a phrase thrown around ad nauseum by former Prime Minister Kevin Rudd prior to the 2007 federal election in Australia.   It drove me batty at the time, and still does when it's used, because no-one seems to know just what a 'working family' is, other than a warm fuzzy phrase to make people more favourable to the particular party using the phrase at the time.  I'm pretty sure my family isn't a 'working family' because we have two parents but only one of them working, but then again, maybe we are?   Ultimately, it's a meaningless statement with layers of meaning.

A family can have any number of members, including one.  Where's the problem?