For the last week of December, we’re re-posting some of our favorite posts from 2012. Cross-posted at Pacific Standard and Global Policy TV.

The United States is unusual among developed countries in guaranteeing exactly zero weeks of paid time-off from work upon the birth or adoption of a child. Japan offers 14 weeks of paid job-protected leave, the U.K. offers 18, Denmark 28, Norway 52, and Sweden offers 68 (yes, that’s over a year of paid time-off to take care of a new child).

The U.S. does guarantee that new parents receive 12 weeks of non-paid leave, but only for parents who work in companies that employ 50 workers or more and who have worked there at least 12 months and accrued 1,250 hours or more in that time.  These rules translate to about 1/2 of women.  The other half are guaranteed nothing.

Companies, of course, can offer more lucrative benefits if they choose to, so some parents do get paid leave.  This makes the affordability of having children and the pleasure and ease with which one can do so a class privilege.  A new report by the U.S. Census Bureau documents this class inequality, using education as a measure.  If you look at the latest data on the far right (2006-2008), you’ll see that the chances of receiving paid leave is strongly correlated with level of education: 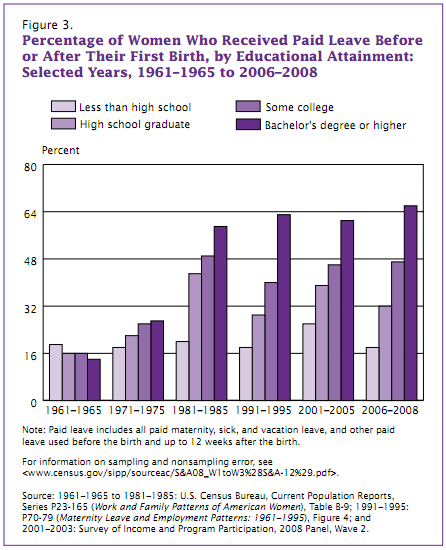 Looking across the entire graph, however, also reveals that this class inequality only emerged in the early 1970s and has been widening ever since.  This is another piece of data revealing the way that the gap between the rich and the poor has been widening.

Just to emphasize how perverse this is:

We often use the minimizing word  “just” when  describing what stay-at-home parents do.  “What are you doing these days?” asks an old friend at a class reunion.  “Oh, just staying home and taking care of my kids,” a parent might say, as if raising kids is “doing nothing.”  We trivialize what parents do.  But, in fact, raising children is a valuable contribution to the nation.  We need a next generation to keep moving forward as a country.  Unfortunately the U.S. continues to treat having kids like a hobby (something its citizens choose to do for fun, and should pay for themselves).  Without state support for early parenting, being present in those precious early months is a class-based privilege, one that ultimately exacerbates the very class disadvantage that creates unequal access to the luxury of parenting in the first place.

Lacking the strong instinct to want children which some people seem to have, I made the rational choice and chose to not have them.  You point that society punishes having children is not something new and something I realized when I was like 17.

"These rules translate to about 1/2 of women.  The other half are guaranteed nothing."

And what about the OTHER other half?  What about male parents?

This might seem beside the point, but it sure feels like that paragraph is perpetuating what you've often critiqued.

When I had children in 1980 we didn't even have FMLA - job protected time off to care for our children. These laws did exist in other countries however.  We had children anyway.  Our having children was our choice - not something the government could or could not encourage.  And so now we have FMLA and NOW we are complaining again.  Is there nothing that the government gives enough of?  Facts are facts - people from different socio-economic backgrounds do and will always have different opportunities.  The government cannot make this equal - or force companies to make it equal for others.

If you want kids, have them.  If you don't, don't.  If  you want your kids to have a great education and don't like the education that is given in your neighborhood, move, find a better job, encourage your children to succeed in the community as it is.   We ARE unequal, that is what makes us human.

That's our two-faced society.  They preach about the sanctity of motherhood, while doing absolutely nothing to support mothers.

That's our two-faced society.  They preach about the sanctity of motherhood, while doing absolutely nothing to support mothers.

Why you should support paid maternity leave? Because I already have it « blue milk — April 3, 2012

[...] was intrigued by “this post about the inequality of the work force where parents cannot get paid leave, especially those who are lower-class or less educated. One way [...]

[...] teaching about gender work and family in my intro sociology class this month. Here is a link to a bar graph and story that explains class differences in access to parental [...]

> But, in fact, raising children is a valuable contribution to the nation.
I'm disappointed to find that even here, people apparently still think in terms of (competing?) nations.

(I'll assume you mean to imply that conceiving a child is a contribution as well, even though you did not say that -- please correct me if I'm wrong).

We should thrive for what's good for humanity, not a single nation; in this case, as often, one of those goal is actually the opposite of the other: We should have fewer children to cut down on the overpopulation of the planet.

[...] on Class Privileges and Parental Leave on the Sociological Images web site for more about maternity [...]

state support should be universal in rearing children but does it promote having children? Last I looked many countries in Europe were experiencing lower birth rates.

Thank you for this:

"But, in fact, raising children is a valuable contribution to the nation.  We need
a next generation to keep moving forward as a country.  Unfortunately
the U.S. continues to treat having kids like a hobby (something its
citizens choose to do for fun, and should pay for themselves).  Without
state support for early parenting, being present in those precious early
months is a class-based privilege, one that ultimately exacerbates the
very class disadvantage that creates unequal access to the luxury of
parenting in the first place."

I am a WIC breastfeeding peer counselor, which means I provide education support and encouragement to low income mothers who want to breastfeed their children.  Most of the moms I work with initiate breastfeeding, but very few who return to work within the first six months postpartum continue to breastfeed for the full recommended one year.  The reasons mothers who have successfully initiated breastfeeding decide to stop are many, complicated and intensely personal, but for almost all of these moms, work is a deal breaker.

Pumping at work is hard enough when you can flex schedule and you have an office door to close.  The mothers I counsel work in low pay service jobs where staffing is kept to a bare minimum, space is limited and facility designs discourage privacy.  When I say return to work within the first six months I am being generous. Most of these moms return to work at six weeks postpartum.  They wait that long only because our state does not allow children younger than 6 weeks to attend licensed childcare.  Under the best circumstances it usually takes a new mom six weeks to start to feel confident breastfeeding - and that's if things are going perfectly.  Instead of getting to know their babies and learning to be confident breastfeeders, these moms worry about their pumps and storing extra milk before their supply is even established and fret that their babies will become too comfortable at the breast and won't take a bottle when they must in a week or two. It is very difficult to breastfeed successfully under these conditions, although amazingly some do.

The unfortunate irony is that the children of low income families are the ones who stand to gain the most from breastfeeding.  All the little boosts that breastmilk and nursing can provide could potentially mitigate some of the disadvantage imposed by poverty. Please note I'm not saying or even implying that breastmilk is magic.  It is just one of many things that can help make lives better - or more optimal, as they say.  We all benefit when poor children have a better start in life, and yet in this and many other ways we are heading in the opposite direction.

it is also significant given what we know about the importance of relationships in optimal brain development and the new research about toxic stress and poverty.  this is how inequality perpetuates itself, one baby at a time.  shameful in America.

I don't believe I have ever seen a more simple-minded, pin-headed, and facetious argument in my entire life!  Does the author really expect small companies to be able to afford this?  What about all of the government-dependent baby factories who treat THAT as their job?  There is a reason why they are in the lower class.

Having a child is not a birthright; it's a decision.  This decision should be based on many parameters, including one's financial situation.  If more people took the time to think this through, perhaps they could get themselves educated and enter the class who can either afford the time off, or have a job where it is paid.

[...] I wrestle with this.  By understanding racism, heterosexism, and (to a lesser extent) sexism, and having a perspective of the social [...]

[...] I wrestle with this.  By understanding racism, heterosexism, and (to a lesser extent) sexism, and having a perspective of the social [...]

Hi buddy, life is tellgamestop.com for me as of now to be frank.

So be yours MyCFAVisit Survey we dead tell yourself.