Mojca P., Jason H., Larry H., and Cindy S. sent us a link to a story about a Saudi Arabian version of an IKEA catalog in which all of the women were erased.  Here is a single page of the American and Saudi Arabian magazines side-by-side: 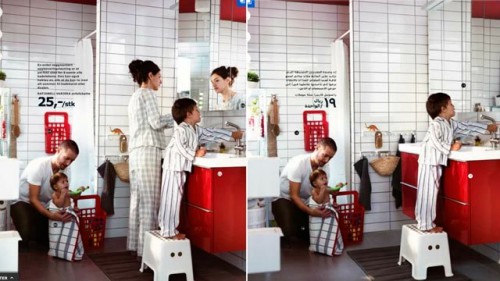 After the outcry in response to this revelation began, IKEA responded by called the removal of women a “mistake” “in conflict with the IKEA Group values.”   IKEA seems to have agreed with its critics: erasing women capitulates to a sexist society and that is wrong.

But, there is a competing progressive value at play: cultural sensitivity.  Isn’t removing the women from the catalog the respectful and non-ethnocentric thing to do?

Susan Moller Okin wrote a paper that famously asked, “Is Multiculturalism Bad for Women?”  The question led to two decades of debate and an interrogating of the relationship between culture and power.  Who gets to decide what’s cultural?  Whose interests does cultural sensitivity serve?

The IKEA catalog suggests that (privileged) men get to decide what Saudi Arabian culture looks like (though many women likely endorse the cultural mandate to keep women out of view as well).  So, respecting culture entails endorsing sexism because men are in charge of the culture?

Well, it depends.  It certainly can go that way, and often does.  But there’s a feminist (and anti-colonialist) way to do this too.  Respecting culture entails endorsing sexism only if we demonize certain cultures as irredeemably sexist and unable to change.  In fact, most cultures have sexist traditions.  Since all of those cultures are internally-contested and changing, no culture is hopelessly sexist.  Ultimately, one can bridge their inclinations to be both culturally sensitive and feminist by seeking out the feminist strains in every culture and hoping to see those manifested as it evolves.

None of this is going to solve IKEA’s problem today, but it does illustrate one of difficult-to-solve paradoxes in contemporary progressive politics.

Lisa Wade has published extensively on the relationship between feminism and multiculturalism, using female genital cutting as a case.  You can follow her on Twitter and Facebook (where she keeps discussion of “mutilation” to a minimum).

Interestingly, when the woman are erased from the catalogue, the resulting images are of men performing all the domestic and childcare duties.

Doesn't a second's thought prove that cultural considerations must come after human rights?

What if Western Europeans argued that colonizing others was part of their culture? Or, for a super-blatant thought experiment, where does the culture-first argument leave you when dealing with cannibals?

First basic human rights. Then culture. It's the only way to avoid total absurdity.

Which means that the question is really whether women are human. This stuff, after all, only comes up when the issues involve women. The answer, on the whole, and that includes the left, seems to be "no," interestingly enough.

It's interesting to compare this to the Saudi breast cancer awareness campaign that featured only men:

And then there's this meme:

Another two things that play into this is that from what I've heard, this concession is made to Saudi Arabia alone, which means that it is the exception and not the rule. Also, the catalog features men in non traditional roles, even gay couples (might be wrong on that one though). So if: 1, no concessions of this kind is made to any other country, it's not a consistent policy and 2, if the removal of women is the only concession deemed necessary to Saudi Arabia, there is good reason to think that IKEA was wrong to think of it as necessary, since other broken taboos didn't harm them.

So really, from this point of view it is hard to see a real dilemma rather than a bad decision.

I think plenty of Saudi women have made it clear they want no part of the sexism in their culture. That IKEA bows to the fuckers who do like sexism, rather than those Saudis who don't, speaks volumes about how little women are valued in all cultures.

This post to me is a non-post. I have no idea what it's argument is. Or it's point. Or its analysis.

I'm not going to lie, I'm having trouble understanding what was so offensive about the original photograph...

If Ikea were to show cultural sensitivity for Saudi Arabia then I think it should have photoshoped a Saudi man into the existing catalog instead of this super Western looking guy who's also helping out his wife/girlfriend with the kids. I know nothing about the Saudi Arabian culture but being Turkish I can only guess that 90% of men don't help their kids brush their teeth. It's the woman's job. (I don't agree with this, please don't get me wrong) It's discriminatory that only images that depict the women differently than the normal are taken out. Also nobody mentioned but I think religion plays a big role here. Of course it's hard to separate religion from culture especially in countries where the vast majority of people believes in the same religion, but I think an additional reason why they took the woman out is that her hair and other body parts were not covered. Note that they did not put an "accepted image" of a Saudi woman. This shows they women have simply NO space in the public sphere. Things change and this will too.

"Ultimately, one can bridge their inclinations to be both culturally
sensitive and feminist by seeking out the feminist strains in every
culture and hoping to see those manifested as it evolves."

No.  I refuse to be "sensitive" to slavery and oppression.  Any why should I, as a woman, "hope" to see change.  Why shouldn't I act for change?   If more people took the passive view you espouse, Aparteid would be alive and well today.  In fact, it is alive and well today: In Saudi Arabia.

So, when catalogs for countries with different nudity taboos are 'edited' in order to comply with American decency laws, it's the same concept, right?

If misogyny is a fundamental aspect of a culture, then it is not a culture that deserves respect. Culture is NEVER a valid excuse for disparity in human rights between groups, no matter how much many cultures, even in my own country, often treat misogyny as an acceptable form as bigotry.

The IKEA store in Riyadh pixillates out women's faces depicted on the in-store merchandising.  To add another layer of interesting, some of the more gender-ambiguous women depicted (ie those with short pixie haircuts and/or slim physiques) escaped pixillation.  One of the side effects of the ubiquitous niqab is that Saudis are some of the least-savvy people I have ever met when it comes to reading and interpreting gender performance.  If she's not wrapped in bows with long hair and boobs, many Saudis had difficulty "reading" her as female.

Why do discussions around Saudi Arabia (especially with regards to gender issues), suddenly seem to give a sense of entitlement to Western speakers to *speak about them* and *for them* in derogatory tones (or, as someone wisely pointed out in a comment, to reiterate the "white men saving brown women from brown men" discourse)?

It amazes me that so many people who have commented here seem ready to jump into this apparent obvious example of human rights violations (as many argued), and revolutionize Saudi to free the poor and oppressed Saudi women [note: I do not align myself with this view, not at all actually.]

Yet, why is it that after decades of militant activism to denounce and demand justice for Missing and Murdered First Nations Women in Canada (http://www.amnesty.ca/atrisk/index.php/stolen-sisters-2/) , there is still very little awareness and even less justice achieved to this day? Isn't that a severe "human right violation" that would deserve immediate action?

Anyways, my point is...
1) has anyone even wondered how do Saudi women have felt about the photoshopping of the Ikea Catalogue? Is it so inconceivable that, perhaps, for them it is not such a big deal, or that maybe they even appreciated it?
2) before jumping into making assumption about another culture and claiming that certain interventions are required to *bring* human rights in Saudi, let's not forget that Saudi women have their own agency and that there are many, way too many, terrifying human right violations happening right here, right now, which are screaming for attention and at which few people care to look.
3) finally, I'll leave with the suggestion that perhaps to photoshop women out of a catologue it is not much worse than photoshopping women's bodies into ideals of feminine perfection.

Human rights, a.k.a. natural rights, are a social construct. They have no independent validity.

The question here is not about Saudia Arabia or how it treats women.  It's about IKEA and it's values.  I'm so disappointed that it was willing to erase women-which probably buy the most at IKEA- in order to do business in another country.  The company is not being culturally sensitive; it's simply willing to compromise it's values and image for money. That's cheap, sad, and a slap in the face to all the women that have made it millions.

[...] in this ad, Ikea removed the women in response to the perceived requirements of their Saudi audience (Ikea [...]

Like it or not, If an ad is successful, it will sell product. It clearly has sold product in Saudi Arabia. Very strategic advertising in that Ikea knew and understood how to tailor-fit its marketing to best reach the target audience. Is is ethical? Maybe not in your culture. May be for other cultures. Deal.