In an effort to map the shape of the dual career challenge, the Clayman Institute for Research on Gender at Stanford University did a survey of 30,000 faculty at 13 universities. The study was headed by Londa Schiebinger, Andrea Henderson, and Shannon Gilmartin.

When academics use the phrase “dual career,” they’re referring to the tendency of academics to marry other academics, making the job hunt fraught with trouble.  Most institutions are not keen to hire someone’s partner just because they exist.  Meanwhile, the academic job market is tough; it’s difficult to get just one job, let alone two within a reasonable commute of one another.

So, what did the researchers find?

More than a third of professors are partnered with another professor: 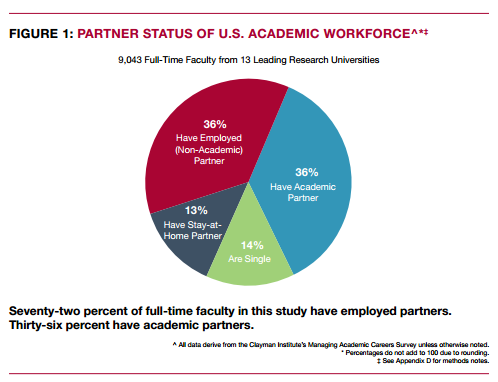 When we break this data down by gender, we see some interesting trends.  Female professors are somewhat more likely to be married to an academic partner (40% of women versus 34% of men), they are twice as likely to be single (21% are single versus 10% of men; racial minority women are even more likely), and they are only 1/4th as likely to have a stay-at-home partner: 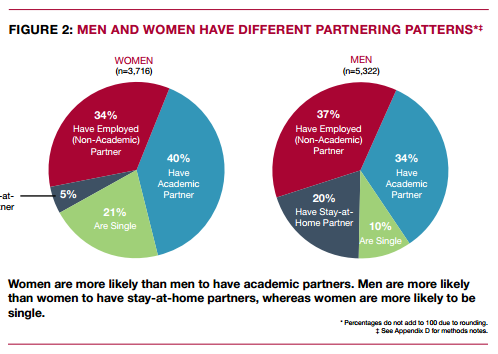 On the one hand, since women are more likely to have an academic partner, the problem of finding a job for a pair of academics hits women harder.  On the other hand, the fact that they are more often single makes choosing a job simpler for a larger proportion of women than men.  (On anther note, if you’ve ever wondered why fewer female than male academics have children, there are several answers in the pie charts above.)

For women who are partnered with another academic, the data is starker than the 6 point difference above would suggest.  The researchers asked members of dual-career academic couples, whose job comes first?  Half of men said that theirs did, compared to only 20% of women.  When it comes to balancing competing career demands, then, women may be more willing to compromise than men. 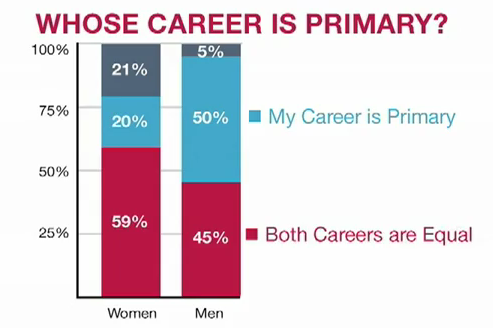 There is a lot more detailed information on academic couples and what institutions think of them in the report. Or, listen to Londa Schiebinger and the other researchers describe their findings:

Somewhat tangentially, it's a good example of how insular the academic world can easily be. I wonder how many other careers have a third of their work force married into the same field....

Is there any breakout for GLBT couples?

Isn't most of this the same in pretty much any industry?  Women with high-powered careers are more likely to be single and childless.  Men are less likely to stay-at-home than women.  On average, men make more money then women, making the family put more emphasis on his job.  I don't think this is anything new.

[...] Gender and the Dual Career Academic Couple. I can’t help thinking of this line from “The Case Against Breastfeeding,” which I had occasion to read the other day:  In my set, no husband tells his wife that it is her womanly duty to stay home and nurse the child. Instead, both parents together weigh the evidence and then make a rational, informed decision that she should do so. [...]

I wonder how many academics HAD an academic partner - and either separated due to the difficulties of managing two careers/long distance relationships, or in which one (usually the woman) ended up changing careers to make things work.

Also, the "both careers are equally important" is nice to say in principle (and my husband and I say it too), but in practice, one is usually forced to decide whose career to risk and whose to support most. Unless you are always willing to live in separate cities, or get very lucky both being offered a job at the same university at the same point in time. (Although even then, for one partner that will often be "settling" for an inferior job over what might have been possible elsewhere, because it is rare that one university will be equally highly ranked for both departments. Or if you don't care about ranking, have equal amounts of research funding, leave, teaching load, etc, for both departments.)

GENDER AND THE DUAL CAREER ACADEMIC COUPLE | Welcome to the Doctor's Office — December 31, 2012

I imagine that much of the gender differential has to do with the fact that most professors and academic workers today are generally older, having been born and raised in the 1960-1990 era when adherence to sexist and gendered roles was still the societal standard. That may explain, for instance, why a whooping 50% of men feel entitled to put their careers over their partner's (as opposed to "only" 20% of women). Assuming that the people surveyed were all professors occupying a similar rung of the salary and prestige ladder, there should be no logical reason for 30% more men to think *their* careers are more important than their female partner's. This is just ridiculous, and I hope as the cultural landscape becomes more egalitarian, the figures will rapidly increase in the "both careers are equal" sentiment.

There is also the issue of significantly more men being unwilling to be stay-at-home workers, regardless of whether their own jobs pay more than their female partner's professorial career. This must also change -- more men must be encouraged to consider "stay-at-home" work as an option, as something that will not undermine their "masculinity" (whatever the hell that term is supposed to mean).

As I see it, these figures clearly demonstrate that we do *not* operate under a perfectly rational economical system of decision-making; indeed, sexist prejudice underlies many of our choices.

We're talking about academics marrying others at the same university? I find the numbers staggering. I work in the home office of a mid fortune 5 company. We've got about 2000 staff at our location and I doubt more then 10 couples work there. This study is saying more than a third of the teaching staff is married to another teacher?

Why is the attraction so great??

I want to say a big thank you to the great Papa for helping me get back my ex wife after  11 months of breakup. It was like a dream come true when my wife came back asking for a second chance after leaving me and the kids for many months with no communication. Thank you Papa, I will forever be grateful. You can contact Papa on call/text or WhatsApp  +( 2 3 4 9 0 3 9 5 5 3 5 2 3