“I Fancy the Lead Singer”: Bands, Fans, and Gender

In “Rock in a Hard Place: Grassroots Cultural Production in the Post-Elvis Era,” William Bielby discusses the emergence of the amateur teen rock band. The experience of teens getting together with their friends to form a band and practice in their parents’ garage is iconic in our culture now; recalling their first band or their first live show is a standard element of interviews with successful rock musicians. Bielby traces the history of this cultural form, which appeared in the 1950s. In particular, he argues that social structures largely excluded young women from full participation in the teen band phenomenon.

Though young women were involved in many other types of musical performance, the pop charts featured many successful female artists in the 1950s, and girls listened to music more than boys, rock bands emerged as a male-dominated (and predominantly White) musical form. One important reason was parents’ concern about the rock subculture and the lack of supervision. Parents might be willing to let their sons get together with friends and play loud music and travel around town or even to other cities to play in front of a crowd, but they were much less likely to let their daughters do so. Gendered parenting, and the closer regulation of girls than boys, meant that girls were less likely to be given the chance to join a band. So while boys were learning to take on the role of active producers of rock music, girls didn’t have the same opportunities.

Yunnan C. sent us photos she took of two shirts at an H&M store in Toronto that made me think about Bielby’s argument: 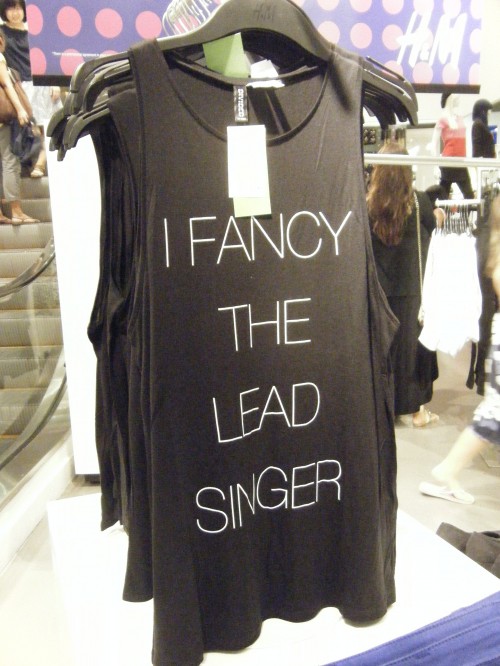 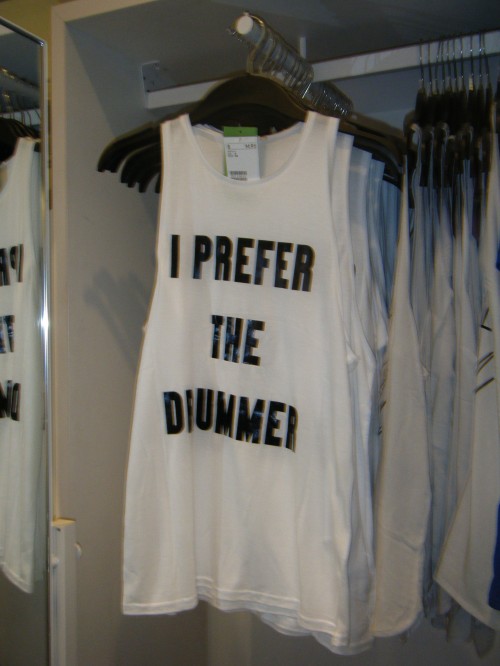 As Yunnan points out,

This, as fashion, enforces this idea that being in a band and playing music are for guys, limiting women to being the passive consumers and supporters of it, rather than the producers.

The shirts don’t just cast women in the role of fans; they specifically frame them as potential groupies, whose fandom is filtered through a romantic/sexual attraction to individual members of a band. Communications scholar Melissa Click argues that female fans are often dismissed because there is a “persistent cultural assumption that male-targeted texts are authentic and interesting, while female-targeted texts are schlocky and mindless—and further that men and boys are active users of media while girls are passive consumers.” While the image of the groupie is as well-known as that of the band, the groupie is usually viewed skeptically, seen as someone with a superficial, inauthentic appreciation of the music, “a particular kind of female fan assumed to be more interested in sex with rock stars than in their music.”

So the H&M shirts reflect gendered notions about who makes music (there were no shirts saying “I am the drummer”) as well as the idea that women’s appreciation for music and other forms of pop culture should be expressed through affection for a specific person, a form of fanhood that ultimately stigmatizes those who express it as superficial and inauthentic.

Those shirts read as fairly obviously ironic to me.

Perhaps the rush to take offense here is coming at the expense of recognizing the intelligence of the girls who are going to buy these shirts?

I seriously want one of these. If I can find one that says "I fancy the bassist" (which is unlikely), then I'd buy it, and wear it on stage, when I'm playing in my band. I play the bass. Wouldn't that be brilliant?

Whoever wrote this has never been in a T-shirt shop before! It's actually worse. As far as the male-targeted stuff goes, take away the boorish sex(ist) innuendo and the endless jokes about beer, and most of what's left is a bunch of logos and trademarked images. Unless sporting a band's logo across your shirt makes you an "active user of media," or a bad joke about boobs is "aunthentic and interesting," I'd say all genders are being treated by most mass-producers of cheap merchandise as passive consumers.

But I think anyone who has been to a big-name pop or rock concert in the last 30 years or so will have noticed a prevalence of homemade fan t-shirts, with cutesy messages about/to certain musicians handwritten across the front, and so forth. These shirts are referencing that ironically, showing how absurd it would be to appropriate this kind of shirt as a generic consumer product. I see them actually as a kind of tongue-in-cheek parody of consumerism, one which is even funnier when inevitably worn somewhere other than a concert.

And what if the wearer is a lesbian?

"While the image of the groupie is as well-known as that of the band, the groupie is usually viewed skeptically, seen as someone with a superficial, inauthentic appreciation of the music, “a particular kind of female fan assumed to be more interested in sex with rock stars than in their music.”

I don't think this is accurate, although I have no way of providing evidence for it.  I think groupies are viewed as having contributed a lot to rock'n'roll history.  Groupies acted as muses for many musicians, and they were often the glue that sustained a musical social scene; the most readily available evidence of this is that many classic songs, albums, and tours were inspired and/or nurtured by them.  I am not refuting that they were often viewed and treated as disposable sex objects, but their musical, visual, and subcultural contributions are also significant.

Does this mean I can't fancy a female drummer?

The comment section of EVERY SINGLE post about feminism, sexism or racism ever on this site: "No, you're reading it wrong. It is [insert satire/irony/other bullshit here]."

Interestingly enough, I first saw the 'I prefer the drummer' shirt on a guy a few days ago. Granted, he was a drummer himself, and I found it pretty funny, but I hadn't realised it was supposed to be a girls' product until this article. A step in the right direction?

okay here is the deal i like these shirts , i think there awesome and to be honest a person has a choice the wear whatever they want saying that someone isn't a fan of the music just because their wearing a shirt saying "i fancy the lead singer" is a little harsh , just because there wearing that shirt doesn't mean they don't love the band as much as someone who isn't. WHAT YOU ARE WEARING DOES NOT AFFECT HOW YOU PERCEIVE THE MUSIC

Another thing i hate is when people assume their better than someone just because of the clothes their wearing. Just because their wearing a shirt like that doesn't mean there willing to sleep around or have sex with every band member on the planet and to be honest i find it degrading that people assume that.As for the matter of saying that its sexist because it's only aimed at women that doesn't mean guys aren't allowed to wear that shirt there is nothing stopping a guy from going and buying this shirt.

So there's my opinion and judging from the other comments this might get some hate but you should never think you're better than someone just because their wearing something you wouldn't.

The shirts look unisex to me.  I wouldn't know they were intended for women except that it says so.

What interests me more about the rock star dynamic is that it seems to be one area in which women are allowed to objectify men.  The male rock stars often revel in their objectification.  Normally when men are praised for physical beauty it is seen as threatening to their masculinity.  So it is interesting that when women do respond to men as sex objects (which one do you think is the most bangable?) they are being described as passive.  In normal circumstances, when men are permitted to gaze on women and objectify them the man is seen as powerful and the woman as passive.

Check out STONEFIELD this amazing all girl blues/rock band 4
sisters  from rural Australia youngest 14-
played the John Peel stage at Glastonbury in 2011 and back for 2013- won the
Triple JJJ award in Sydney.

[...] one of the most interesting I’ve seen comes from sociologist William Bielby (summarized at thesocietypages.org, with supporting evidence from the shop floor at H & [...]