Larry H., Shayna A.-S., and Laura F. sent in a recently released study, “Science Faculty’s Subtle Gender Biases Favor Male Students,” that shows compelling evidence for unconscious gender bias among faculty, specifically in some natural and biological science fields. The researchers asked a national sample of 127 biology, physics, and chemistry professors to evaluate the application materials of an undergrad science student who applied for a lab manager position, a job they saw as a gateway to other opportunities. Everyone was given the same materials (excerpts here), but half the applicants were given the first name Jennifer and half were called John. The participants were told the student would be given feedback based on their evaluations.

The results are sobering. There was a significant difference in the average competence, hireability, and mentoring ratings by gender. Professors who thought they were evaluating a female applicant saw a less qualified candidate than professors who were evaluating the identical application materials but thought it was from a man: 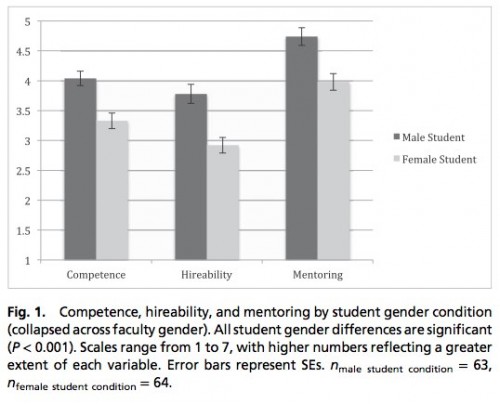 So not only was there a gap in perceived competence and fit for the position, but professors were less willing to engage in the type of mentoring that can help students gain both skills and confidence in their abilities — which can be especially important for under-represented groups.

And despite what you might expect, female professors were just as likely to do this as male professors were. Just thinking an applicant was female seems to have touched off an unconscious bias that led them to see female candidates negatively and to be less willing to spend time mentoring them. Professors’ age, tenure status, and discipline didn’t make a difference, either.

The professors were also asked to recommend a starting salary. Again, there was a significant difference. The average suggested beginning salary for the male candidate was $30,238, while for the female student it was $26,507: 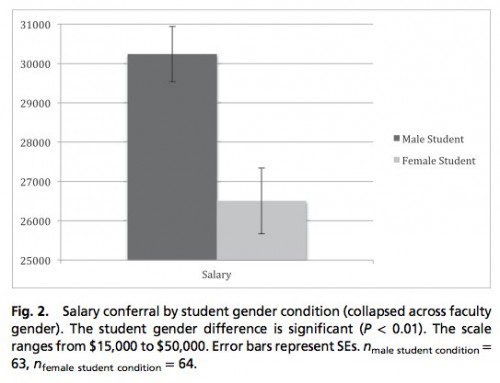 The authors point out that these findings are especially noteworthy because, unlike many studies of gender bias that use college students or people who have never had to make the type of hiring or mentoring decisions they’re being asked to engage in for the study, this sample was made up of scientists who are active in their fields, regularly working with students.

Interestingly, when asked how much they liked the candidate, those evaluating the female student gave a higher score than those assigned the male student. But this didn’t translate into seeing the female candidate as competent. The study authors argue that this is strong evidence for subtle gender bias. The professors didn’t express dislike or hostility toward a female candidate. In fact, they tended to actively like her. But as the researchers explained,

…despite expressing warmth toward emerging female scientists, faculty members of both genders appear to be affected by enduring cultural stereotypes about women’s lack of science competence that translate into biases in student evaluation and mentoring. (p. 4)

This study implies that women in the natural and biological sciences (and yes, surely other fields too) still face prejudices that can impact the opportunities they are given to work closely with professors to gain important experiences and skills, as well as limiting their access to jobs and starting them out at a lower salary. These factors can snowball over time, creating larger and larger gaps in career achievements and income as men capitalize on opportunities while women find it impossible to catch up.

There are some divisions that are less female (including the one I'm in), but the overall condition of the school - from students to admin - is female dominated.

True, this isn't a science-only academic unit, but there is a lot of science that goes on. Still, I don't know the condition in chemistry, biology, and physics to really know how skewed the reality of my academic milieu is.

similar paper, quite well known in some social science and other circles:

Are Emily and Greg More Employable than Lakisha and Jamal? A Field Experiment on Labor Market Discriminationhttp://www.nber.org/papers/w9873

We perform a field experiment to measure racial discrimination in the labor market. We respond with fictitious resumes to help-wanted ads in Boston and Chicago newspapers. To manipulate perception of race, each resume is assigned either a very African American sounding name or a very White sounding name. The results show significant discrimination against African-American names: White names receive 50 percent more callbacks for interviews. We also find that race affects the benefits of a better resume. For White names, a higher quality resume elicits 30 percent more callbacks whereas for African Americans, it elicits a far smaller increase. Applicants living in better neighborhoods receive more callbacks but, interestingly, this effect does not differ by race. The amount of discrimination is uniform across occupations and industries. Federal contractors and employers who list Equal Opportunity Employer' in their ad discriminate as much as other employers. We find little evidence that our results are driven by employers inferring something other than race, such as social class, from the names. These results suggest that racial discrimination is still a prominent feature of the labor market.

Out of curiosity, what was meant by a "biology" department? I ask, because all the biology departments that I've known have undergone severe departmental splits between cellular/molecular/genetics,
physiology/human systems, and ecology/non-human physiology/evolution.
In some cases - as in the case of my undergrad and at my current institution - this has meant a departmental splitting and the demise of a unified "biology department". (Sometimes the name "biology" remains held by one of the new units, other times it's removed completely, other times its included in the names of the new units.) Therefore, administratively, asking the question of what constitutes a "biology" department isn't too strange.

NB: While I'm sure that chemistry
and physics also have their divisional splits, I don't know if these splits are as deep (i.e., they haven't split into independent departments) or if the demographics within different divisions of the department are as skewed as what I've seen (and heard about) between  ecology/non-human physiology/evolution-type departments and the other departments that used to be housed in 'biology'.

Nothing very surprising but the data are clear and nicely significant for 127 data point.

If the scale of salary ranges from 15k to 50k, why does the chart start at 25k? The gender gap is pretty massive here, but the chart seems misleading - it makes it seem like the woman was suggested a salary of a third of the man.

I wonder, if the 2 resumes had NO possible negative remarks at all if that would hold true as well. Like you take out the thing about taking a bit longer to get serious in college.

If so, it would point in the direction of how gender bias works subtly. You end up giving more weight to negative comments about a woman than a man.

"he's rather talkative" (oh, well, guess I can put up with that if I have to)

"
This study implies that women in the natural and biological sciences (and yes, surely other fields too) still face prejudices that can impact the opportunities they are given to work closely with professors to gain important experiences and skills, as well as limiting their access to jobs and starting them out at a lower salary."

Does it imply this? I have a few questions..

Perhaps the 'expectations' of genders in college are different. Perhaps what are seen as impressive activities or skills range among the genders.. and while keeping the information identical outside of the name seems to keep things constant, perhaps despite the illusion that the information is equal it really isn't. Perhaps it isn't gender bias in the sense that it weakens a female, but rather expects different skills and experience based on gender.

I think this study implies that what is good for a male may not be equally good for a female. To suggest that male and female experiences are equal, as in, similar enough to compare in this regard.. seems to assume too many variables that haven't been tested for.

I find the results interesting, but I think there are many more questions this opens up.. and assuming that the data can be stretched out.. implying meaning seems counterintuitive and an over-generalization.

Is it possible that there is still a prejudice against women students, in the sense that they are still perceived as simply putting time into their studies until they are able to find the right mate, at which point they will cease their studies, get married, and start a family? Hence any effort a professor might spend mentoring such a female student is, from a career perspective, time wasted on their part?

[...] Sociological Images points to a study showing a bias among science professors against hiring female undergraduates for a lab job – even when the person doing the hiring is female. The professors were asked to evaluate mock job applications. The applications were identical, but the gender of the applicant was randomised – half were named “John,” and half, “Jennifer.” As Sociological Images puts it, Just thinking an applicant was female seems to have touched off an unconscious bias that led [the professors] to see female candidates negatively and to be less willing to spend time mentoring them. [...]

Based on this recent report from England, the case for increased gender equity in physics is likely not going to be resolved in the near future, since less than half of girls actually continue on to take A-levels in physics.

[...] hear of something like this, it just feels incredible that they could be so ignorant. I guess that most of these studies do not use scientists as subjects, but I don’t think that’s much of an excuse for thinking that scientists have magical [...]

[...]  Here’s compelling evidence for unconscious gender bias among faculty, specifically in some natural and biological science [...]

[...]  Here’s compelling evidence for unconscious gender bias among faculty, specifically in some natural and biological science [...]

Excellent commentary . I learned a lot from the details - Does anyone know where I might get a template a form version to fill out ?

Understanding The Gender Pay Gap And How It Affects Women - Atheism — June 10, 2020

[…] that examine gender discrimination in the evaluation of student performance and in hiring, professor interest in mentoring students, even in the wording of job listings, have […]