For the last week of December, we’re re-posting some of our favorite posts from 2012. Originally cross-posted at Family Inequality.

The other day the New York Times had a Gray Matter science piece by the authors of a study in PLoS One that showed some people could identify gays and lesbians based only on quick flashes of their unadorned faces. They wrote:

We conducted experiments in which participants viewed facial photographs of men and women and then categorized each face as gay or straight. The photographs were seen very briefly, for 50 milliseconds, which was long enough for participants to know they’d seen a face, but probably not long enough to feel they knew much more. In addition, the photos were mostly devoid of cultural cues: hairstyles were digitally removed, and no faces had makeup, piercings, eyeglasses or tattoos.

Since chance guessing would yield 50 percent accuracy, 60 percent might not seem impressive. But the effect is statistically significant — several times above the margin of error. Furthermore, the effect has been highly replicable: we ourselves have consistently discovered such effects in more than a dozen experiments.

This may be seen as confirmation of the inborn nature of sexual orientation, if it can be detected by a quick glance at facial features. 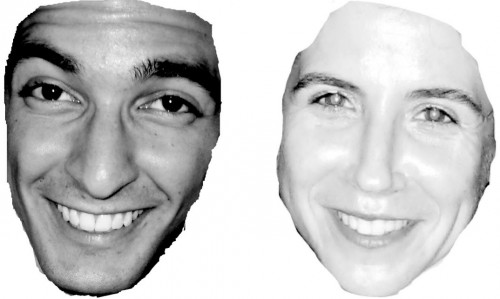 There is a statistical issue here that I leave to others to consider: the sample of Facebook pictures the researchers used was 48% gay/lesbian (111/233 men, 87/180 women). So if, as they say, it is 64% accurate at detecting lesbians, and 57% accurate at detecting gay men, how useful is gaydar in real life (when about 3.5% of people are gay or lesbian, when people aren’t reduced to just their naked, hairless facial features, and you know a lot of people’s sexual orientations from other sources)? I don’t know, but I’m guessing not much.

Anyway, I have a serious basic reservation about studies like this — like those that look for finger-length, hair-whorl, twin patterns, and other biological signs of sexual orientation. To do it, the researchers have to decide who has what sexual orientation in the first place — and that’s half the puzzle. This is unremarked on in the gaydar study or the op-ed, and appears to cause no angst among the researchers. They got their pictures from Facebook profiles of people who self-identified as gay/lesbian or straight (I don’t know if that was from the “interested in” Facebook option, or something else on their profiles).

Sexual orientation is multidimensional and determined by many different things — some combination of (presumably many) genes, hormonal exposures, lived experiences. And for some people at least, it changes over the course of their lives. That’s why it’s hard to measure.

Consider, for example, a scenario in which someone who felt gay at a young age married heterogamously anyway — not too uncommon. Would such a person self-identify as gay on Facebook? Probably not. But if someone in that same situation got divorced and then came out of the closet they probably would self-identify as gay then.

Consider another new study, in the Archives of Sexual Behavior, which used a large sample of people interviewed 10 years apart. They found changes in sexual orientation were not that rare. Here is my table based on their results:

Overall, 2% of people changed their response to the sexual orientation identity question. That’s not that many — but then only 2.5% reported homosexual or bisexual identities in the first place.

In short, self identification may be the best standard we have for sexual orientation identity (which isn’t the same as sexual behavior), but it’s not a good fit for studies trying to get at deep-down gay/straight-ness, like the gaydar study or the biological studies.

And we need to keep in mind that this is all complicated by social stigma around sexual orientation. So who identifies as what, and to whom, is never free from political or power issues.

So, people can identify straight or gay significantly better than chance (p<.002), based on three frames of picture. Any fewer, and most participants would honestly deny that they had seen a face.

Sorry, Phillip, I don't understand your table at all. Could you explain, please?

I would also like to point out that there are cultural expressions that haven't been removed in the pitctures, such as make up, grooming of the eyebrows or their expression in the photos.

But this study makes me a bit uneasy, seeing as the gay community is pretty much agreed that the gaydar is based on stereotypes and cultural expressions. Acnedotal as it may be, the dominant story of gay people going abroad or across the pond is that their gaydar is compromised due to the different norms in gender roles and stereotypes surrounding sexuality - for example, people comming to Scendinavia often read almost all men as gay due to the mainstream fashion being that close to what they consider a queer expression. With both the gay and straight community being so diverse and so overlapping, this study really comes across as an attempt to point out gay people as different.

Thank you for laying into that study! The main thing (among others) that bothers me is the false dichotomy of classifying the faces as "gay" or "straight," with nothing in between.

If you're interested in the fluidity of sexual preference, I highly recommend Lisa Diamond's book "Sexual Fluidity" -- her long-term study follows a group of women and finds that their sexual orientation changes over time. The changes can go any direction, from  bisexual or lesbian to straight, or from straight to lesbian or bi.

i agree. facebook photos are not a neutral stimulus and may have uncontrolled aspects in the expression of the face etc. if these results were replicated with photos taken with the same expression/orientation/magnification, the results might be more valid, though again i'm really not sure what the overall aim of these studies are- at best they seem to be operating on a more deterministic view of sexuality which can be harmful.

Amazing how much impact the media has given to a mere 3.5% of the population. How many single by choice straight people are out there who are unable to extend benefits to someone they might care to? Yet, not a peep out of the media on that angle.
3.5% and same sex marriage has become a political hot button. Kudos to the media for keeping the truly important issues in front of us.

Given that tests of ESP consistently show numbers close to this gaydar study on guessing an unseen symbol, and that anything having to due with sex gets even better results on ESP tests, you could argue that it is extrasensory perception just as much as innate biology.

[...] is another critique that points to a general problem with biological [...]