It’s an American tradition.  In fact, FBI data on background checks suggests that more guns were given as Christmas gifts last year than any previous year (source).  One-and-a-half million background checks were ordered in December 2011, more than any other month in American history.  Data from 2012 shows another uptick. 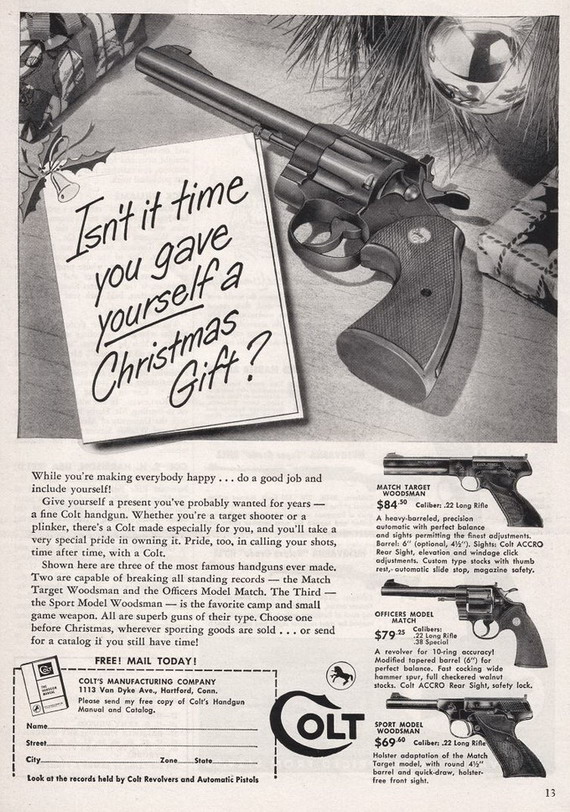 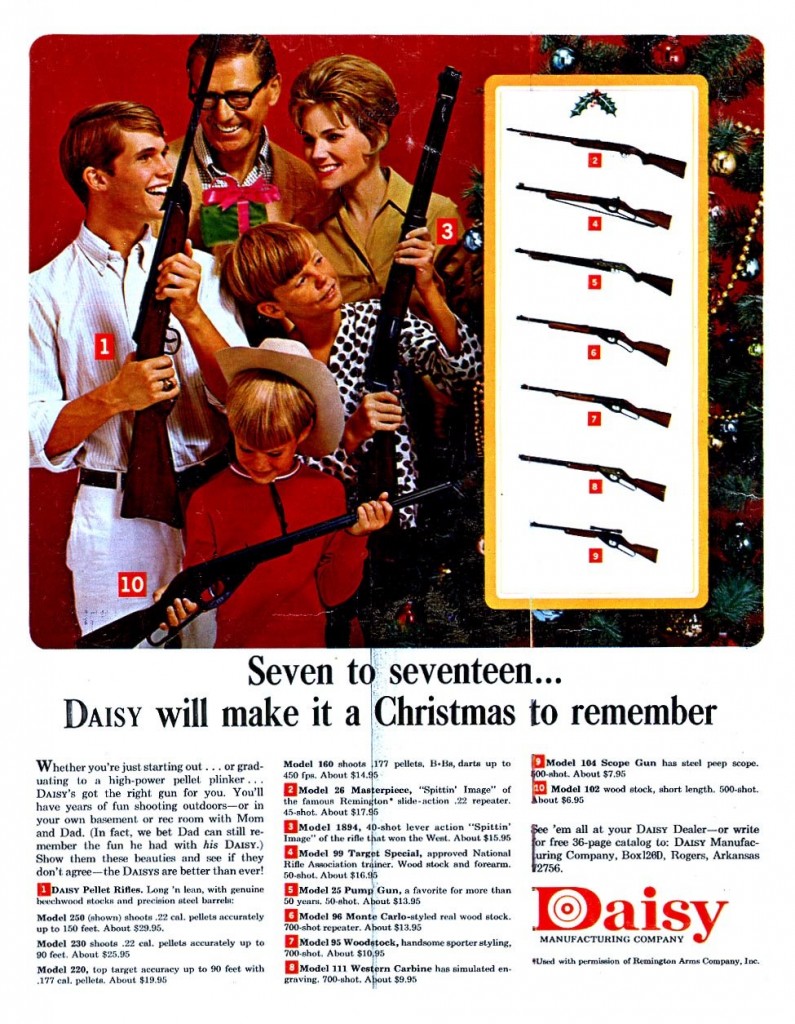 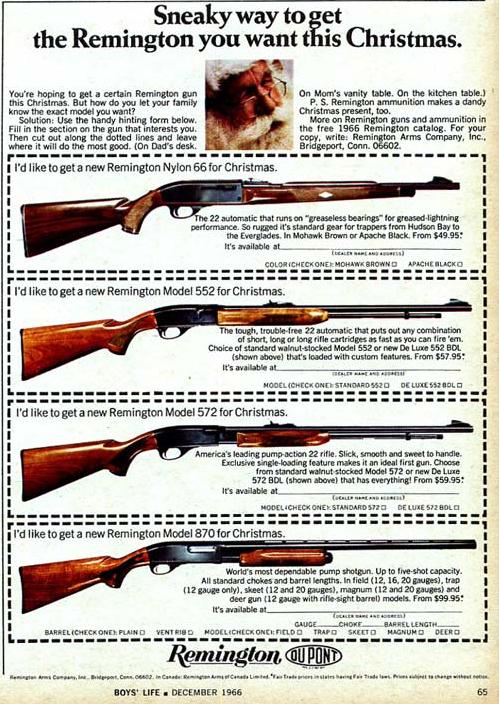 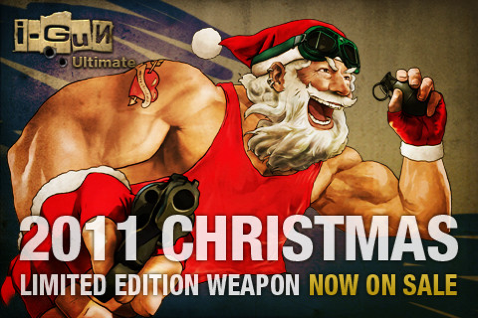 I always wanted a BB gun from Santa Claus, but my mom told me I'd shoot my eye out.

Without some context, it's hard to take this as an example of "how things change".

Were these ads in major magazines? Or more gun-oriented magazines? After all, I bet we could find ads today recommending guns for Christmas, it's just a matter of *where*.

They are a big ticket item. If I get a new handgun it'll probably be for Xmas.

I don't have a bias against guns. I think that target shooting is no different than archery, fishing, or any similar sport.

Granted, I'd be a bit surprised if I saw a gun advertisement in the December issue of Cosmopolitan. But then, I don't read Cosmo...

[...] mobsters and there’s as many guns in Montréal than sane people in Washington. So when I see this kind of ads, my jaw almost falls on the [...]

1939.
I'm surprised the post doesn't address that, during Christmas of 1939, the US had just passed the Neutrality Act which allowed arms sales to non-belligerent nations in WWII.
See http://en.wikipedia.org/wiki/1939#November

Also, the lady in the advert isn't holding a gun. What would the implications have been of her holding a rifle? It's not like Women didn't use firearms in the depression era.
However, post-depression, I wonder if the image of a woman holding a firearm necessarily suggested something sinister...

I saw the first image while scrolling and saw only the gun and "isn't it time you gave YOURSELF a Christmas gift?" I read it for a horrifying moment as pro-suicide. I'm not sure how people want to interpret that (as a white, middle class collegey kid, guns = symbol for suicide in my mind? I have no idea) but it sure made me feel gross once I realized what the ad was actually for...

"...but only to point out how things change."

As a brief sidenote I find it interesting that in the second ad, it is drawn so that there is a clear family hierarchy based on height. IRL the 17-year-old would likely be taller than the mother and probably the father too, but in this ad he is just slightly shorter and looking up to his parents.

Now that I've gotten over how lame the guns are that they were advertising, this is actually really quite interesting.

To then say, "This is not to say that either guns or cigarettes are bad Christmas gifts," doesn't actually negate the fact that she is picking up on something negative about both of these items to have them lumped randomly together. Why else would you lump them together? Smoking is obviously bad for you, the inference is clear.

What has seemed to have changed in the intervening years is society's attitude towards guns from recreational sporting equipment that the whole family can enjoy to something sinister. As posters Chlorine, Claire and Ashley De seem to associate them with suicide, and I imagine other people will also think about other kinds of killings. A bottle of tylenol would seem like as likely a suicide tool as a gun and the average kitchen knife more widely used as murder weapon. These items were not so purposed. Guns have an obvious military history and are used for hunting as well as killing people, so the associations with this are founded but they have also enjoyed a widespread sporting appeal and hunting was our ancestral way of providing food.

Something wholesome has definitely been taken out of society to have us view these ads as anything but sporting equipment ads. Which is very different from a cigarette ad which is cynically selling poison.

I am an American man, and I have decided to boycott American women. In a nutshell, American women are the most likely to cheat on you, to divorce you, to get fat, to steal half of your money in the divorce courts, don't know how to cook or clean, don't want to have children, etc. Therefore, what intelligent man would want to get involved with American women?

American women are generally immature, selfish, extremely arrogant and self-centered, mentally unstable, irresponsible, and highly unchaste. The behavior of most American women is utterly disgusting, to say the least.

I am a reasonably intelligent, well-read college educated forty something who grew up in small-town middle America, and I don't find anything odd or out of place about these ads at all. We receive giant Cabela's catalogs at our house on a routine basis. Those folks have made an art of marketing weapons for Christmas presents.

My father received a deer hunting rifle for Christmas when he was 13 that has served him very well and is one of his most treasured possessions. I used that same rifle for my first deer hunt this fall (I didn't see any deer except the ones my brother-in-law shot). I have absolutely no doubt that had I been born a boy I would have received a rifle as a Christmas gift at some point and I would have been very pleased. Despite having been born into a avid hunting family with no brothers, it was never ever suggested that my sisters or I should take up the sport.

What is, from my perspective at least, more indicative of changing times is the fact that now hunting is specifically marketed to women. http://www.huntingwoman.com/

This last hunting season my husband's thirteen year-old niece received a rifle for a gift and had her first successful hunt. That kind of thing was unheard of when I was growing up.

I'm a 26-year-old guy from the South, and those ads didn't even really stand out to me as being odd. The Colt ad was a bit of a shock, as I've not seen an ad specifically for the Colt revolvers before - when I think "Colt", I tend to think "AR-15" or ".45 ACP".

Then again, I edit a site with a handgun reviews section, so maybe I'm not exactly the average guy here.

Man those Daisy ads were effective, as I recall well from my Seventies childhood.

I personally had a rifle on my Christmas list this year, and a lifetime deer permit for my young sons.

My initial read of the ad was definitely "would you like some nice suicide?"

I wonder if it's because today's culture, we think of a handgun to the temple as the a quintessential suicide of suicide based on depictions of suicide in film. The gun is pointed in the "right" direction, it's on a desk, it's next to a handwritten note, and it's Christmas time. The black and white print is dreary to modern people.

I doubt those associations existed and if Colt would run a similar kind of ad today.

Note you could easily break the suicide framing by having Santa in your house with a gun, or simply showing more than one gun (in the setting of the main image).

The lower image is definitely happier (and in color).

Holy crap, that first one really looks like a sex toy!

The decrease in owners/increase in guns angle is really interesting. I think it's showing a few trends.

One is that, on the farm or in the country, you have a strong need for a .22 or a shotgun just as a pest deterrent. Many farmers I know aren't really gun guys, but they still have one as one of the basic tools of rural living. With the transition to a more urban population, you have fewer guns owned for this purpose.

There's also the fact that fewer of our households have a veteran living in them. Post WW2 or Korea, there were a large number of returning vets, and many of them continued their practice with firearms after returning. You see this a fair amount still, with people coming back from the wars in Iraq or Afghanistan and purchasing AR-15's with controls similar to what they were trained with in the military.

Finally, with the rise of the urban and suburban 'Gun Culture 2.0', there has been an increase in the popularity of shooting sports. Practitioners of these games tend to practice a lot, buy a lot of ammunition, and in many cases buy large numbers of guns as they try out different models that their friends and competitors are using. Heck, just to show up for a  '3-gun' competition (so named because they involve competing with a shotgun, a rifle, and a pistol) you need more guns in your household than the average farmhouse with a shotgun and a .22.

Sociological Images post Newtown, CT shooting: Hey guys, guns are really really horrible and let's focus on that specifically and resurrect posts about guns and focus on guns for a while.

Q: Why not focus on mental illness?
A: GUNS ARE TOTES BAD 115% OF THE TIME OKTHNXBAI

Season's Greetings from Arizona!
This image was shot a year ago. The people in it didn't make the shot as an insensitive response to the events in Connecticut.
http://funnydoom.com/wp-content/gallery/14santa039s_weapon_inventory/santas_weapon_inventory-0001.jpg

Wow, Lisa and Gwen made a horribly obvious error... they substituted the incorrect term "number of gun owners" for what is actually the "rate of gun ownership."

That’s an increase in gun owning households of about 2.5 million.

Did these two PhDs both make a 'C' level undergrad error or are they being deliberately misleading?