Since the school shooting last Friday, intense attention has focused on gun ownership in the U.S., as well as the likelihood of real changes in gun regulation. Nate Silver posted about characteristics associated with gun ownership.

Not surprisingly, gun ownership is strongly correlated with political party, with Republicans much more likely to own guns than Democrats. As Silver explains,

Whether someone owns a gun is a more powerful predictor of a person’s political party than her gender, whether she identifies as gay or lesbian, whether she is Hispanic, whether she lives in the South or a number of other demographic characteristics.

That gap between the political parties has grown significantly since he early 1990s, as fewer and fewer Democrat and Independent households own guns: 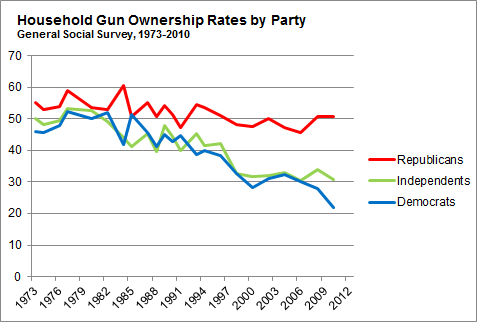 There’s a gender gap in gun ownership, but according to exit polling of 2008 voters, it is largely due to Democrats; Republican women are only slightly less likely to own guns than Republican men:

Silver also presents differences by urban/suburban/rural location, income, military service, religious affiliation, and several other characteristics. These demographics matter, but the impact of political party remains clear, even accounting for other differences.

And Silver argues the gap may grow. Younger Democrats are less likely to own guns than older Democrats, but there’s very little difference between Republicans of different age groups:

Thus, as the two political parties consider their responses in the wake of the Sandy Hook shooting, they face very different realities in terms of their members’ gun ownership and likely personal stake in arguments about possible gun regulations.

What I learned from this post is that gun ownership is high among both political coalitions.

How much of the Democrat and Independent decrease is because of political polarization?  "My party has left me" attitudes.

Does this study take in to account illegally owned guns? Seems simplistic to me, if Democrats want gun control, they should be giving up their guns in droves, setting the example. But don't think that will ever happen.

How might sociology approach an issue such as gun ownership law differently from the way economic or political science would study the same issue?