When News and Markets Collide

Two days after 6 adults and 20 elementary school children were shot and killed in Newtown, CT, the Miami Herald homepage looked like this: 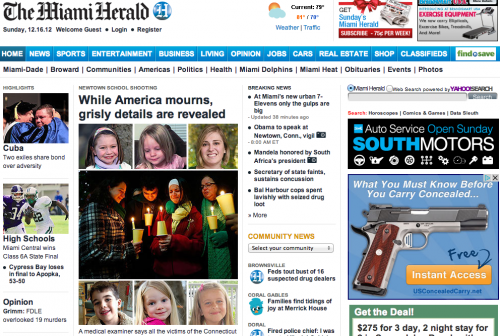 On the left side of this screenshot, the Herald shows images of the dead and notes how “America mourns” their loss. At right, one of their five-or-so rotating advertisements shows a large handgun and links to a website for the U.S. Concealed Carry Association, a company that sells – among other things – strategies to quickly arrange for conceal carry permits in your state.

The company’s tagline: “Knowledge is your best weapon. Preparation is your best defense.” Apparently, to a segment of the population this visual coupling advertisement read something like, “Mourn for now. Lock and load for next time.”

That such a provocative advertisement would appear in close proximity to a sensitive news story is unlikely to be accidental. News outlets are quite smart about what they post – and where – both in terms of news products and paid content.

But this juxtaposition of weaponry and those who have died from such products represents more than a short-term economic choice. Instead, it reflects the fact that we live in a culture that strongly supports gun ownership and loose gun control laws.  Had the newspaper thought that such an advertisement — published at this particular time and in this particular way — would ostracize their audience or advertisers, they wouldn’t have run it.

Some call the media the “fourth estate” – an institution that, alongside the courts, the oval office, and congress, keeps our country in balance. The juxtaposition in that screenshot, however, calls into question this role for the traditional media. Instead, they are simply reflecting the status quo, one largely controlled by those who are already in power. If this is the case, we can’t count on the media to check the power elite.  Any real change, then, is going to come from collective action and alternative media.

Robert Gutsche Jr. is an assistant professor in the School of Journalism and Mass Communication at Florida International University. His research deals with the sociology of news and news as a cultural artifact.

Or perhaps for the outsider looking in.

I'd be very surprised if the newspaper editors made that level of a decision. That's not how internet advertising normally works.

It's very likely that the Miami herald buys advertising from a larger advertising conglomerate, who then places ads from their customers on the page based on keywords in the story. It's all algorithm driven.

There's still an interesting story here regarding your main point (obviously some advertising companies do not accept ads from firearms training or advocacy groups), but saying that this was entirely intentional on the part of the Herald's editors is probably not accurate.

Could this be an example of behavioural advertising fail? Did you delete cookies?

My guess is that it had more to do with the randomness of the web and the ad package. Newspapers through history have had an excellent record on paper, where randomness is much more under control. Anytime a mass murder occurred or an airline crash, all ads for related products were killed. Plane goes down, all airline ads stripped. A gunman goes crazy, all weaponry ads stripped. So I, too, doubt this was intentional or knowing or venal. I'd say they haven't had to figure out how to tame randomness enough to put in place the safeguards from the print platform. One must assume they're now working feverishly on that.

I've come to expect this level of unresearched "I'll just write the first thing the comes to my mind" articles from Dr. Wade (this is just a hobby, after all), but how can a supposed PROFESSOR at a school of journalism so egregiously misrepresent the four estates and the nature of online advertising? These are very basic concepts that most high school students have already mastered.
This is all one big sociological experiment, right? You are testing out the fallacy of Argument From Authority, correct? The point is to see if putting the letters "Ph.D." after the author's name in the by line and claiming the author teaches at a "School of Journalism and Mass Communication" will cause people to overlook the basic flaws when it comes to high-school-level common knowledge and accept the author's claims as factual and/or relevant at all?

Because the alternative would mean that 2 PhDs (assuming Lisa reads these articles from others) not only don't understand the bare-bones basics of how online advertising works (algorithms decide the ads based on the words in the article and the browsing history stored in the user's cookies, not some newspaper editor hand-selecting them), but they honestly believe that "the three estates" refer to the three branches of the US government.

You can SEE the little blue triangle on that gun ad that means it's from a cookie-driven third-party service. Sigh. Now, we could have a conversation about the keywords that the gun company probably set up when they bought ad space with the third party system, but blaming the paper is failing the internet.

It's almost certain the gun ad is there because of certain keywords in the article.  That's usually how advertising works (along with other things like tracking cookies and your Facebook profile)

As an aside, I'm surprised to see a CCW ad showing a 1911. That's a big and heavy gun to carry concealed. (Full disclosure: I own a S&W 1911 and would know.) Not to mention that that model looks like a competition pistol, possibly the S&W 1911 DK model, not a service pistol. I would expect them to choose a smaller and lighter gun that would appeal to more people interested in getting their CCW.

"That such a provocative advertisement would appear in close proximity to
a sensitive news story is unlikely to be accidental. News outlets are
quite smart about what they post – and where – both in terms of news
products and paid content."

as someone who works in the software development side for a media company, i can confirm that it very much is accidental and we are constantly looking for better ways to avoid this kind of ad pairing up with this kind of story, the most common example being an airline ad next to a story about a plane crash. it's not as easy a problem to fix as the layman might think as story pages are largely automated in their creation.

While I'm aware that today's websites deliver personalized
information to each user based on their browsing habits, I believe that my
observation about the Herald's apathy about ensuring against such a
juxtaposition does indeed have merit. To suggest that this image, appearing as
it did that day, was just a fluke doesn't seem to recognize the decisions that
were made to put “the computer in charge” in advertising and determining
content/advertisements. Such an approach smacks of technological determinism and
removes any responsibility of the journalists and news business execs. At a
cultural level, all of these decisions are intentional: whether it be allowing
algorithms that sell guns or having one person place it there themselves.
Thanks for pointing out how the argument could be better explicated, but I hope
this also helps express my interest in these images.

Maybe there should be a post written that explores how our culture is increasingly being administered by algorithms and what the potential consequences of that may be? After all, right here we have real humans discussing the nuances of the sociological consequences of computer-generated juxtapositions that some find offensive.

If nothing else, advertising algorithms would by their very nature tend to reinforce the status quo while at the same time inducing some rather stressful dissonance among large segments of the audience when things like massacres and gun ads appear next to each other, yet the publisher of any such potentially-offensive or disturbing juxtaposition can deny any responsibility for inducing that stress by blaming the algorithm.

But in a way, that strikes me as being analogous to blaming an employee for what they do while representing the company; while offending employees are generally fired, the company also suffers in some way (loss of audience, a tarnished reputation -assuming there's one left to tarnish-, official sanction if an act is egregious, etc.). But if it's an algoritm's fault, then what could anyone have possibly done to stop it?

Blaming an algorithm that was paid for by the company and used to generate revenue for it (sounds like an employee to me!) as if it was an independent, sentient being that does it's own thing and can't be controlled (yet it controls the publication's front page!) is just as ridiculous and unproductive as blaming the Editor of a news site for the precise content such an algorithm generates.

Sure, the ads are generated individually at the end-user side and so can't be proofread by someone at the head office before appearing in our browser, but that just means the deployment of this technology may have been a wee bit premature; in other words this is the publication's problem, not the audience's but so far the response has been to blame the technology (which almost sounds superstitious to me; it wasn't our fault, the internet spirits put it there!).

While the Editor is not directly responsible for gun ads appearing next to stories about a massacre, he or she IS responsible for buying and installing technology that offended the hell out of a lot of people (but that isn't illegal, so it will continue). At that point, the only real recourse is for people to quit visiting such news sites and put them out of business, unless of course they interpret the juxtaposition as empowering (which many do). Still, when considered in a larger context, how much of our society, or rather what we believe to be "our" society, is really being crafted by increasingly-complex algorithms, and what that might mean as far as where we're headed?