Bob Z. and Dmitriy T.M. sent us a link to a vintage collection of gun advertising, organized by decade, that shows some interesting trends.

In the 1900s and 1910s, gun advertising frequently simply touted the benefits of the gun itself, ignoring completely any indication as to what the gun was for: 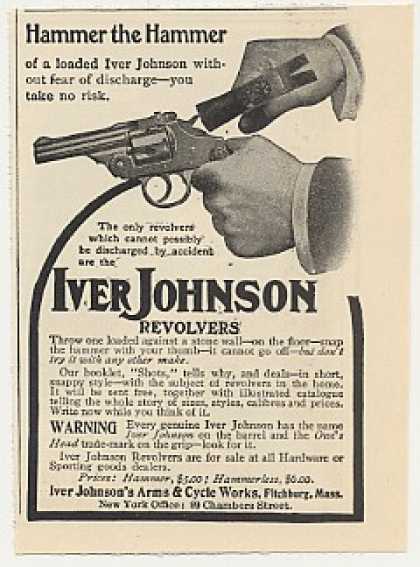 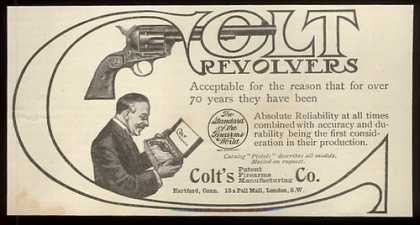 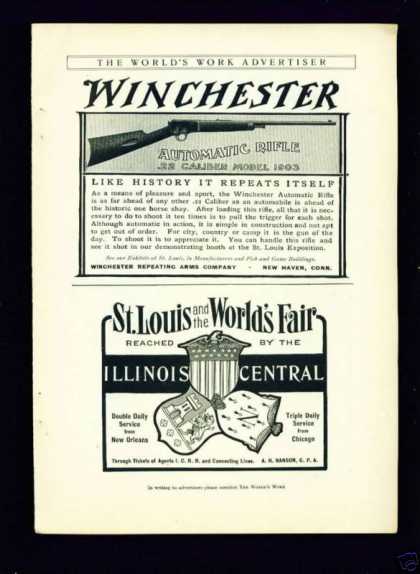 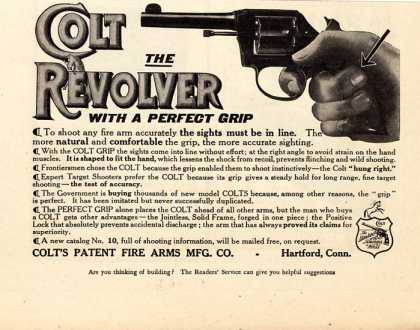 In the ’20s and ’30s, gun advertising more frequently involved a hunting or pest-reduction theme: 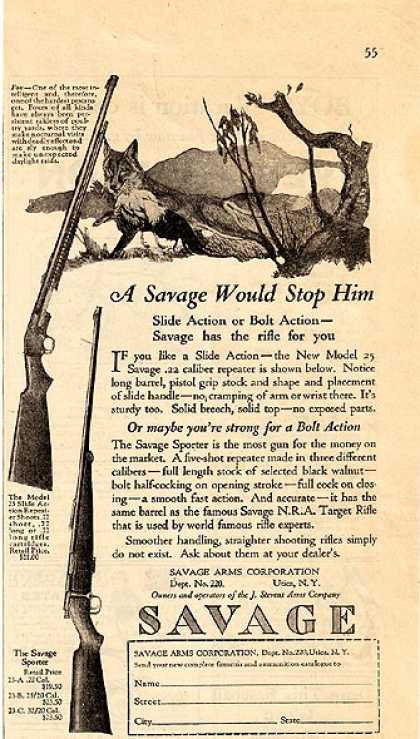 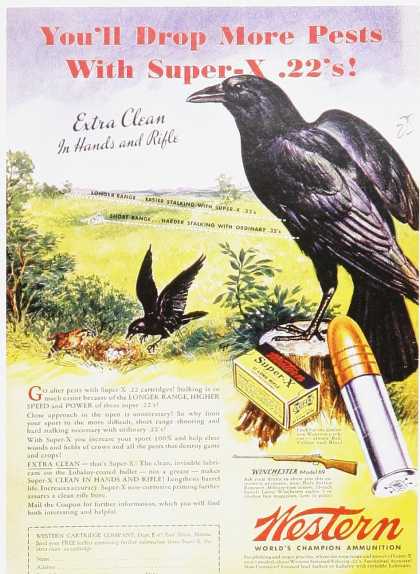 This theme continued through the 40s, but alongside a new theme, war (i.e., World War II): 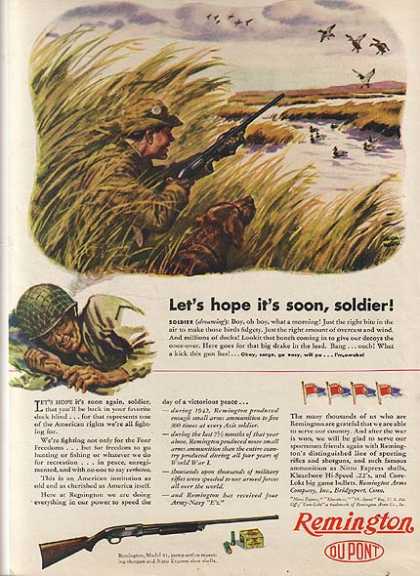 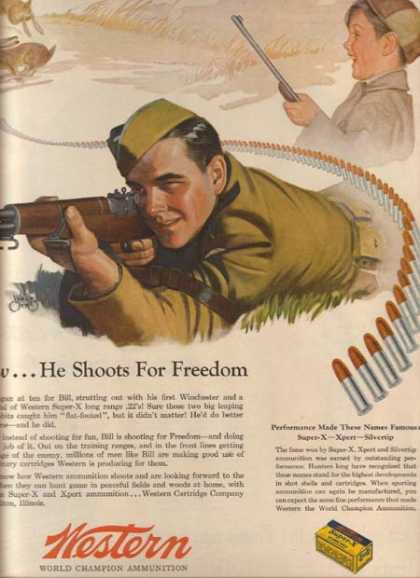 Then, in the 1960s, the war theme disappeared and the hunting theme continued, this time with a new twist. Instead of just hunting for food (and sport) or to protect your property, ads included the hunting of exotic game solely for sport: 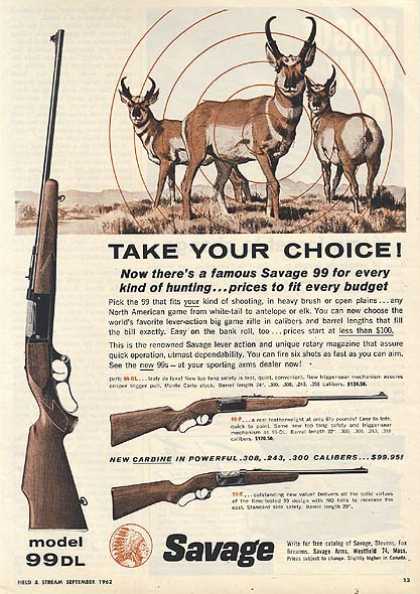 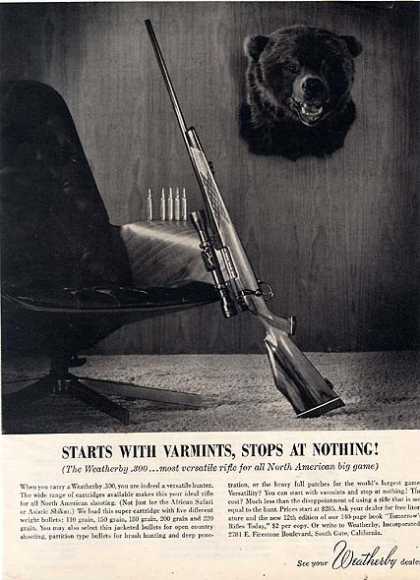 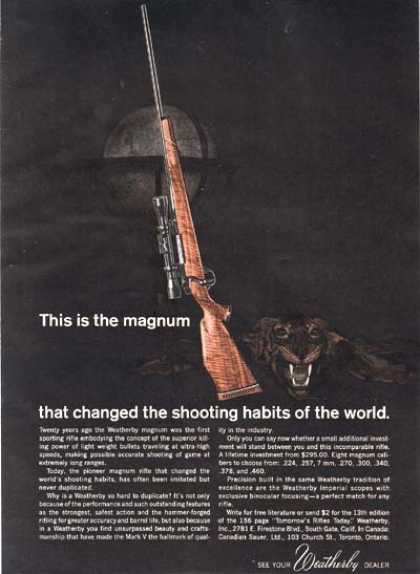 Since the 1990s, we’ve seen a new kind of gun advertising in which self-defense is the selling point.  Interestingly, this new marketing strategy is designed to bring in women, gays and lesbians, people of color, and kids.

Notably, if you are unfortunate enough to be assaulted, carrying a gun makes it more likely that you’ll be shot in the encounter.

The "antelope" in this add (pronghorn) aren't exactly exotic game. They are extremely numerous in the west (outnumbering people in the state I grew up in) and folks surely eat them.

I wonder if the early gun ads included less emphasis on what you'd do with them simply because gun ownership was more common; you didn't have to paint these gun use scenarios because they were already part of people's lives. Instead, they'd be more interested in details like (in the first ad) less chance of accidental firings.

I am including a link to an image of a 1913 advertisement for the Savage Automatic, which I instantly thought of when I saw the title of this post -- my father has an original copy of this, which is framed in our house.
http://www.magazineart.org/main.php?g2_view=core.DownloadItem&g2_itemId=15820&g2_serialNumber=2

I see the exotic game hunting and WWII trends, but I'm not so sure about the first trend you've listed.

3 out of 4 of the ads you've shown from the 1900's are ads for revolvers. Revolvers are handguns, designed for self defense. Here's an ad for a rifle from the same collection on the "1900" page.

This ad emphasizes what the gun is for: hunting. Browsing the site, I couldn't find any handgun ads from any of the decades that depicted a handgun in use. I think the trend here (if there is one) is that handguns, across decades, are advertised by, "the benefits of the gun itself," rather than, "what the gun [is] for."

Interestingly, this 1904 ad, found on another site, touts "the benefits of the gun itself" as well as it's intended use.

Can someone please explain to me how ravens (I think those are ravens?) are pests? I think I must be missing something.

I don't really think this a fair generalization. The first few adds are for handguns, then .22's and shotguns, and then larger .308's and so on. One ad is for ammunition, and not the gun itself.

These guns are tools used for very different purposes. You wouldn't want to blow a dollar a round to shoot crows or foxes, for instance. And most people don't hunt with revolvers.

Wouldn't you expect different ads for different sorts of tools?

[...] Historical Trends in Gun Advertising. CommentSubscribe You may also like... No related posts Comments There are no comments just yet, why not be the first? Leave a Comment Required Required (Will not be published) [...]

[...] the full article here CommentSubscribe You may also like... No related posts Comments There are no comments just yet, [...]

Jesus Christ, we get it already, you've got a huge boner for gun violence. Post about something else for cryin' out loud!!!

"carrying a gun makes it more likely that you’ll be shot in the encounter."

I think that study proves its more likely you'll be shot IN PHILADELPHIA. It doesn't say much about the kind of social conditions in many other places in the USA.

Carrying a gun also makes you more likely to successfully resist rape. So, there's that, too.

It would be more interesting if this showed the ads from the last two decades for comparison.

[...] But since the 1970′s NRA push to have guns be an individual right, we have seen cases such as the District of Columbia v. Heller, decide in 2008 that it is unconstituional for the government to outlaw handguns on the grounds that “handguns are the most popular weapon chosen by Americans for self-defense in the home, and a complete prohibition of their use is invalid.” (You can even see how gun ads have changed across time with these messages.) [...]

It seems to me like this is a great start to a piece taking a closer look at how guns are advertised and such, but it seems to me that what most people here are reacting to is that there are not enough advertisments that form a cohesive theme, and that leaves any argument, explicit or otherwise, with a lot of holes in it. A more comprehensive look at gun ads I think would yield a better picture I think. Very interesting subject though!