Women, Opportunity, and the Military

Pew Research Center reports that, as of 2010, women make up about 15% of enlisted soldiers and commissioned officers: 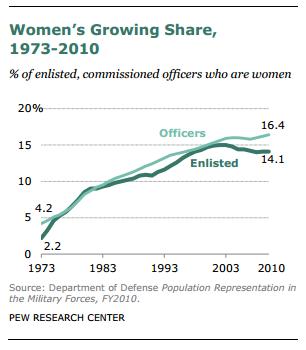 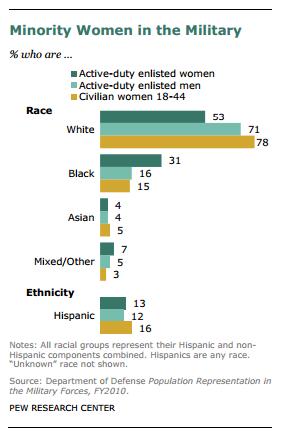 A larger proportion of women, compared to men, said that they joined the military because it was difficult to find a good civilian job: 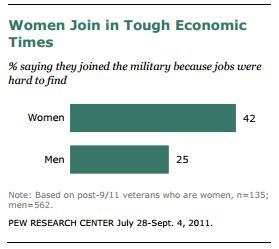 They were just as likely as men, however, to report other more common reasons for joining: 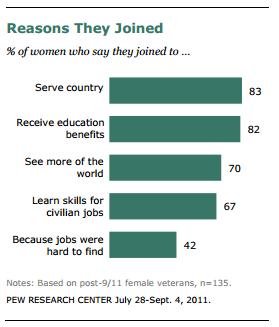 Interestingly, women reported high levels of strain re-entering the civilian population and the majority believe that the wars in Afghanistan and Iraq are not worth fighting: 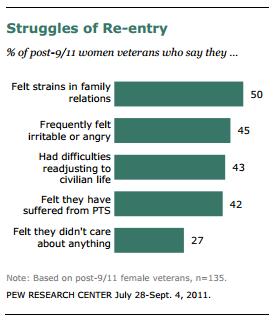 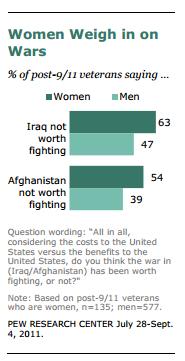 Nevertheless, a large majority felt that entering the military was good for their personal growth and career opportunities: 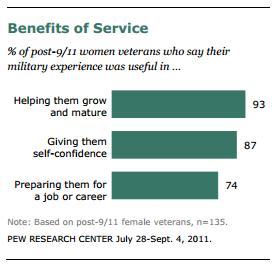 [...] that, as of 2010, women make up about 15% of enlisted soldiers and commissioned officers:See on thesocietypages.org Sharen mit:TwitterFacebookGoogle +1TumblrPinterestEmailMoreLinkedInLike this:LikeBe the first to [...]

WOMEN, OPPORTUNITY, AND THE MILITARY | Welcome to the Doctor's Office — December 14, 2012

Not all types of women are entering the military at the same rate.
Nearly a third of women in the military are Black, about twice their
proportion in the general population.

It would be useful as well to have a comparison with the enlisted population, not just the general population.

It seems interesting to me that more female veterans expressed discontent with the wars in Iraq and Afghanistan than male veterans. This seems to make sense when the majority of women's considerations of war are overwhelmingly negative. Could the fact that female veterans report more negative experiences during and side-effects after war be related to their negative feelings of war? Also interesting is the fact that a disproportionate amount of black women are involved in the military. Could this be due to the fact that economic inequality due to subtle discriminatory policies in hiring is forcing more black women into military service?